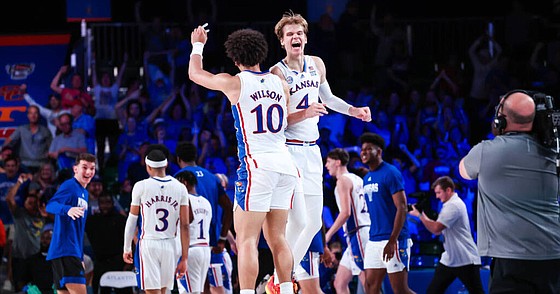 Kansas sophomore Bobby Pettiford’s wild layup on a deep 3-pointer with 0.2 seconds left in overtime helped No. 3 Kansas survive a scare from Wisconsin, 69-68 in the semifinals of the Battle 4 Atlantis Tournament on Thursday.

While the game-winning layup and kick set off a celebration that had Kansas fans chanting his name, neither Pettiford nor Kansas coach Bill Self left the gym saying the shot could be replayed.

“If he’s thinking about it, he’s not going to make it,” Self said. “It was natural and luckily he was able to do it. It was an athletic game. … I don’t know that he could do it again in 10 tries, but it was good that he did. It was a great shot.”

Pettiford’s shot came off a rare hit on the glass from the 6-foot-1 guard, who is more used to getting back on defense when shots are going up.

In this case, with Kansas down by one in the final seconds, there was no reason to worry about the defense once Zach Clemence let his 26-foot 3-pointer fly after Wisconsin’s defense broke up KU junior Jalen Wilson’s drive to the rim. .

“As soon as he shot it, I ran full speed, the ball fell into my hands, so I just flicked something and it went in,” a smiling Pettiford said after the win. “A bit of luck and skill at the same time.”

The finish was in stark contrast to how the entire match was played. Both teams struggled to come out of the gate offensively, but Kansas took control midway through the first half as Gradey Dick hit a pair of 3-pointers on back-to-back possessions.

Despite the Jayhawks leading 33-15 through 45 minutes of play, Wisconsin never went away.

Kansas led by 15 (41-26) midway through the second half, but saw the lead disappear completely when Wisconsin took a 52-50 lead. KU responded to that deficit with a 10-0 run, but also saw the cushion evaporate.

“They completely outplayed us,” Self said of the final minutes of regulation and overtime.

While Wisconsin’s style dictated the way the game was played in crunch moments, Kansas contributed to its own situation.

Although there were elements that went KU’s way. Wisconsin entered the game having given up just nine 3-pointers in four games all season, and the Jayhawks had made nine in that one alone.

Dick and McCullar made three apiece and Wilson hit a pair. None was bigger than McCullar’s bomb from the top of the key that forced overtime.

After Wisconsin went up by three late on a bucket by Tyler Wahl and a pair of free throws by Connor Essegian, KU’s Zach Clemence missed a 3-pointer from the corner with 16 seconds left in the game. However, Clemence chased down his miss and fired a pass to McCullar at the top of the key as he fell out of bounds. McCullar did the rest, confidently stepping into the shot and knocking it down.

That was a welcome sight for the Jayhawks, who opened the game 0-of-5 from the floor and 0-for-4 from 3-point range. McCullar finished with 18 points and nine rebounds, making seven of his next 11 shots after a cold start.

“I tried to keep playing,” McCullar said of his approach after a rough start. “My teammates kept encouraging me and I ended up hitting one late when we needed it.

Most of everything that happened late started with Wilson, who scored 29 points on 9-of-20 shooting and grabbed 14 rebounds in another outstanding individual effort from KU’s leading scorer.

However, Wisconsin knew that was going to be KU’s plan and began sending Wilson multiple bodies to keep them from beating them. Wilson stayed composed in those moments and did what he could to get to the free throw line or find opportunities for others.

The late chance by Pettiford, who had not scored all afternoon, was not a direct result of Wilson’s play. But his presence and willingness to put the game on his shoulders makes things easier for others.

Wilson, Pettiford, McCullar and their teammates couldn’t care less who gets the credit as far as the outcome goes according to Kansas.

Self added: “We weren’t the best team today. We made some plays that allowed us to win and I’m excited about the win and happy that we have a chance to play in the championship game tomorrow.

“We didn’t think it was going to be a pretty game, and from my point of view, it did.”

Friday’s championship game is scheduled for 6:30 p.m. on ESPN.