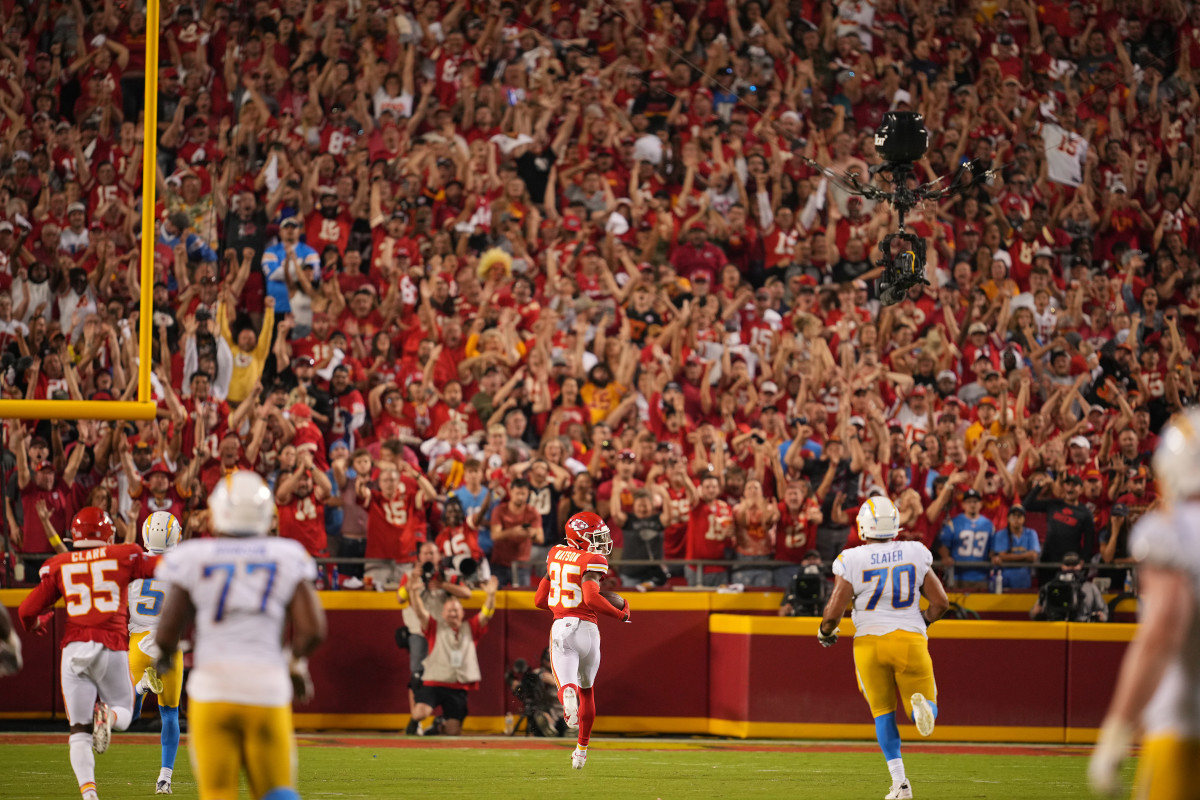 Despite a tough opening schedule, the Kansas City Chiefs reached the bye week with a 5-2 record. Before the season started, many Chiefs fans and people in the local and national media thought that general manager Brett Veach had hit a home run in the 2022 NFL Draft. Over the course of seven weeks, we saw how several of these draft picks contributed to the Chiefs and their winning ways.

Let’s take a look at each of the picks in the order they were drafted and grade them through the first part of the season.

Unfortunately for cornerback Trent McDuffie and the Chiefs, a hamstring injury during the Week 1 game against the Arizona Cardinals sent the freshman to IR. There was hope that McDuffie could return before the bye, but the coaching staff wanted to give him a few extra weeks of rest before returning him to the field. The ideal goal for McDuffie is to be able to get back with the first team Sunday night football against the Tennessee Titans in Week 9.

George Karlaftis had a great pre-season and came out of the gate with fire in his belly. In Week 1 of the NFL season, he had the most pressures of any defensive end with six. Through Week 7, he leads all rookies with 17 pressures. However, the disappointing statistic is so far only able to convert half of the bag. However, Karlaftis makes his presence known. Against the San Francisco 49ers, he forced quarterback Jimmy Garoppolo to throw an interception in the red zone and also pressured him later in the game when teammate Frank Clark got a safety on the play. Karlaftis will be looking to finish more games in the second half of the season and increase their mark in the process.

Unfortunately for Skyy Moore, he hasn’t been given many opportunities on offense so far this season. He played less than a handful of offensive snaps in the early weeks. While he’s gotten a bit more run throughout the season, he still hasn’t contributed much. Moore was given the opportunity to return punts to get his hands on the ball, but the experiment did not go well. He lost a critical fumble against the Indianapolis Colts that set the tone in a blowout early-season loss and had another muffed punt against the 49ers. He will need more looks as a receiver to increase his grade in the second half.

Bryan Cook has had an up and down campaign so far. Defensively, he didn’t play a ton of snaps and was burned (along with Rashad Fenton) for a touchdown against the Raiders. Cook has been a good special teams guy from the start and will have a solid role there throughout the season. He’ll likely be an alternate defensive player barring injury, so he’ll have to make the most of his opportunities when they come.

Leo Chenal’s playing time has been inconsistent at best. Defensive coordinator Steve Spagnuolo is still trying to figure out how to get the most out of him and pick his spots with Chenal. Some thought Chenal would have an extended workload when fellow defenseman Willie Gay Jr. suspended for a few games, but that wasn’t the case as he was still used about as much as before. Chenal will have to prove himself in his limited shots if he wants to have an expanded role.

After a good training camp, Joshua Williams struggled in the preseason finale and started the season as a special teams player. It wasn’t until Fenton’s injury finally brought Williams a chance. That chance just so happened to come against one of the best offenses in the NFL when the Buffalo Bills came to town. Williams struggled in one-on-one coverage against the Bills’ solid receivers, which was to be expected, but he got another chance the following week against the Niners and looked more comfortable. He even had his first interception of the season in a big spot in the red zone. Williams should continue to improve with more reps and will look to maintain his presence in the Chiefs secondary even with Fenton and McDuffie returning from injury.

Offensive lineman Darian Kinnard has been a healthy scratch for most of the season.

Isiah Pacheco was hit or miss. At times he looked explosive out of the backfield and at other times he was subdued or just didn’t get the proper opportunities to get into the flow. After back-to-back games with a combined three carries, Pacheco was given the green light as the starter against the 49ers just before the bye week and made the most of his opportunity by averaging 5.4 yards per carry. He averaged 4.9 yards per carry this season and scored his first NFL touchdown in Week 1. The Chiefs also used him as the primary kick returner. If Kansas City continues to use him as a starter after the bye, Pacheco could really take off and be one of the top rookies in this class by the end of the season.

Jaylen Watson has probably been the best of them all up to this point. He came out of the preseason as a late-round cornerback to work his way into the starting rotation after McDuffie went down. Watson struggled at times, but generally played well, especially considering where he was drafted. He also had the defensive play of the year up until this point, a 99-yard interception return for a touchdown to swing the momentum in the Chiefs’ favor and help them to a big win over the Los Angeles Chargers. The win gives the Chiefs a one-game lead over Los Angeles. If Watson continues to play well in his role, he will be a contributor for this team down the stretch and into the future.

Nazeeh Johnson was on the practice squad for much of the season. He was promoted to the active roster and played special teams during Weeks 4-6.

The mid-season grades may not look as great as many would have hoped before the season, but there is still time for each of these players to raise their grades as the season progresses. These players have been brought in to make an impact not only this year, but for many years to come as they grow together as a class. This is just the beginning of what could still be a very special draft class for Veach and the Chiefs.