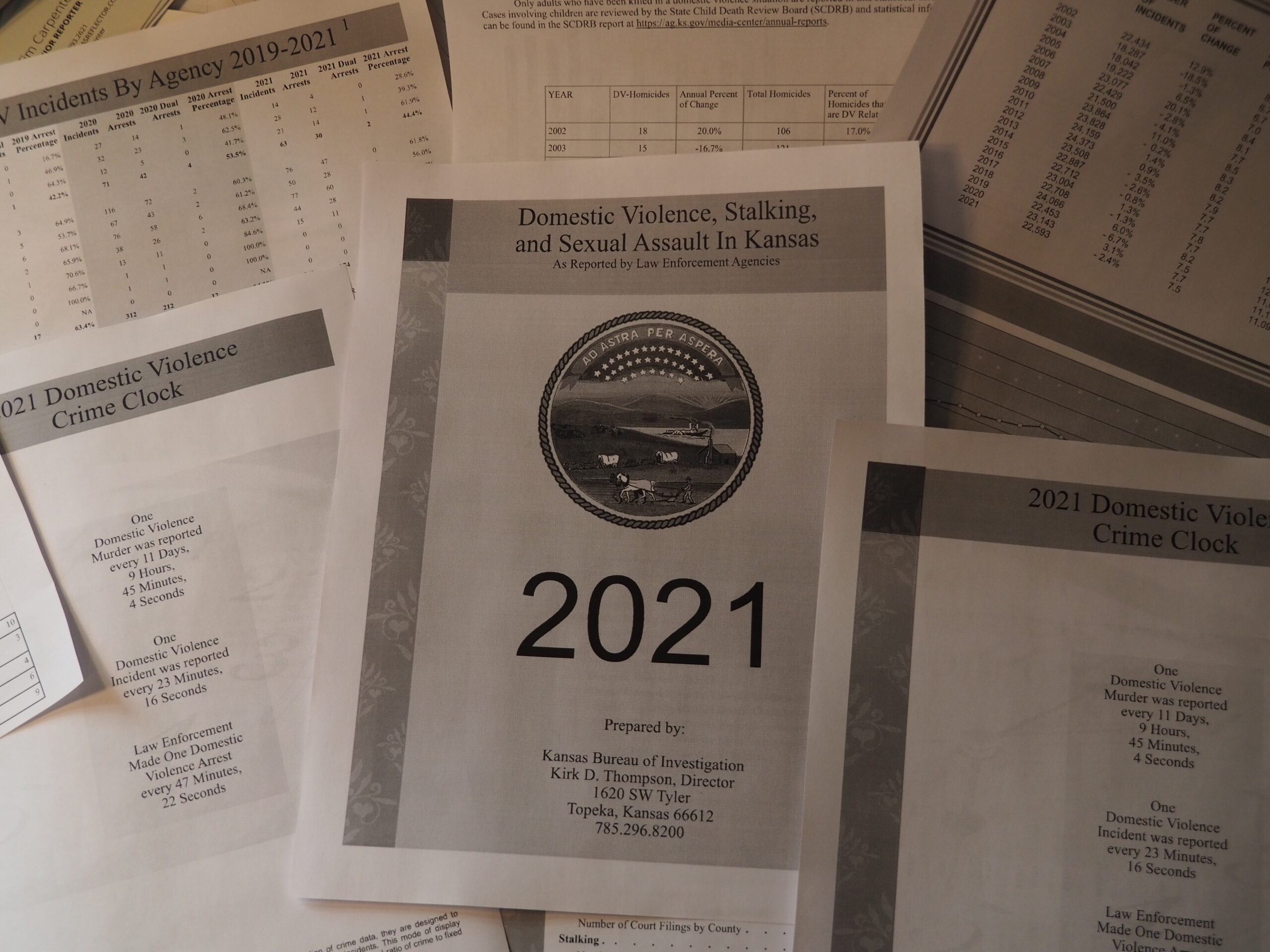 TOPEKA — Sedgwick County recorded the highest number of domestic violence incidents in Kansas during 2021 despite a decrease from the previous year, while three other populous counties saw an increase in reported domestic violence episodes.

A 2022 count of domestic violence generated by the Kansas Bureau of Investigation revealed 22,593 incidents statewide in 2021. That was 600 fewer than in 2020, but 150 more than in 2019. In Kansas, the KBI said 49% of reported incidents last year resulted in an arrest, which was the same as in the previous two years.

Joyce Grover, executive director of the Kansas Coalition Against Sexual and Domestic Violence, said the annual report does not account for every episode of domestic violence in the state. She described the extent of the trauma experienced by thousands of Kansans, mostly women, victims of this societal epidemic of violence, she said.

“First of all,” Grover said, “many, many people don’t call the police. What I see among the 22,000 calls are some very serious incidents … that have long-term effects.”

She said the domestic violence incidents included in the KBI review resulted in 900 kidnappings, 170 violent rapes, 100 strangulations, 3,000 aggravated assaults and 4,000 cases of criminal damage to property.

Differences in arrest rates between cities and counties reflect the priorities of law enforcement leadership, as well as the availability of personnel and funding to investigate and prosecute cases, Grover said.

Sedgwick County led the state’s 105 counties despite reporting 2,000 fewer domestic violence incidents in 2021 than in 2020, the KBI said. The county reported 6,235 in 2021, double the total in Johnson County. It’s startling because Sedgwick County has 90,000 fewer residents.

Sedgwick County arrested 2,717 alleged domestic violence offenders, making that move in 40% of cases. However, Johnson County made arrests 55% of the time.

Law enforcement agencies in Douglas, Shawnee and Wyandotte counties said they received more reports of domestic violence in 2021 than the previous year. Here are the 2021 arrest percentages for these counties: Douglas, 48%; Shawnee, 37%; and Wyandotte, 52%.

“Domestic violence is important to me,” Grant said. “I have my own experiences like many women. One has to be brave enough to start a conversation and be persistent in it. In some ways, people are afraid to open that box.”

Grant said the complex issue of domestic violence places a heavy burden on public safety and mental health systems. She said she was shocked that the Sedgwick County Commission refused to follow the lead of the Wichita City Council by contributing funds to develop a larger crisis center in Wichita.

She said the city should consider establishing a special municipal court for domestic violence cases and assigning offenders to 26-week behavioral intervention programs that can do more to correct violent tendencies than modest anger management training.

Phil Journey, a Sedgwick County District Court judge and former Kansas state senator, said his work in family court cases gave him a front-row seat to domestic violence. He is responsible for signing dozens of protection against abuse orders every week in Wichita.

“We’re No. 1. That’s terrible,” Journey said. “The entire state and region could do better. We have to do something, especially in Sedgwick County.

He introduced a package of bills related to domestic violence during the 2022 legislative session, but none received a House or Senate committee hearing.

He proposed measures to increase the penalty for breaching the protection against abuse order commonly referred to as the PFA.

“We’ve actually had people murdered with a restraining order in their pocket,” the judge said.

Journey also suggested that the state create a law mandating training for police officers to better identify the primary aggressor in domestic violence cases. In addition, he recommended a bill that would require officers to conduct a 10-question on-site assessment to provide judges with more information about the conditions in the home.

The KBI reported that the number of protective orders issued in 2021 rose more than 20% in Kansas to 8,205. It was the highest number of PFAs issued by judges since 2018, when 8,474 were approved. The number of PFAs granted in 2021 expanded in counties Johnson, Riley, Sedgwick, Shawnee and Wyandotte.

For domestic violence victims in Kansas, the KBI reported that 16,453 were female and 7,017 were male. The most common victim was a boyfriend or girlfriend or ex-boyfriend or ex-girlfriend, followed by a spouse and then a parent.

Nearly three-quarters of domestic violence offenders in Kansas last year were men, the KBI reported. The highest proportion of incidents in Kansas, at 17%, occurred on Sundays.

In 2021, there were 32 homicides in Kansas — 27 of women — attributed to domestic violence, including seven in Sedgwick County, according to the KBI. Nearly two dozen of those murders were committed with a firearm, but four involved a knife and three involved personal means, such as strangulation.