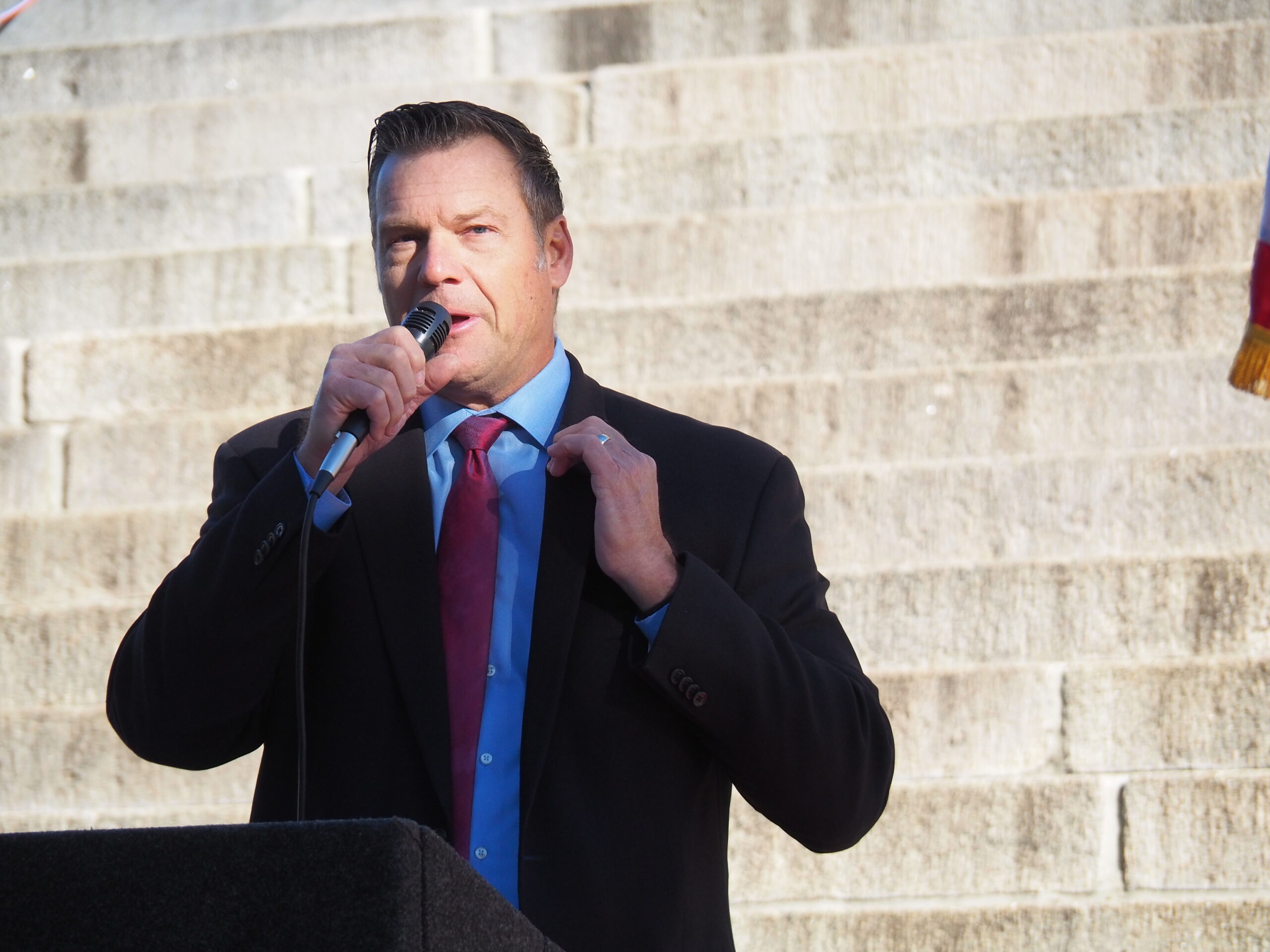 The Kobach campaign refused to take responsibility for the gaffe, but in 2017 the commercial was redesigned to remove the image of Woods being held by two officers.

Mann’s career as a Lawrence police officer was ended when a drunk driver hit him at 50 mph during a routine traffic stop. He later worked as a prosecutor.

“Just when I thought nothing could shock me, Kris. Kobach he’s lying about me and Tiger Woods in the same false ad,” Mann said. “I believe we should keep guns out of the hands of children and violent criminals. Chris Kobach? He shouldn’t be talking about gun safety. He is so careless that he left his guns in his car right here in Kansas and allowed criminals to steal deadly weapons.

Mann, who did not seek elected office before filing for attorney general, opposes the death penalty but said he would follow state law in capital cases.

Kelli Kee, a spokeswoman for Mann’s campaign, said Kobach’s ad portraying Woods as someone under arrest for murder was “absolutely false and misleading.” She said Kobach “wasn’t ashamed of the lies he would tell to gain political power.”

Kobach, of Lecompton, did not respond to a request for comment on the ramifications of the advertising misconduct. He was twice elected Secretary of State and lost subsequent races for governor in 2018 and for the US Senate in 2020.

Johnson, the GOP candidate in the campaign to unseat Democratic state Treasurer Lynn Rogers, posted an ad on social media that condemned the passage of a state sales tax increase in 2015. The ad was pulled by Johnson because he voted for the proposal when he was a member of the Kansas House. Rogers did not vote for the legislation because he was not elected to the Kansas Senate until 2016.

A second version of Johnson’s tax attack on Rogers also failed. In a revised edition of the ad, Johnson criticized Rogers for supporting the 2017 tax bill. However, the legislative record showed that both Johnson and Rogers voted for it. The bill in question repealed a controversial, budget-busting tax policy “experiment” signed by Gov. Sam Brownback in 2012 and 2013.

“I think Steven forgot to check his own record when he lied about mine,” said Rogers, of Wichita. “He majestically broke the trust of voters by running these ads, sending extremist spokespeople out and not even remembering his record.”

In campaign appearances, Johnson and Rogers emphasized the reasons why Kansas voters should trust them to handle the state’s finances with honesty and integrity.

Rogers said a pattern had developed in which political strategists employed by Johnson and Kobach turned to “subliminal tactics to ensure victory for extremists who do not represent what voters want.”

Johnson, an Assaria farmer who has served in the House since 2011, did not respond to a request for details on how his campaign twice misrepresented votes on state tax policy. His campaign manager, Rob Fillion, defended the revamped ad in a statement to The Kansas City Star.

Republican state Sen. Caryn Tyson, who narrowly lost the August primary to Johnson, objected to the Johnson ad during their race. Johnson claimed to be “tax tourism Caryn Tyson”. She said it is patently false that she was the architect of the 2015 sales tax reform bill referenced in the first version of Johnson’s recent attack on Rogers.

Vicki Hiatt, chairwoman of the Kansas Democratic Party, said Johnson’s willingness to move quickly and lose with the facts helped him in the primary against Tyson. Hiatt said Kansans should know that Johnson is relying on “the same dirty tricks” in the Nov. 8 general election.

“If Steven Johnson can’t be trusted to truthfully present the facts, how can Kansans trust him on state finances?” Hiatt said.

The maneuvering by the Johnson and Kobach campaigns followed revelations that GOP gubernatorial candidate Derek Schmidt’s bid to make false allegations that Gov. Laura Kelly’s administration had funded a drag show in Wichita.

Schmidt, who acts as a prosecutor, compared the show to an attempt to sexualize children. Kelly campaign spokeswoman Lauren Fitzgerald said “Schmidt should be embarrassed” for not presenting evidence to support his attack.

Patrick Miller, a professor at the University of Kansas, said most voters make up their minds about candidates early in the election season. Candidates tend to release October surprises in an effort to appeal to undecided voters who have so far been content to ignore campaigns, politicians and issues, he said.

“THi often will get Attention and hopefully break over on that person WHO Yippee only randomly or at least paying watch out,” Miller said.

Wichita State University’s Alexandra Middlewood said recent attacks like Schmidt’s jump could be used to bolster a candidate’s or party’s base rather than influence voters who are still on the fence.

“IIt is really O convincing his own base on show up and vote for Republicans,” she said.

Emporia State University professor Michael Smith said Schmidt’s gambit could be another effort to encourage Kansas conservatives to turn away from state Sen. Dennis Pyle of Hiawatha. Pyle is an independent gubernatorial candidate who could make an impact in a close race between Schmidt and Kelly even if his share of the vote falls short of single digits, he said.