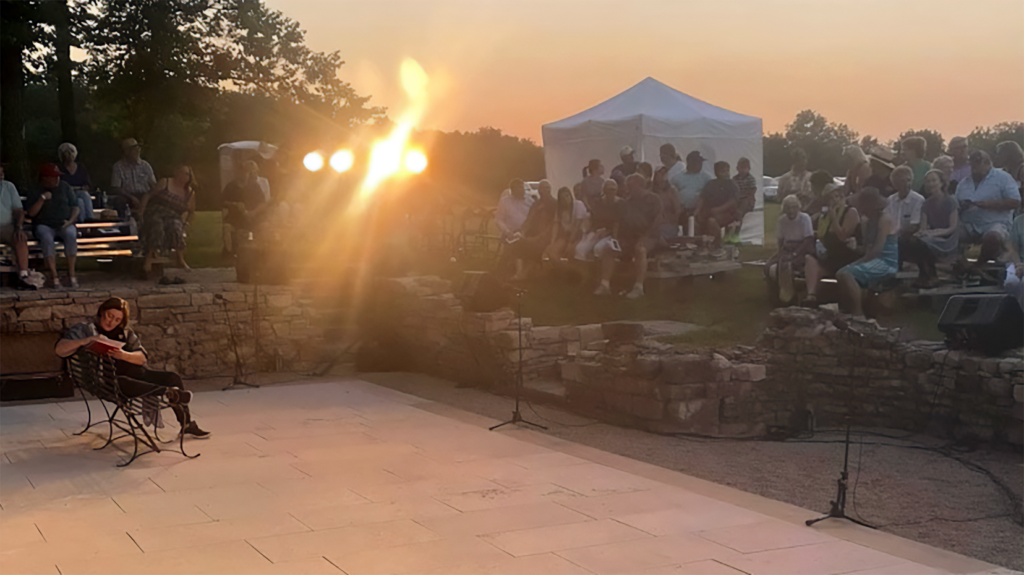 The Kansas Reflector welcomes articles from writers who share our goal of broadening the conversation about how public policies affect the daily lives of people across our state. Jenny Towns is an artist, educator and communications professional. She is the school choir director and is pursuing a master’s degree in music education at Kansas State University.

Earlier this year, Beth Wynstra and Mary Pinard—professors at Babson College in Boston—were invited to write and direct a play at The Volland Store in Alma.

“Heart/Roots: Wabaunsee County” premiered in June 2022, the first performance of its kind in The Volland Store’s renovated outdoor “Theatre at the Ruin” space on the Store grounds.

Last year, Wynstra and Pinard collected stories from Wabaunsee County residents representing a cross-section of the county across time, region and environment. This was the source material for “Heart/Roots: Wabaunsee County”. The play was structured as a series of monologues and scenes that told the story of The Volland Store, the surrounding community and the people who lived there. This was done exclusively by residents of the Flint Hills and surrounding areas.

I was one of those actors.

As summer turned to fall, I stayed in touch with the team of artists I met and worked with at Volland, and often thought of my new friends Beth and Mary, now back home in Boston. This work undoubtedly meant a lot to all of us here in Kansas, but I wondered how Beth and Mary reflected on the experience.

What did they learn about the Sunflower State and its people when they created this artwork with us? How does theater work to tell stories—both universal and specific—that reveal fundamental truths about place?

I talked to both of them about it.

As summer turned to fall, I stayed in touch with the team of artists I met and worked with at Volland, and often thought of my new friends Beth and Mary, now back home in Boston. This work undoubtedly meant a lot to all of us here in Kansas, but I wondered how Beth and Mary reflected on the experience.

“Theater is collaborative and dynamic at its core: the perfect coordinates for bringing the stories of a county like Wabaunsee to life,” said Mary Pinard. “It allows for a variety of stories – and ways of telling (monologue, dialogue, scene, sonnet) – and transforms and preserves the theatrical spectacle through its use of elements.

“Having this production take place in the restored ruins of the original family home of Otto and Mabel Kratzer, key progenitors of The Volland Store and the importance of community and art in the area, emphasizes that the theater continues to be cultural, historic and aesthetic. source.”

Beth Wynstra reflected on the personal nature of the stories told in the piece.

“Both in rehearsal with the cast and during production with our audience, we were surprised at how the stories we told resonated with so many individuals,” she said. “A script that is utterly specific and beautifully universal, and a production in which living bodies recited, re-enacted and traced the history and beauty of Wabaunsee County, offered an artistic experience where we believe many people found a base. connection.”

As an actor on that outdoor stage in the sweltering June heat (a particularly hot June, we learned) I can attest that the elements were not always on our side.

Beth commented, “I think what surprised me the most was the steadfastness of the cast and crew. Nothing (heat, bugs, three trains on closing night) could shake them.”

Mary described what struck her most about the Kansans she met and worked with: “Wisdom, steadfastness, generosity, attentiveness, resilience, frugality, storytelling ability.”

Although it was very, very hot.

The Volland store itself is a magnet for artists – drawn from near and far – to create, display, engage and perform. While Mary had already spent a lot of time there as a poet, Beth was working at Volland for the first time.

“While I’ve visited The Volland Store many times over the past few years and been a poet in residence several times, I found the experience to write a play about it and the surrounding community – and see it come to life. under the extraordinary leadership of Beth – to be dynamic in new ways,” said Mary.

“Performing the play in the ruins and on the grounds of the shop made a crucial connection between the two spaces, but also introduced the possibilities it has for future productions, theatrical and otherwise,” she said.

“For example, while planning a possible rain location for our June production, Beth and I realized that the store could serve as a black box theater space with all kinds of flexibility and experimentation. I am quite sure that as its reputation for quality productions of small theater projects grows, The Volland Store (and its 21stHoly– century owners Patty and Jerry Reece) will continue to thrive as the heart of a vital and engaged community.”