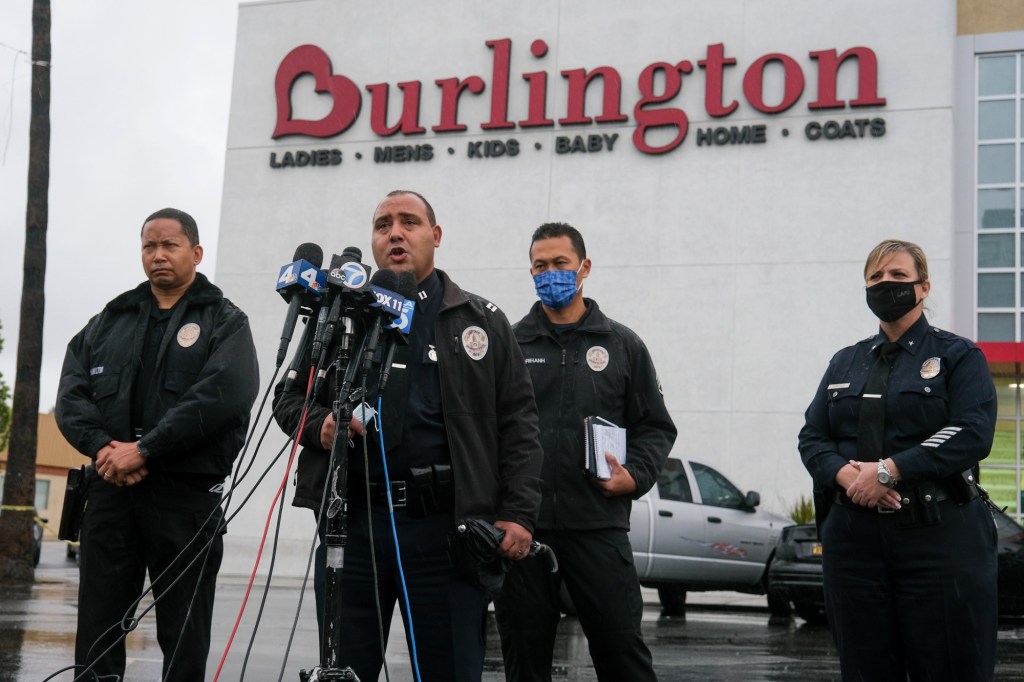 A Los Angeles Police Department officer with a rifle who fatally shot a man and a 14-year-old girl at a North Hollywood clothing store last year violated department policy Tuesday with at least some of the rounds he fired.

The Los Angeles Police Commission has found Officer William Dorsey Jones’ first shot at Daniel Elena Lopez, who was standing at the opposite end of the clothing aisle at Burlington Coat Factory on Victory Boulevard in December 2021 after striking a woman with a bicycle lock, was covered by LAPD rules for officers using deadly force.

However, the second and third shots he fired were not in accordance with LAPD policy, the Commission found. In his own ruling, LAPD Chief Michel Moore found that all of Jones’ shots were out of policy.

With those three shots, Jones killed Elena Lopez and Valentina Orellana-Peralta, a high school freshman who was hiding in a booth in the store’s dressing room just behind where Elena Lopez was standing. At least one of the bullets pierced the walls of the dressing room and hit a girl who was clinging to her mother.

Moore wrote about his decision in a lengthy memo released Tuesday. The chief sits with another commission, the LAPD’s Use of Force Review Board, while ruling on shooting cases and ruling on all rounds fired in any incident. He said Jones should have known that his firing the rifle was not a reasonable use of force under LAPD policies.

Moore and the majority of the Use of Force Review Committee found that “Officer Jones inaccurately estimated the imminent threat of death or serious injury posed by Elena Lopez” when he fired all three rounds in an instant.

They said Jones should have reconsidered what Elena Lopez was doing after the first shot. Instead, he fired all the rounds in sequence and then checked.

Moore also said Jones, who told LAPD detectives he believed the incident involved an active shooter, should have been able to determine once he got to the scene that he was not involved in the shooting.

“(The Minority of the Use of Force Review Committee members) believed that starting with his arrival on the scene, Officer Jones failed to assess that this incident was not an active shooter scenario,” Moore wrote, explaining why he sided with the minority. record about Jones’ first shot.

Both the chief’s and the commission’s decisions mean Jones could now face discipline or dismissal. However, he can also appeal any decision to the Department’s Rights Board, which will make the final decision. It was not immediately known Tuesday when any potential discipline would be imposed and publicly announced.

An attorney for Jones did not respond to a request for comment Tuesday. Lawyers for Orellana-Peralta’s parents, who sued Jones and the LAPD, were reviewing the commission’s and Moore’s decisions.

LAPD officials also did not respond to a request for comment Tuesday.

The killing of Orellana-Peralta led to protests, a lawsuit and an investigation into what all the officers who arrived at the clothing store did that day before the shooting. When they got there, officers found the clothing store in chaos, with Elena Lopez still upstairs on the second floor using a bike lock to whip customers and smash display cases.

Jones was one of the last officers to arrive at the clothing store that day. By the time he parked his cruiser outside and grabbed his rifle, a team of officers was on the second floor of the building calling for shoppers to come and look for Lopez.

Within seconds of Jones reaching the second floor, all the officers began moving forward. They heard the woman screaming for help: Lopez was standing over her in the alley, whipping her with a bicycle lock. Jones pressed forward, as did an officer with a less lethal 40mm foam baton launcher.

Jones and the officer with the launcher turned into the alley to find Elena Lopez now standing at the opposite end. The woman he had beaten was still on the floor, bleeding around the face. Jones aimed the rifle and Elena Lopez began to duck out of the way; Jones fired three times, hitting Elena Lopez once.

Orellana-Peralta’s parents filed a lawsuit against the LAPD and Jones in LA County Superior Court earlier this year. A hearing in that case was scheduled for December 2023, according to court records. It’s unclear why the case would be delayed so long.