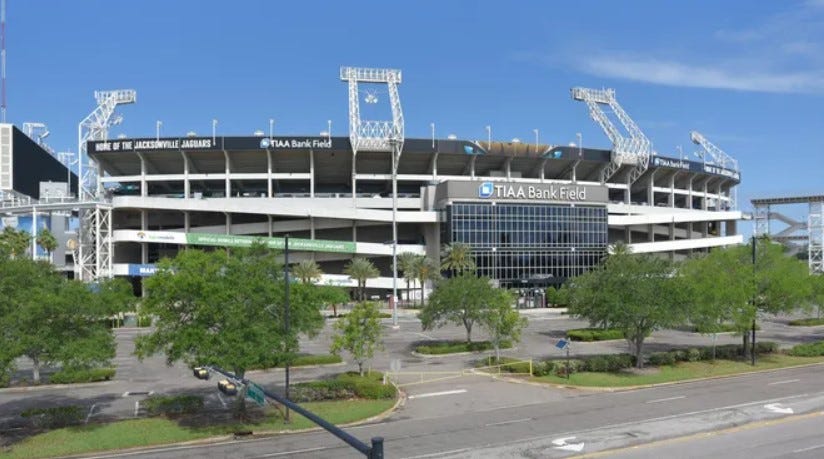 An electronic anti-Semitic message appeared at TIAA Bank Field at the end of Saturday’s Georgia-Florida game, according to a video shared by a television reporter.

The hateful message came as similar messages appeared on signs elsewhere in Jacksonville on Friday and Saturday.

The message “Kanye was right about the Jews” was projected on the TIAA Bank Field video board. The reference was to Ye, the artist formerly known as Kanye West, who posted hate speech attacking Jews on social media earlier in the week.

Other hate messages reported in Jacksonville included banners posted on the Interstate 10 overpass on Jacksonville’s Westside and on the Arlington Expressway, and a message projected on the outside of a downtown building. A similar report was reported a week ago on the Los Angeles Freeway.

More: 16 white supremacists, including some from Jacksonville, plead guilty to violent extortion

The Jewish Federation and Foundation of Northeast Florida condemned the “anti-Semitic rhetoric and message of Jew hatred here in our city.”

Jennifer Plotkin, president of the board, and Mariam Feist, executive director, expressed outrage in a statement Sunday morning.

The federation “is in communication with the FBI, the Jacksonville Sheriff’s Office and the St. Johns Sheriff’s Office. We will continue to work with them to ensure the safety and security of our community,” they said.

The organization, they said, is “using our outrage to reach out to our community” and initiated the “Jewish Community Relations Council (JCRC) to build alliances and relationships with our elected officials, religious leaders and public school superintendents to educate, to inform and ensure that our Jewish community has a strong voice in the fight against intentional (and unintentional) anti-Semitism.”

Elected officials, political candidates and leaders from both parties and others also condemned the reports in separate statements late Saturday and Sunday.

The University of Florida and the University of Georgia issued a joint statement strongly condemning the reports at TIAA Bank Field and in Jacksonville, saying in part that they “condemn these and all acts of anti-Semitism and other forms of hatred and intolerance.”

Before the Florida-Georgia game, there was a report of hateful messages on posters on Chaffee and I-10 on Friday and Saturday. One poster read “END JEWISH SUPREMACY IN AMERICA” and the other read, “YOU KNOW ITS JEWS.”

Later, there was a report of a hateful message on a poster on the Arlington Expressway that mirrored what was projected at TIAA Bank Field.

And the message was reportedly projected onto a building in downtown Jacksonville on Saturday night.

U.S. Rep. John Rutherford, a former Jacksonville sheriff, issued a statement condemning the reports, saying in part that the reports were “despicable and extremely disappointing. There is absolutely no place for this kind of hate in Northeast Florida.”

“Jacksonville is a city that is better because of its diversity. Those who spread messages of hate, racism and antisemitism will not be able to change the heart of this city or its people. I condemn these cowards and their cowardly message,” Curry tweeted.

Jacksonville Jaguars owner Shad Khan condemned anti-Semitism before the start of a football game against the Denver Broncos in London, and the team later released his statement.

“…I know it’s not representative of our community, but it happened and it’s outrageous. It’s hurtful and wrong. It has to stop…,” said Khan, who asked that everyone “do their part mission to end ignorance and hatred.”

TIAA and TIAA Bank officials also condemned the messages shown at the stadium and elsewhere in the city.

“We are appalled and condemn the hate speech committed at TIAA Bank Field last night and the other acts of anti-Semitism that have been so visible recently. TIAA stands with the Jewish community and is committed to inclusion and tolerance,” Michael Cosgrove, the company’s vice president of corporate communications, said in a statement. in a statement on Sunday.

It is unknown who is responsible for the messages and banners and how they were projected at TIAA Bank Field.

The Times-Union reached out to the sheriff’s office to ask if it was reviewing the reports, but did not receive an immediate response.

This is a developing story, check back to Jacksonville.com for updated information as it becomes available.