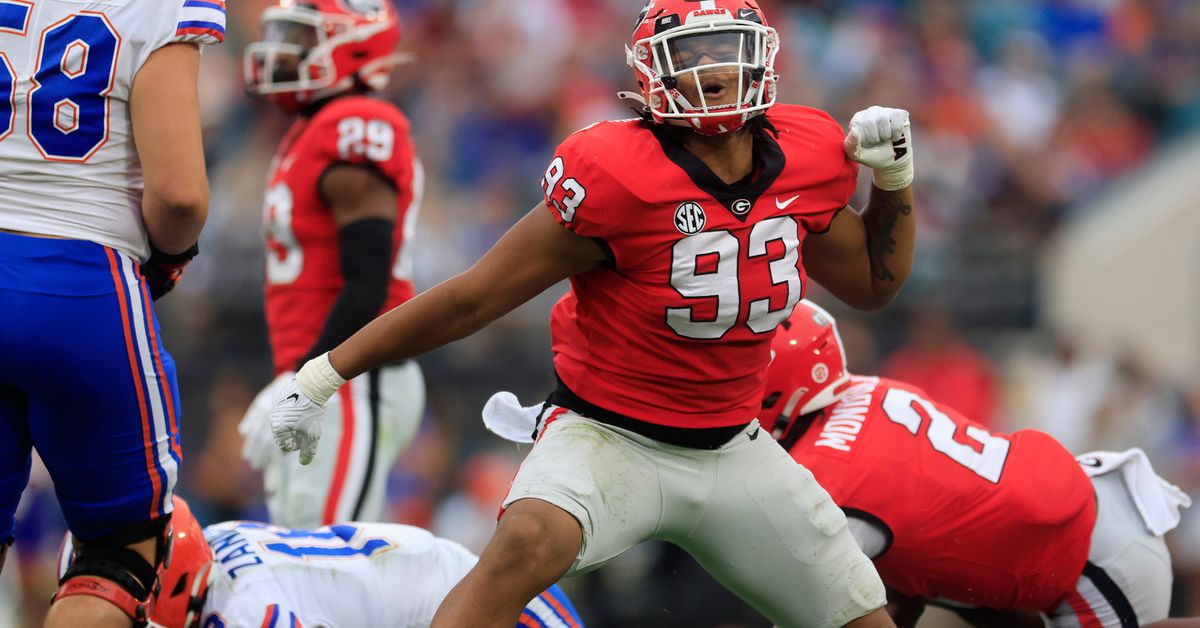 We took care of business against our most hated rival, but not without some hiccups. A red-hot Tennessee team will arrive in Athens in a few days. We’d better tighten up.

1. I don’t know exactly what happened in the 3rd quarter, but I’d like to think it was just a lack of focus and youth.

I don’t know if Billy Napier passed on any motivational words of wisdom at half-time yesterday, but we certainly weren’t focused. A bunch of Florida fans have already decided to head back to the swamps of Alachua. All I know is that there were a lot of empty seats in the stadium for the visitors and that should have been motivation for our boys. Football, more than plate tectonics, is all about momentum. Going into halftime with a 24 point lead was pretty safe.

2. Florida was 4th down and 4th at midfield. The referee blows the whistle very late, but Bear Alexander can’t react to his bull-rush in time to trip Anthony Richardson and draw a 15-yard penalty, which gives Florida a lifeline and ends up scoring. We immediately fumble on our next possession (result: Florida field goal) and then Stetson throws a horrible pick. We ran the ball right down their gullet, but at that point we decided to pass. Anyway, they hit a long touchdown when Malaki Starks doesn’t catch a route, and suddenly it’s a ball game. If this happened before Kirby’s regime, I can see us falling apart and losing. We’ve all seen this scenario on more than one occasion. Times are different, folks. We have regained the serenity that Kirby preaches daily. Once we recommitted to running, the bleeding stopped.

2a. If we stop Florida on that 4th down at midfield, we have a short field, the Gators are hot on their heels and I could see us beating them by a score in the 50’s. Still, we scored 42 and that was more than enough.

3. As Macondawg said, “It was the type of football we’ve seen at frustrating intervals this season from a Bulldog team that both (Stetson Bennett, Kenny McIntosh) and neither (Bear Alexander, Malachi Starks) should know better.” he can’t repeat it. I believe we can fix it. I trust the coaching staff when they gather the “guilty parties” in the film room this week and come to meet Jesus for a few things.

4. Stetson Bennett didn’t play particularly well in this spot, but he was good enough when it mattered. And we dropped at least 3 very catchable balls that should lead to big profits. Stetson put the balls in place in these cases. On 4th and 7 at the Florida 33, the Gators jumped the sideline (Thanks, Brenton Cox. Please tell me you have seven years of eligibility left) and threw a perfect pass to Brock Bowers for Florida’s first down. 4. No one can cover #19 one on one. A few plays later we score and there’s your ball game.

5. Daijun Edwards keeps getting better and better and rarely loses yardage. Had his best day as a Dawg, racking up 106 yards on 12 carries in an impressive 8.8 ypc and a brilliant 22-yard score that halted Gator momentum and effectively iced the game. Did we ever throw him the ball? I’d like to see him on the bike and find out.

Daijun Edwards, ladies and gentlemen. This was a big moment.

6. All of our runners did well, the only disaster being a fumble by Kenny McIntosh. How awesome is it to have Branson Robinson off the bench late in the game to crush an already tired defense? Kenny Mac finished with 90 yards and 2 scores on the day; Robinson with 35 on 9 carries. The Dawgs piled up 239 yards on the ground and we will have to put up a similar effort next week.

7. There’s a lot to unpack in the video clip below:

8. Brock Bowers first catch of the day was some vintage stuff from this guy. It was a great throw from Stetson and just highlights how incredibly soft Bowers’ hands are. The 73-yard touchdown pass that ended up being one of the best moments of the day is already legendary.

9. I really, really hope we see the return of AD Mitchell next week. Even if he does, I don’t know how effective the sack will be going back to the very first play of the Samford game. He was dressed yesterday but didn’t show up. I’ve seen Arian Smith in a few games as well, but as far as I know he hasn’t been targeted at all. This offense, when they aren’t forcing bad throws or fumbles, can score on anyone. There is a really good chance that it will be a shootout on Saturday.

10. Jalen Carter is a difference maker and, when healthy, the best player on the court. If he was still feeling some discomfort from the sprained knee he suffered against Mizzou and the ankle injury that returned to Oregon, he hid it well. I think he’s back to his old awesome self. Big #88 played on 3rd and several 4th downs to great effect and was incredibly disruptive when he was in the game.

11. As of this writing, I don’t know the extent of Nolan Smith’s shoulder injury. It looks like it was separated. That’s a big shame, because Nolan played great from the opening snap, having already recorded a tackle for a loss. Any magic that Ron Courson and his staff conjure up this week will be most appreciated. Man, I hated to see that. Darris Smith was sacked on the opening kickoff of the 2nd half and helped off the field. Amarius Mims has some kind of knee sprain and has not returned pending an MRI. Yeah, we got a little crazy yesterday. We should know more soon, but Kirby & Co. always keeps injury information a bit of a mystery.

12. I thought Robert Beal had his best game of the season yesterday. He drove hard off the rim and rushed Anthony Richardson several times. Jamon Dumas-Johnson also played a very good game. Javon Bullard had the best game of his young career, leading the team in tackles with 8, 5 solo and 1.5 tackles for loss.

12a. I am officially concerned about Kelee Ringo on the deep sideline ball. Just stay on your feet. You’re only as fast as the guy you’re covering. Stay in phase please. To his credit, he did it on the ensuing pass, which he covered well.

13. Honestly, special teams wasn’t special. We allowed Trevor Etienne, who is dangerous in this role, to get a couple of decent starts. Kearis Jackson would be wise to grab some of the kickoffs — especially after Florida gained momentum in the 3rd quarter — and let the offense start at the 25. The temptation to turn the momentum with a long kick return is great, but there’s really little chance of success when over that makes you think.

14. Beating Florida despite a few warts is always the goal. Never in my wildest dreams, after walking out of that place enough heartbreaks, would I ever dare be critical of a twenty-two point victory. I think the standard is so high now that we have that luxury. I honestly think if we come out with more focus at halftime we’ll end up with 50+ points and they can get another score. It does not matter. The goal is always to come out of WLOCP with a “W” and we accomplished that goal.

Big facts. Enjoy it while it counts. It will be a meaningless game in a few years. Will not impact national title https://t.co/MVEKDSORQd

There’s a lot to work on, and during the bye week, Kirby and his staff put some things in place in preparation for Tennessee. At the time of writing we are 10.5 point favourites. If we play to our standard, I don’t think it’s unreasonable and I think Tennessee is going to have a very hard time dealing with our tight ends while they scheme a 3-head offense. But the competition is very, very good. It could be the biggest Sanford Stadium game of all time. I’ll be there. Having said that, next week’s “15 Thoughts” will probably be a bit late as I’m traveling next Sunday.

15. I just wanted to express my thoughts and prayers to the family of Vince Dooley. I am deeply saddened by his passing and will miss him. Everyone seems to have a great Vince Dooley story these days. Many of my peers were in the Redcoat Band and got to know him a little. I met him once (a term used loosely here) a long time ago, in the early 1980s. I rang for him at the old Kroger on Broad Street, down the hill from the ABC package storm. My interaction was brief because I was a little starstruck, but I remember him being very kind and just very pleasant. It will be an emotional start to next week’s game as we honor Coach Dooley at Dooley Field at Sanford Stadium.

RIP Coach. And thanks for everything.

15a. As for Tennessee: This game is at home. They are the darlings of the media at the moment and deserve a lot of the press.

Conversely, we’ve played in a few “big games” lately, haven’t we? I trust our coaches that we are ready to play and play well. I like this tweet from an old blog friend:

This team really seems to have instilled a calmness that we need in this team. As Bama, you can beat us, but you’ll have to knock us down, then knock us down again, and then kill us dead because we’ll keep fighting. I like this look from the Dawgs.#GoDawgs

That’s all I got.