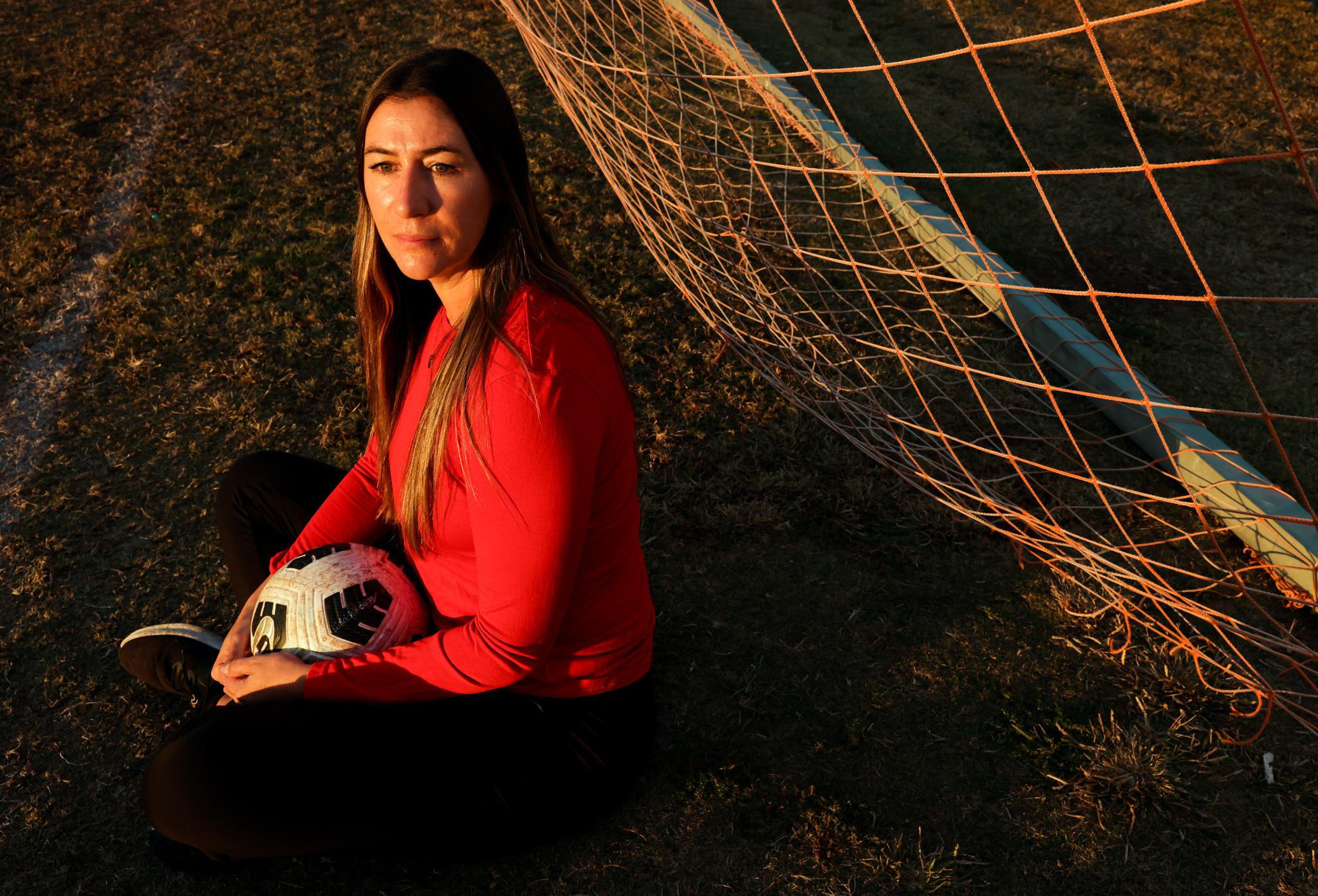 A week after being racially taunted during a girls’ regional championship game in March, Ciara Wilson barely left the house.

The soccer field has long been her refuge. Now that the prank video has gone viral, the Buchanan High School (Fresno County) senior has been missing school to emotionally recover.

“I told her to take the time she needs,” Ciara’s mother Rachel Wilson told The Chronicle. “It was so hard. The spotlight was on her.”

Since spectators began returning to sporting events last year after a 15-month pandemic-related absence, numerous incidents of fan misbehavior at all levels have made national news. Northern California high schools are no exception. With the number of episodes involving fan misconduct seemingly at an all-time high, the California Interscholastic Federation has implemented several guidelines to promote a safer game environment for student-athletes, coaches and referees.

The question is whether these changes will be enough to prevent incidents like the one experienced by Wilson and bolster a backlog of authorities. Dave Cutaia, acting secretary for the Contra Costa Football Officials Association, said fan misbehavior has been the main reason more referees have quit in recent months.

The sports world faces a mental health reckoning. This story is part of a series exploring the challenges we face at all levels of competition and how to address them.

The CCFOA had to bring in officials from other regions and use crews with four referees instead of the usual five. Even then, several Bay Area high school football games have been postponed this season due to a lack of officials.

“The numbers just aren’t there, and that’s really the case for every association in California and the U.S.,” Cutaia said. “You get paid $72 to officiate a freshman game. I don’t know many people who are going to shell out $72 and listen to someone insult or name-call them for no reason.”

More than a dozen Northern California high school referees, coaches and administrators contacted for this story said they’ve seen a deterioration in fan behavior over the past five years. In the past 12 months alone, there have been a number of reported incidents involving racist taunts, fights in the stands and parents threatening players, officials or coaches.

Cell phone videos and social media ensure that some episodes that might otherwise be overlooked are brought to the attention of the public. In May, video went viral of Buhach Colony High School (Merced County) parents confronting and fighting an umpire in the parking lot after a baseball game.

But given that the circumstances surrounding each episode differed, it can be difficult to pinpoint specific reasons for the drop in viewership.

A study by Wintergreen Research estimated the pre-pandemic value of the U.S. youth sports economy, which includes everything from private tuition to apps that organize leagues, at $19.2 billion. With parents investing more money than ever in their children’s athletic success, they sometimes forget that high school sports are supposed to be about fun and personal growth.

There is also the fact that club sporting events are less regulated than high school events. After spending so much time at amateur athletic union games, some parents may be surprised to find that tapping that was acceptable at a summer tournament can get them kicked out at their kids’ high school game.

Then there is the matter of the COVID-19 pandemic. Studies suggest that extended absences from the classroom hurt learning, and many high school coaches believe the same is true for fan behavior.

It’s not just that all that time at home made people less comfortable in social situations. According to the World Health Organization, anxiety and depression in the US increased by 25% during the pandemic. This might help explain why some fans seem more irritated.

“We know that the pandemic has caused more dramatic symptoms of emotional disorders such as anxiety and depression,” said Dr. Vernon Williams, a sports neurologist at the Cedars-Sinai Kerlan-Jobe Institute in Los Angeles. “When these things are present, people will react differently to the same kind of stressors and pressures that they were previously exposed to.” They won’t have the same kind of resilience.’

Ron Nocetti, CIF executive director, has seen incidents of fan misconduct in his more than three decades working in high school sports. But he said he’s heard of more problems with viewers recently, which he attributes to what he calls a “trickle-down effect.”

Rarely does more than a few days go by without some episode of fan misconduct in professional or college sports garnering national attention. Just in November, an LSU football fan was ejected for refusing to leave the end zone after his team upset Alabama; a fan at the same game was arrested for assaulting a police officer; Premier League side Southampton FC ejected 120 fans from their game against Everton for misbehavior, and 17 Wisconsin students were expelled from the Badgers’ soccer win over Maryland.

“If you look at college sporting events and professional sporting events, the behavior has gotten worse over time,” Nocetti said. “I think it got down to the high school level. We need to continue to reinforce with our schools that this is athletics based on education.

“If you think that inappropriate behavior in the stands will continue to be accepted by our administrators in high school sports, it simply isn’t.”

In May 2020, when high school sports were closed due to the pandemic, the CIF instituted a policy that any fan ejected from one of his high school games must also miss his team’s next game. These cushions increase the more the fan is thrown.

Public venue announcers are required to read a PSA before games that outlines penalties for fan misconduct. To reduce incidents, the CIF began distributing a “Sportsmanship Toolkit” to member schools this fall, which includes an online sportsmanship course, code of conduct forms and public notices.

Nocetti said feedback from schools indicates the adjustments have been helpful for many coaches and administrators. Although Cutaia remains dismayed by the declining number of officials, he has seen signs that fans are becoming more aware of the issue.

After several football games this season, parents and students sought him out to shake his hand and thank him for his work — an effort rarely seen before the pandemic. It helps that some school administrators have gone beyond CIF requirements to improve fan decorum.

During Fall River High’s fall sports meet in August, Sevilla told parents that anyone asked to leave a game would not be allowed to return to the school’s sporting event unless they completed an online course on fan behavior.

“A lot of people looked at me like I was crazy,” said Sevilla, who has seen many incidents of unruly fans in surrounding communities since spectators began returning to games after the pandemic. “It just set the tone.

After reading a PSA provided by the CIF at the Fall River High games last school year, Sevilla figured the message could mean more from the student-athletes. Ten drafts later, he had a three-paragraph script welcoming fans to the game, reminding them that both teams deserve support and respect, and asking the audience to “not forget that this game is for us students.”

While visiting Fall River High in late August as part of his annual tour of various CIF sections, Nocetti became emotional as he watched students read updated PSAs before a volleyball game and a football game. Today, Seville scripts are read in high schools across the state.

“I got goosebumps when I first heard the kids read it because this was one of the things that education-based athletics does for our kids,” Nocetti said. “It puts kids in leadership positions. It puts them in positions of influence. It helps athletes take responsibility for their own action.”

Still, work remains. The incident Wilson experienced at the Division I NorCal Regional girls soccer championship in March highlighted the problems in prep sports — not only with fan behavior, but also with school officials and administrators.

Buchanan High overcame ACL injuries to three starters and the COVID-19 outbreak to reach the title game. On Buchanan’s second free kick, there was a loud bark from the Oak Ridge stands when Daisy Torres — a Hispanic player — missed her shot.

With the score tied 1-1, a gorilla roar erupted from the Oak Ridge crowd as Wilson prepared to hit the ball. She was the only African-American on both teams. After making the penalty kick, Wilson — the Fresno Bee’s Co-Player of the Year who declined to be interviewed for this story — broke down in tears, her hands shaking as she tried to process what had just happened.

As her father and older brother went to the Oak Ridge stands demanding to see who was heckling, Buchanan High coach Jasara Gillette asked the referees to stop the game until the perpetrator of the taunt was removed. It wasn’t the first time someone at the predominantly white school in an affluent suburb of Sacramento had harassed student-athletes of color.

During a girls basketball game against McClatchy High School (Sacramento County) in 2016, Oak Ridge fans directed racial slurs and slurs at McClatchy’s Asian-American players. Referees are instructed to suspend action in such situations until the offending fans are removed by school administrators. If the fans cannot be removed for any reason, the officials are to stop the game and leave.

But during the NorCal Regional Division I girls soccer championship game, officials continued to call penalties after two racist taunts. Gillette knew then that her team had no chance of winning.

“Our players were completely upset,” said Gillette, whose team lost a 4-2 penalty shootout. “Penalty kicks require your full attention and they were in tears. The whole situation was absolutely ridiculous.”

Oak Ridge Principal Aaron Palm told The Chronicle that the student responsible for the heckling received “steep consequences,” but declined to disclose the punishment, citing minor privacy laws. “We understand we have to do better,” Palm wrote in an email.

In the immediate aftermath of the incident, Wilson struggled to handle all the newfound attention: interviews with local TV stations, numerous video shares, racist online comments. After staying home for a week, she returned to school and tried to overcome her trauma.

“You can tell he still has feelings about everything that happened,” Rachel Wilson said. “It’s still a little heavy on her chest.

“Life goes on, but we still live with it. We still carry it with us.”