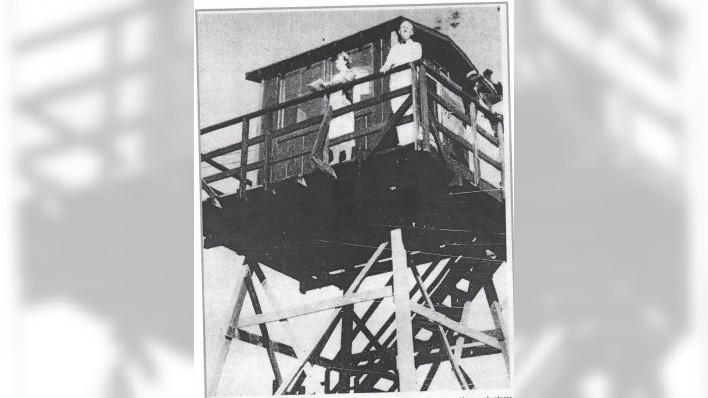 In the first few harrowing months of World War II for the U.S., Jacqueline Meredith of Riverside, then just 11 years old, knew she had to do something to help the war effort.

For that reason, she spent Saturday afternoons in 1942 and 1943 with binoculars in hand on the hillside, watching for enemy planes that might threaten the Army Air Corps’ field of march at Riverside.

In those troubled days there was great fear that a Japanese invasion of Southern California was imminent. Young Jacqueline joined the tens of thousands of Army Ground Observation Corps volunteers assigned to relieve the Army of the task of watching for enemy aircraft, reported the Pomona Progress Bulletin, September 19, 1942.

“I really thought I won the war by myself because of what I was doing,” she smiled.

Jacqueline Meredith Coulette, 93, is now a retired educator living in Pasadena, but she still remembers making those weekly observations with a classmate whose father drove them to shifts.

In over 2.5 years of continuous observation, neither Coulette nor any other observer actually saw an enemy aircraft breach our coast. What they were tracking were the tens of thousands of American aircraft flights up and down the West Coast each month.

Coulette was trained to determine the type of any aircraft that appeared, its direction of flight, speed and altitude, and then quickly call this information to offices in Riverside or Los Angeles. Each observer had to undergo special training — Coulette attended night classes at Riverside Junior College.

Day shifts were largely occupied by women and more men worked in the evening. Their observations also played a role in locating aircraft off course or searching for crashed aircraft.

Interestingly, this surveillance program was already in place in some areas before Pearl Harbor. For example, the post that had been established in November at Walnut was preparing for a training exercise scheduled for early December, reported the Progress Bulletin, November 5, 1941. The onset of war eliminated any need for a rehearsal and pushed volunteers into action immediately.

And with many military airfields in the region, there was plenty of action for observers.

And although they never saw any trace of the enemy, these volunteers had interesting experiences.

Mountain volunteers worked at a site atop a 75-foot rock well north of downtown. Ontario had a more comfortable facility built atop the Granada Theater on Euclid Avenue.

A site in Chin was quickly set up using an existing guard tower in a men’s prison. And there was no shortage of prisoners who volunteered to search for planes.

“These men in China are very enthusiastic about their work and are among our best observers,” said Ray Mills, deputy director of the San Bernardino County observer program, in March 1943.

Towers were set up in Fontana and Cucamonga on either side of the newly opened Kaiser Steel Works, whose steel output was used to build hundreds of warships. Ralph Santolucito oversaw the Cucamonga Post Office, which was across the street from his grocery store at Arrow Highway and Turner Avenue.

At Patton State Hospital in San Bernardino, staff built, financed and occupied a 36-foot-tall tower. It was a particularly busy site near the San Bernardino Air Force Base.

At Wildomar, Thomas H. Wilks, wife Theresa, and son Tom were recognized in August 1942 for nearly nine months of continuous manning of an observation post established on their farm. They have conducted 3,400 continuous hours of observation since the attack on Pearl Harbor, the August 14 Riverside Daily Press reported.

Volunteering for people who had children sometimes caused special charges. Vance and Esther Rhudy ministered at the Riverside Lookout for three hours every Sunday evening. After putting their children to bed, they went to work at a nearby station on Central Avenue across from Olivewood Cemetery.

“I was never afraid when I heard the plane,” Vance Rhudy told the Press Enterprise on May 5, 1995. “I never felt like it was going to drop a bomb on that shack.”

For Mrs. JR Oliver Jr., being both a parent and chief observer of the Bloomington station required some special strategies.

When she and her husband had to work at night, their daughters, 9 and 7, were put to bed in a teardrop trailer they took to the tower. “There were times when both girls slept soundly all the way to the post and back, not knowing they were away from family quarters,” wrote The Sun on September 18, 1943.

The new tower at Romoland was dedicated in September 1943, paid for by donations from 30 post office and community volunteers. Danish-born Anna Fox initially worked in the tower almost daily, walking 52-mile shifts a week. Transportation was later arranged for her, which made things a little easier, the Daily Press of September 21, 1943 reported.

In April 1944, the 20th and last observation post in San Bernardino County was established in Lytle Creek Canyon. The Glenn Ranch station was established in a Scotch store with Elizabeth Jackson as chief observer, the Sun wrote on April 16, 1944.

The Lytle Creek site did not operate for long, as the West Coast Program—which eventually included more than 200,000 volunteers—formally ended on June 1, 1944, after most fears of a Japanese invasion had died down. Interestingly, during the 1950s, a similar program was revived in some local towns, with volunteers manning observation posts and searching for Russian aircraft during the tense times of the Korean War and subsequent Cold War.

Observers during World War II were recognized for a large amount of service time. Bertha Patterson of Banning received a medal in August 1943 for completing 1,000 hours in her town’s tower. Coulette said she remembers receiving her “wings,” an extended service medal, but it has since been lost.

Long after her war service, Coulette continued as a teacher and school principal for many years. I am pleased to say that I was among many of her students in her eighth grade class at Alhambra.

Today, she likes to recall how her work on the watchtower grew out of a nationwide feeling that everyone needed to pull together to help us get through a dangerous time in our history.

Coulette wasn’t the only one in her family to help the cause. Her father, Bernard Meredith, attended a night class to learn to weld. After working all day for a gas company, he reported for night shifts at Kaiser steel to weld tanks for the war effort.

“It was one of those things – we were all so patriotic at the time and wanted to help where we could,” she said.

Tour of the city center

It begins in front of Holy Name of Jesus Catholic Church, 115 W. Olive Ave., and offers views of four downtown churches. Cost is $10 for members and $15 for non-members. Tickets can be purchased at the event.

The tours, held on the first Saturday of every month, last about an hour and a quarter. To register for tours, call Dave Harbin at 951-990-3395.

Joe Blackstock writes about the history of the Inland Empire. He can be reached at [email protected] or on Twitter @JoeBlackstock. Check out some of our past columns on Inland Empire Stories on Facebook at www.facebook.com/IEHistory