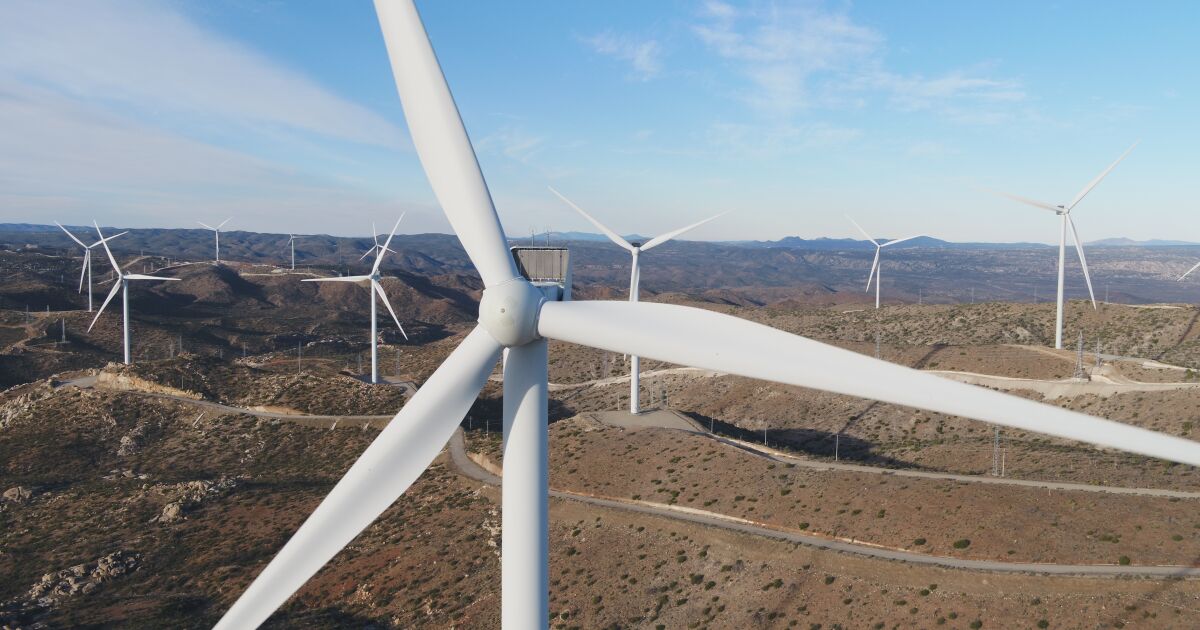 Sempra, a Fortune 500 energy giant based in San Diego, plans to build another large wind farm in Baja California and has already signed a long-term contract with a utility in Silicon Valley to take power generated by the project’s 60 turbines.

The project has yet to break ground, but if it were to move forward, Sempra Infrastructure expects Cimarrón to begin commercial operations by the end of 2024. Construction is estimated to create about 2,000 direct and indirect jobs in Mexico.

Financial details of the transaction were not disclosed, with Sempra officials saying the data is proprietary.

Electricity generated by Cimarrón’s turbines would flow from Tecate to the ECO substation in San Diego’s East County and then to the California electric grid.

The setup is similar to an already existing 260-megawatt wind farm called Energía Sierra Juárez, operated by Sempra Infrastructure, which is about six miles from where the Cimarrón facility is planned. About 47 turbines make up Phase 1 of the Energía Sierra Juárez project, and Phase 2 consists of 26 turbines that drive the rotating blades on each tower.

Sempra Infrastructure also operates a third wind facility, called the Ventika Wind Farm in the state of Nueva Léon. With 84 turbines and an installed capacity of about 225 megawatts, Ventika is one of the largest wind farms in Latin America.

The company also has plans to install up to 500 megawatts of battery storage called Volta de Mexicali, which would be built in Mexico and serve the Imperial Valley through an interconnection at the East County substation.

Sempra, the parent company of Southern California Gas and San Diego Gas & Electric, has a long history of involvement in energy projects in Mexico.

Sempra Infrastructure operates the Energía Costa Azul facility in Ensenada, which serves as an import destination for liquefied natural gas, or LNG. The company is building an export component to the plant to take advantage of the growing global market for LNG.

In addition, the company is working with the Mexican government to build another LNG export facility in the port city of Topolobampo on the Gulf of California.

Export terminals in or near the Pacific are considered valuable because ships carrying LNG cargoes to gas-hungry markets in Asia can skip paying the Panama Canal tolls that Gulf Coast facilities have to pay and can reach their destinations in about in half the time. .

In the US, Sempra Infrastructure is the majority owner of the US$10 billion Cameron LNG facility on the Gulf Coast of Louisiana, which opened for full commercial operation in August 2020, and plans to build an even larger LNG export project in Port Arthur, Texas.

Many environmental groups oppose LNG exports because natural gas is a fossil fuel and methane can leak from pipelines, wells and other infrastructure.