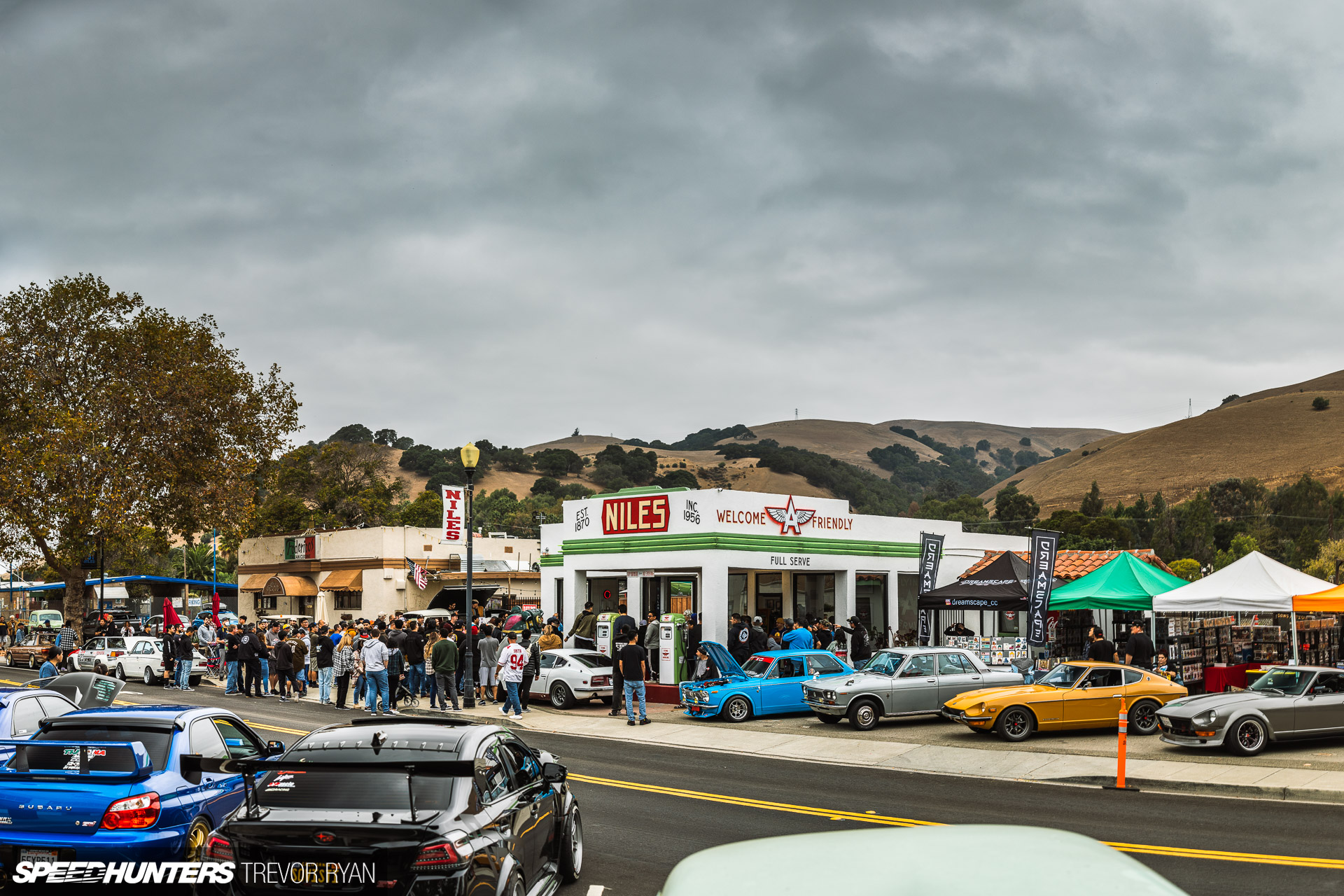 My breath hung in the cool air as I pulled out my camera and headed for the hot caffeine. The green neon lights lining the roofline of the recently renovated Niles Flying A service station glowed brighter than the overcast sky.

The familiar sound of our favorite quads – and a few sixes here and there – cut through the fresh morning silence. Excited murmurs spread through the growing crowd each time another car passed; cars that now filled the overflow section along the road. By the time the sun began to rise over the rolling hills beyond, Niles Boulevard in Fremont, California was already lined with old-school Japanese cars.

Rick’s meeting was going well and it was barely 7:00.

My camera was pushed beyond its limits at dawn and I couldn’t believe how many people managed to get a good spot for a Cars & Coffee style meeting before the sun. I’m not sure what the exact recipe is for a good event, but Riko’s Meeting had the key ingredients nailed down.

The location was well thought out, the Niles Flying A was a fantastic hub for the natural ebb and flow of enthusiasts walking around, grabbing coffee or donuts and catching up with friends. Riko rented the space for the morning, which is nestled in Fremont’s historic Niles district. Old buildings and houses line the wide sidewalks across the street, and a couple of vintage American cars parked in the back complete the aesthetic.

Generally, this area is flooded with American muscle, but not today. The semi-controlled participation consisted of only Japanese cars, mostly those built before 2000 (as advertised in pre-event flyers circulating social media). Riko teamed up with Roger Hernandez, who hosts the weekly import-focused Cars & Coffee meetups in nearby Hayward, to help promote the event and ensure a solid turnout of vintage Japanese metal.

A few nice late models also snuck in, as did the Volkswagen Karmann Ghia. And a food truck that had delicious tacos and breakfast burritos, although I unfortunately didn’t try it until later in the day.

There was also one other Volkswagen on site, a pop-up boba teahouse from the bus that was located in front of the Flying A.

Rik’s AE86 was parked front and center nearby, with its signature gold finish and 3S-GE powered ITB behind Levin’s nose. The car has already been featured on Speedhunters – as have its matching 993 RWB and IMSA-style 240Z – so I won’t spend much time on it other than a few photos to remind you how wild this SEMA Show build is.

With SEMA right around the corner again, it’s great to see that many of these cars actually live outside of the Las Vegas Convention Center.

While the venue, cars, drinks and food were great, the people are the glue that holds such a likable show together. Since this was a local gathering (just a few miles from my front door, actually), many familiar faces filled the sidewalks at the east end of Niles Blvd.

But you know how these events are. It doesn’t matter if you know someone or not; you can go right up and start asking them about their wheels, suspension, seats, who rebuilt their carburetors, where they got that Honda sweatshirt, or whatever.

Although things have restarted here in the US for a good year now, I feel like I’m still recovering from over a year of stagnant events and gatherings due to Covid. I’ve been to a number of Cars & Coffee meetups since things got back to normal, but somehow Rick’s meetup was extra refreshing.

There was a little bit of everything to see. From completely stock examples to ultra modified; of kei off-road machinery cars; from carbureted inline-fours to twin-turbocharged V8s. It’s amazing how much variation can be found within a single chassis, not to mention the many different models from different brands that made it to Rick’s meet.

Before things calmed down and everyone got down to the rest of the weekend, Riko held a raffle full of small items from Japan, including car magazines. Initial D manga set – which I really wanted to win – and, among other things, an authentic Japanese nudie mag. Best of all, the tickets were free; you just had to show up.

The raffle – and indeed the entire show – was Rick’s way of giving back to the community and the growing base of JDM enthusiasts. Riko explained that while many others his age moved on to Lamborghinis or Ferraris, he stayed true to what he always loved: old-school Japanese cars.

While I would consider the meeting a resounding success, it’s clear that Riko wants more. He points to events like Pebble Beach or the recently created Velocity Invitational — held the same weekend — and notes that there isn’t really a Japan-focused equivalent in the US.

JCCS in SoCal or brand-specific events like ZCON or NSXPO are the closest you can think of, but they certainly don’t have the prestige or precedence of a show like Pebble or The Quail. The Japan Automotive Invitational – a Pebble Beach sub-event – ​​is a good step in the right direction and a sign that Japanese cars are finally being appreciated for the gems that they are.

But for Rik, the sky’s the limit and he wants to play a part in moving the scene forward in the US. So here it is, flying its flag for Japanese car culture. What will be next? Only time will tell.

Before heading home I pulled out the ‘3D’ movie camera I picked up from my good friend John Cirone back in the Covid days and tried it out for the first time. I might get scolded for uploading such large files (give them a moment to load), but enjoy.

I’ll be back soon to shine a light on a few of my favorite cars from Rick’s meet. Thanks to everyone who showed up and made the event what it was.

Getting 3D with it