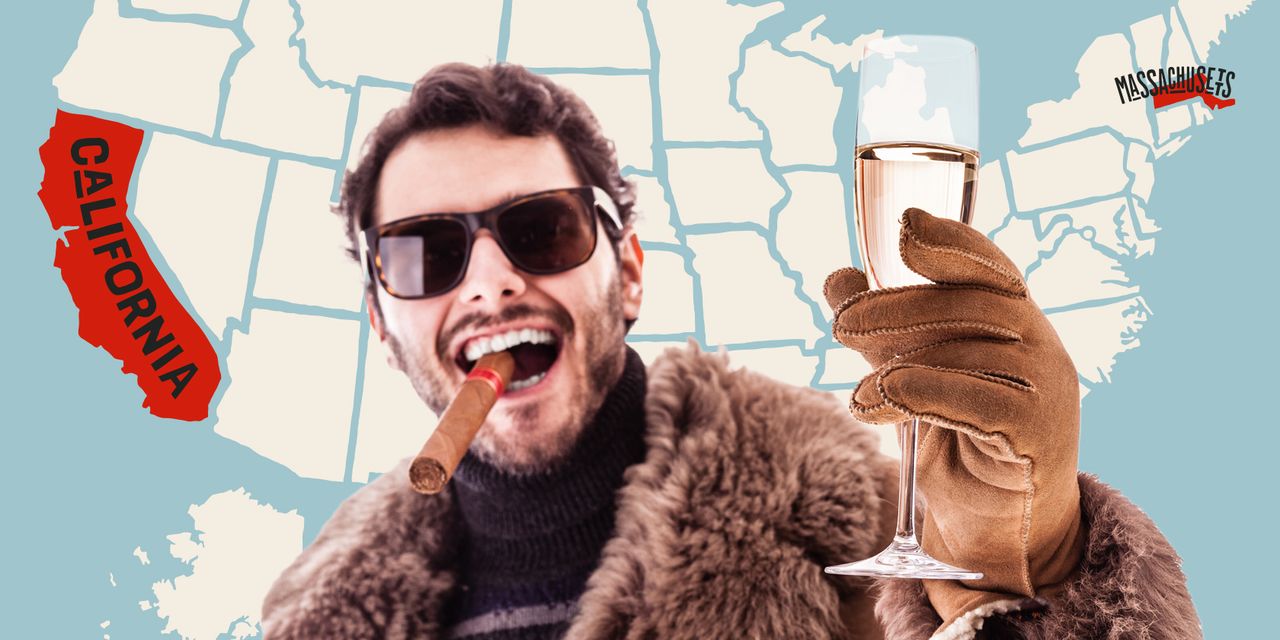 In the run-up to the midterm elections, when costs are top of mind for many, voters in Massachusetts and California are being asked to decide whether their states’ millionaires should be taxed more to help pay for sweeping public goals like improved infrastructure and the widespread purchase of electric cars.

A “yes” vote on Massachusetts Question 1 would add a 4 percent surcharge on households making at least $1 million. The Bay State has long had a flat income tax, now at 5%. The money would be tied to spending on education and infrastructure.

A “yes” vote on California’s Proposition 30 imposes a 1.75% surcharge on income over $2 million. The state already has a top rate of 13.3%, the steepest rate for the state’s income tax law. Revenue from the 20-year tax would go toward incentives for consumers and businesses to purchase zero-emission vehicles. It would also bring in more money for charging stations and forest fire prevention.

California polls show race is tightening. While one poll from early October showed 49% of voters supporting Proposition 30 compared to 37% in opposition, a more recent poll showed more than half (52%) of people were likely to vote against the measure with 41% in favor.

“A “yes” vote on Massachusetts Question 1 would add a 4 percent surcharge on households making at least $1 million.“

Does this mean a tax increase for the wealthy from two reliably democratic states? Not so fast, observers say. Polls suggest Democrats may play defense against many Republican candidates in the election. Furthermore, predicting the outcome of tax-related ballot measures is a tricky business.

Such a vote is not easy to predict. “Income tax changes have been 50/50 in years past,” said Jared Walczak, vice president of state projects for the right-wing Tax Foundation. “Voting results often surprise outside observers.”

But Michael Mazerov, a senior fellow at the left-leaning Center on Budget and Policy Priorities, warns people not to apply what happened in Illinois, California and Massachusetts in 2022. “What that tells us is that all politics is local ,” he said.

When Arizona voters narrowly elected Joe Biden as President of the United States over Donald Trump during the 2020 election, they also voted for an additional 3.5% tax on Arizonans earning at least $250,000 a year and married couples earning $500,000 — and they did so by a larger margin than the presidential vote. This additional tax revenue would have gone toward teacher pay raises, but the provision has not withstood a legal challenge.

“A “yes” vote on California’s Proposition 30 would have imposed a 1.75% surcharge on income over $2 million. “

Still, Mazerov noted, “When it comes to raising state taxes and spending priorities and so on, those things are largely driven by local needs and perceptions.” The argument that higher taxes are forcing people and businesses to flee “is really grossly exaggerated by people, who are against raising taxes,” he added. “It’s really a very marginal phenomenon.”

There are a number of other current tax-related state ballots. In Arizona, for example, Proposition 132 would make it more difficult to pass a tax bill because it would need a 60% vote.

But after the Biden administration and congressional Democrats unsuccessfully pushed for several ways to levy higher taxes on high-income earners, votes in California and Massachusetts are firmly focused on the issue of higher taxes for the wealthy.

Another reason is local politics, especially when it comes to voters who decide tax issues. Not all state finances are in the same boat: Some state budgets are in line with revenues, while 21 states have cut state income tax rates since last year, Walczak noted.

California recently voted to ban the sale of new gas cars in 2035 and is already home to the state’s highest income tax for top earners.

So the battle lines of Proposition 30 may offer some surprising twists. Lyft LYFT,

is a major backer who poured millions into the campaign to pass the measure, state records show. Other recommendations come from the California Democratic Party, a number of environmental groups, the American Lung Association, organized labor and others.

Opponents of Proposition 30 include the California Teachers Association, made up of chambers of commerce, the California Republican Party and California Gov. Gavin Newsom — a prominent Democrat who recently proposed a windfall tax on oil companies. California drivers typically pay the highest gas prices in the nation.

Newsom and opponents say the ballot measure — which would help funnel money into the electric vehicle market — paves the way for Lyft and other ride-hailing companies to electrify their fleets using taxpayer money.

““I don’t know why we’re doing a big tax increase in California when we have record surpluses.”“

miles must be driven from an EV. The companies have pledged to use zero-emission vehicles entirely by then.

In one ad, Newsom said that Proposition 30 was “advertised as a climate initiative, but was actually designed by a single corporation to divert state income taxes to benefit their company.” In an interview with CNBC last month, Newsom said it was a “terrible initiative” with “terrible timing.”

“I don’t know why we’re doing a big tax increase in California when we have record surpluses,” Newsom said, noting that he recently signed legislation that dedicated more than $50 billion to climate-related initiatives.

““Rideshare drivers will be eligible just like all Californians, but will not receive any type of priority or preference.”“

“I’m lucky enough to be touched by this tax and I’m happy to pay it to help turn back the clock on this existential threat,” said Logan Green, co-founder and CEO of Lyft.

Environmental groups approached Lyft last year for support on a ballot measure to make electric cars more affordable, and “we saw an opportunity to put real resources into smart politics,” Green wrote in a blog post.

There is no money specifically earmarked for Lyft or the ride-sharing industry, he noted. “Ride-sharing drivers will be eligible as well All But Californians will get no priority or preference.”

Lyft referred comment to “Yes 30” spokesman Steven Mavigli. There is “no way” the state’s residents can get to the 2035 goal of no new gas vehicles “without massive, dramatic measures to do that,” he said, rejecting the argument that higher taxes on the rich will scare people away with high incomes.

“Lyft thrives because everyone in California benefits. There is not one line on the ballot that directs any money to Lyft,” Maviglio said.

“He was not involved in the Prop 30 proposal and we have no connection to the campaign,” a company spokesperson told MarketWatch. “We believe that tackling climate change is a team sport. That’s why we’re committed to working with the State of California and industry partners to go green as quickly as possible.”

Massachusetts voters have rejected the option to create a graduated state tax code five times, most recently in 1994.

Supporters hope this time will be different. “Issue 1 is an opportunity to improve our public schools, make college and vocational education more accessible, and fix our crumbling roads and bridges,” said Andrew Farnitano, chief spokesman for Fair Share for Massachusetts, a campaign committee backing the measure. Fair Share for Massachusetts is a coalition of supporters, including organized labor, social service providers, public health and environmental groups.

The chance for improvement is done “in a way that makes our tax system fairer,” he said.

Money for education and infrastructure are “very noble endeavors,” but there’s no guarantee the additional tax revenue will go there, said Dan Cence, a spokesman for the coalition opposing Question 1, which includes businesses and trade groups.

State coffers are filling with excess cash, and Cence said one concern is driving away high-income earners and businesses in the state’s biotech industry. “They can do their research wherever they want. … We don’t want to kill the golden goose that is biotech in Massachusetts,” Cence said, noting that the jump from a 5% rate to 9% is an 80% increase in the size of the state’s income tax bill.

According to the Center for State Policy Analysis at Tufts University, the tax could raise $1.3 billion in revenue next year if it goes on the books. According to the researchers, “aggressive tax avoidance would be a bigger challenge than the exodus of high earners.”

It will be “difficult” to fully meet the commitment to spend money on education and infrastructure, the researchers said. “Even accounting for the imperfect earmarking effect, a millionaire’s tax would still generate substantial increases in a number of high-priority spending areas—potentially reducing economic and racial inequality.”