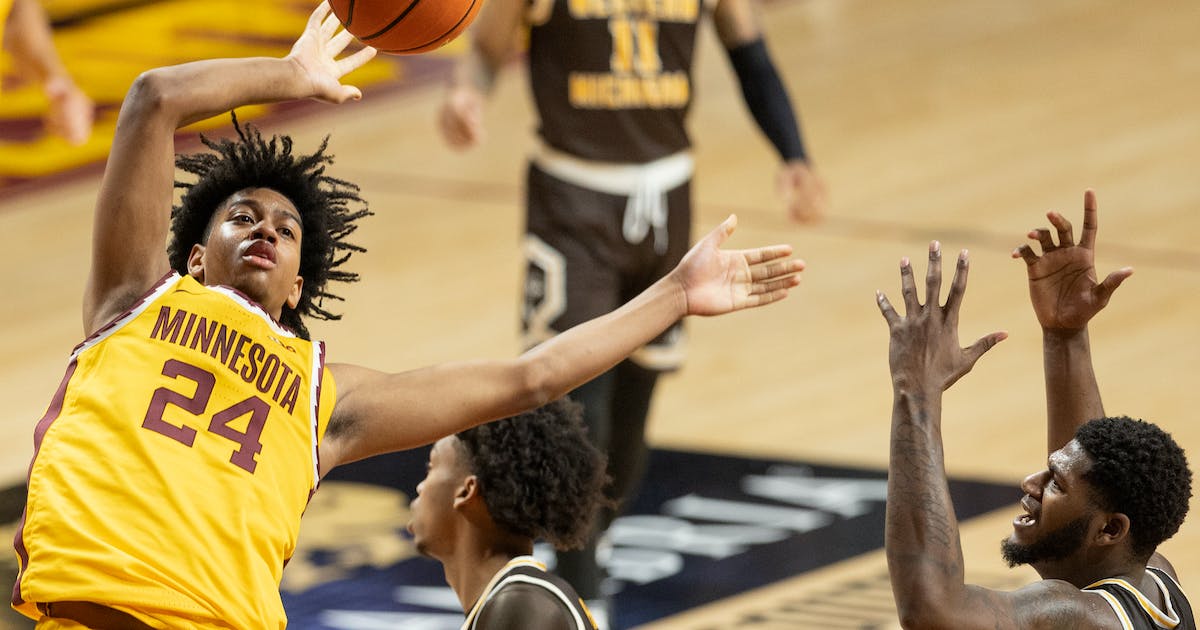 Fast forward to this week and the 6-7 freshman from Ontario, Calif. started at guard for the Gophers in the SoCal Challenge.

“It felt really good to be able to play in front of my family at the next level,” Henley said. “It was a great experience for me.

The Gophers had been building a presence in Southern California long before they arrived during Thanksgiving week. California natives on the team include Henley, graduate transfer Taurus Samuels (Oceanside) and Jenkins (Lompoc).

This week’s SoCal Challenge brought home-court atmosphere to the Gophers with a strong fan turnout that included friends and family members of the players inside the 2,000-seat pavilion at J Serra High School.

But the U’s recruiting base continues to establish itself in the Sunshine State, especially recently with the signing of five-star Riverside center Dennis Evans III.

“Marcus did a great job and was a leader in building the relationship between Dennis and Jaden,” Johnson said. “I think when the Big Ten expands west with UCLA and USC, we can go to a house on the West Coast and you can talk about Big Ten basketball. It’s not weird. … It’s a little more realistic than it was before.”

Jenkins, who was hired as Johnson’s final assistant last season, grew up about three hours north of Los Angeles. He knows what it’s like to play college basketball far from home at Air Force, so he understands how the Gophers can find prospects willing to leave the state for the right program.

“It doesn’t seem like a natural cut, but when you peel back a few layers, it is,” Jenkins said of the Californians in Minnesota. “Why? It’s because of the people. Everyone from the top down. It starts with Ben and our staff, but also the fans, the alumni and the people of Minnesota.”

A three-star prospect out of Colony High School, Henley’s only scholarship offer was from San Diego State when Jenkins made him a priority with the Gophers last year. Other Power Five programs targeted Henley after he committed to Minnesota, but he was loyal to the Big Ten program that believed in him early in the recruiting process.

“He didn’t lie to me or anything,” Henley said of Johnson. “Usually, coaches try to put a recruit’s head on it, but they were really honest with me and I like that. I think they did the same thing with Dennis. I think that’s why Dennis loves it here, too.”

When Henley visited the Gophers last season to watch a game, his family was “blown away” by the fan support and campus environment. The same situation occurred when Evans took an official visit this fall before committing.

“I really liked the culture,” said Evans, who watched the Gophers beat Cal Baptist in overtime on Monday. “It’s great to see that they’re willing to go the distance just to find players that fit their program.”

The Gophers landing Evans and establishing a relationship with AAU coaches like Team Inland’s Kool-Aid Perry also helped them land other rising prospects in California.

Four-star junior Deshawn Gory, a 6-8 forward, played with Evans last season before transferring to nearby Oak Hills. Kentucky and Kansas are looking at him, but the Gophers are in a good spot with Gory early. Johnson also recently offered a scholarship to four-star junior guard Trent Perry from Harvard Westlake in Los Angeles.

“The Big Ten made it a little easier to plant Minnesota’s flag in California,” Jenkins added. “That helps us and makes it a little more natural. USC and UCLA can’t have all the guys. California is a big state. There are kids here that feel overlooked for some reason. We provide an opportunity to play at the highest level in probably the best league in the country .”