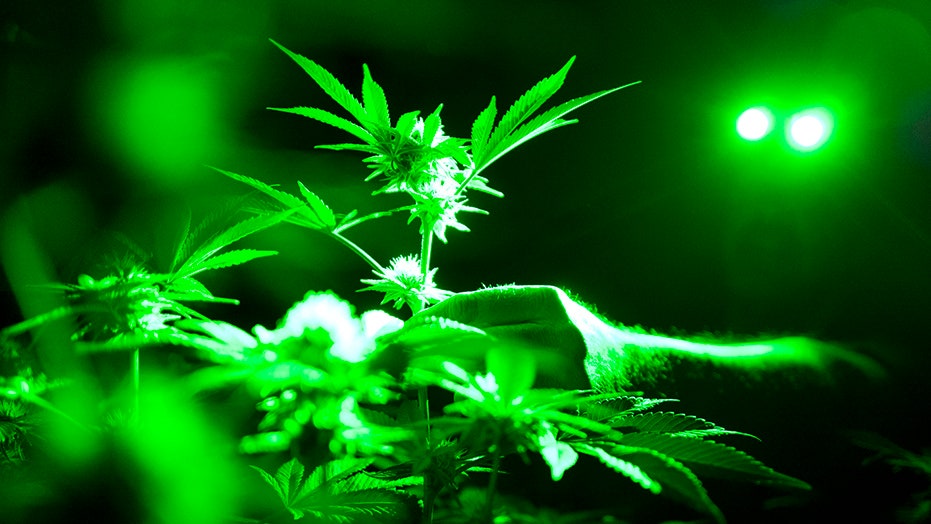 From the street it looks like a goat farm. Above, Riverside County, California sheriff’s deputies saw something else. Four massive white tents, known as hoops, containing $1.5 million in illegal marijuana plants.

“The illegal industry is competing with the legal industry and basically putting them out of business,” says Sgt. James Roy, Chief of the Riverside County Sheriff’s Department 12 member marijuana eradication team.

“This site is no different than the thousands of others we’ve hit this year, seizing about half a million plants in Riverside County alone,” Roy said.

California was the first state to legalize medical marijuana in 1996, followed by recreational pot in 2016. Since then, it’s been a disaster for the legal pot industry and law enforcement, which continues to crack down on illegal growers and dispensaries despite legalization.

MARIJUANA LEGALIZED IN THESE STATES IN THE MID-TERM ELECTIONS

“The price of everything in Los Angeles is going up, except for pot, it’s everywhere,” says Detective Mike Boylls of the Los Angeles Police Department’s Gang and Narcotics Unit.

“The state legalized pot and hoped to make it a legitimate market. But the problem is these illegal shops come in and undercut all the legal shops. They sell the product for almost half the price. So our job as law enforcement is actually harder, said Boylls.

The California experiment is important because the rest of America is at a crossroads. In November, two states—Missouri and Maryland—legalized recreational marijuana use by adults, bringing the total to 21. The initiative failed in three states—North and South Dakota and Arkansas—as additional data showed higher levels of THC in commercial production concerns public safety experts. According to a study published last year in the American Journal of Public Health, the percentage of cannabis-related crash deaths more than doubled from 9% in 2000 to 21.5% in 2018, and the percentage of both cannabis- and alcohol-related deaths more than doubled.

“We’ve been told that if we legalize it, we’ll get rid of the drug dealers, we’ll cut down the illegal market a lot. People will buy it up and up and there won’t be an underground market anymore,” says Kevin. Sabet with the Foundation for Drug Policy Solutions.

“But the opposite has happened. Ever since California legalized marijuana, the illegal market has exploded because the demand has shot up so much thanks to great marketing. We know that marijuana is a lot worse than people think. But, you know, the prevailing perception is, that it’s not a big deal,” Sabet said.

California’s problem starts with the economy. Seeing a cash cow, lawmakers, including Gov. Gavin Newsom, backed proposals to legalize the drug despite the federal ban. By requiring licenses to grow and transport pot, retail sales permits, and purchase taxes, the state imposed a 70% tax on legally purchased marijuana.

While advocates say the prescriptions are safe and certified pesticide- and chemical-free, the high price has pushed sellers and consumers back to the illegal black market. California taxed $5.6 billion in pot sales last year, but police estimate illegal sales are twice as high — with 10 illegal farms for every one licensed by the state.

“It’s definitely profitable for the illegal market,” says Roy. “Here on the West Coast, they sell greenhouse marijuana for anywhere from $500 to $2,000 a pound. But if they take the exact same product and send it back east, it’s double and triple that.”

Matthew Schweich of the marijuana reform nonprofit Marijuana Policy Project says California is to blame for killing the golden goose.

MISSOURI VOTERS TO VOTE ON RECREATIONAL MARIJUANA IN NOVEMBER

“We’ve spent a century outlawing cannabis and driving people into the illegal market. Then it’s legalized, but the tax rates are too high. It’s just a simple cost analysis,” Schweich said. “People can buy cannabis cheaper than going to a regulated licensed business because the tax rate is too high. So when you have a state that allows cannabis possession and home cultivation versus a long list of states that don’t, the implication is that people can take advantage of that policy, grow more than they should and bring it to states where it’s illegal.”

In last week’s crash, Roy’s team destroyed 3,000 plants and a nursery. Dozens of rows of plants up to six feet tall stretch about 30 yards in each greenhouse. A row of bulbs along the ceiling allows farmers to get two additional harvests each year, maximizing profitability. Inside the house next door, deputies found two growers hiding in a closet. A third man ran into the desert but was tracked down by helicopter.

“With these growers, with these illegal growers, comes a significant amount of violence and a lot of guns,” says Roy. “Every day we serve warrants on operations like this. And in 80% of the locations we find guns, high powered weapons, assault rifles and things like that.”

In 2020, Riverside linked 14 murders to illegal marijuana operations, including seven shootings at a large processing center. Nothing was taken. The victims were from Laos. Police say California’s illegal grow operations are typically financed and run by either Asian organized crime or Mexican cartels, who routinely try to put each other out of business. Distribution is less centralized, but American street gangs often control street sales to illegal dispensaries.

“There’s such a large scale of illegal cannabis business coming in that we have to shut these places down,” says Boylls of the LAPD.

The problem is that when voters decriminalized marijuana, they robbed the police of the tools they use to make traffic stops. Felonies and misdemeanors became misdemeanors and misdemeanors. Suspects ignore court orders and prosecutors don’t take cases. Because there are no penalties, no one goes to jail, and pharmacies consider fines a cost of doing business. The store raided by the LAPD last week was closed by police seven times. This year alone, the LAPD has killed more than 300 illegal dispensaries.

“This will most likely open in a day or two. And we’ll have to deal with it again,” Boylls said.

“So my advice to other states is — don’t put the cart before the horse. Don’t decriminalize the drug until you have your processes in place and you know how you’re going to enforce the regulations used to control the illegal business.” , otherwise you’ll be playing catch-up,” he continued.