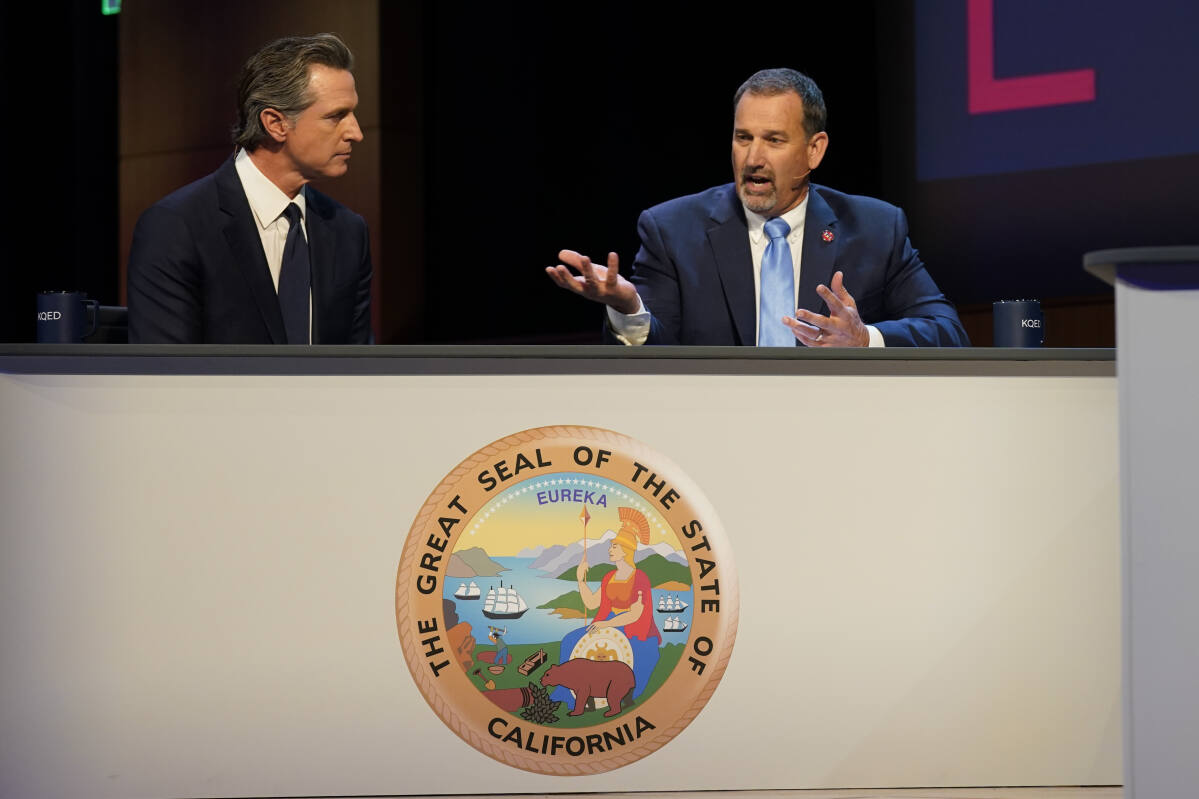 Most California voters think the state is headed in the wrong direction, yet they intend to re-elect the governor who is leading us there. That looks bad.

But two modern realities explain it. Political polarization has swept across America. And in California, most voters have lost all faith in the Republican Party. They will choose a majority of Democrats over a GOP candidate, especially for statewide office.

That and the fact that there are almost twice as many Democratic voters as Republicans. Both sides are polarized, but it’s a lopsided matchup.

That’s according to a statewide poll released Wednesday by the nonpartisan Public Policy Institute of California.

With Election Day less than two weeks away, Democratic Gov. Gavin Newsom leads Republican Sen. Brian Dahl among likely voters by a virtually insurmountable 55% to 36%. Newsom is ahead in every major state region except the Central Valley, where they are statistically tied.

More voters intend to vote for Newsom than approve of his job performance, though the difference is not as large — 3 percentage points.

But another statistic is eye-opening: 54% of voters think California is “going in the wrong direction.” Only 43% believe we are on the right track.

Still, Newsom is running away with the election.

“One of the biggest takeaways from the survey for me was that even at a time when 54% of voters think the state is headed in the wrong direction, a majority is willing to support the governor,” says Mark Baldassare, PPIC president and pollster.

“That says a lot about the current political context. Voters are so polarized in California.”

Past generations of Californians have voted for a candidate across party lines. No longer.

His decision to side with the California Teachers Association in opposing Proposition 30 could have doomed the ballot measure.

It would raise state income taxes on California’s wealthiest residents, largely to help motorists buy electric vehicles — including ride-hailing drivers for Lyft, a big bankroller of the measure. The powerful teachers’ union opposes it because schools would be cut out of new tax revenue from the measure.

“There is no need for a voter to say, ‘Someone is trying to deceive me. I’m not an expert on this. No, I’ll wait until next time for something clearer.'”

On another front, Newsom was strong enough to set up a poor excuse for the campaign’s only gubernatorial debate. Little planning input was allowed from his Republican opponent.

The timing was almost laughable: at 1 o’clock in the afternoon on a beautiful autumn Sunday. If voters weren’t out having fun, they were probably watching pro football on TV.

Of course, Newsom wanted to make sure no one was watching the debate. So he dictated that it be broadcast on the radio – at a time when virtually no one tuned in. C-SPAN aired a delayed telecast at dinner time.

It’s an old, if nasty, political strategy: If you’re way ahead in the polls, don’t risk letting voters watch you say something really stupid during a debate. And don’t give your unknown opponent, who can’t afford TV ads, a chance to introduce himself to voters.

“I always wanted to schedule the debate on the same night as the Oscars,” says Dan Schnur, a former Republican operative who teaches political communication at the University of Southern California and UC Berkeley. “Give Newsom that he’s about 1,000 points ahead and he could probably get away with not debating at all.”

Schnur, like several political professionals I called, didn’t bother to catch the debate. So they considered it significant.

One of the Republican consultants who listened — while watching the San Francisco 49ers game — was Matt Rexroad.

“Actually, I think Newsom played pretty well,” he says. “He was always on point. No shortage of facts.”

Yes, Newsom is uniquely capable of storing a lot of hard drive data in his head and spewing it out non-stop. It’s an impressive but often painful attempt at digestion.

Newsom tried to turn Dahle into a MAGA Trump disciple. He called his unlucky opponent a “passionate supporter” of the former president, who is the devil incarnate among California Democrats.

A Trump voter, yes, but never with any sign of passion.

Dahle attacked Newsom as a governor who is so busy running for president that he is ignoring his own state’s problems with homelessness and unaffordability.

Newsom has been flying around the country promoting California liberalism — particularly on abortion rights — and trying to gain a foothold in the national arena. But I doubt he’s running for president now.

If there were any messages from the debate, it came when the moderator asked Newsom if he would commit to serving a full four-year term, thereby missing out on a possible 2024 presidential run.

But we have already heard that from other politicians. It’s a commitment that can be broken quickly without much penalty.

Ask Newsom again in a year — after he’s re-elected even though people aren’t happy with the direction the state is headed.

George Skelton is a columnist for the Los Angeles Times.

You can send letters to the editor at [email protected]