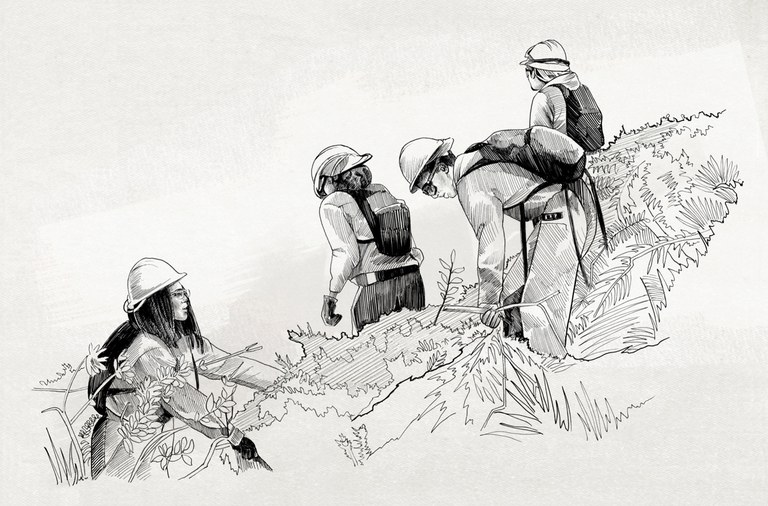 It was noon – and lunch time. Armando Jimenez and Jesús Chavez took off their helmets and sat down at a picnic table at Memorial Park in Marin County, California. The park is bordered on three sides by a children’s playground, a parking lot and a baseball field. If he was threatened by fire, he would probably approach from the fourth side, a steep hill which until recently had been covered with burning brush.

Thanks to Jimenez, Chavez and their crew members, this slope has since been cleared of small trees, branches and twigs. Now, if a spark were to start a fire, the flames would be much less likely to climb into the treetops and start a dangerous fire.

Jimenez and Chavez are part of the first cohort of the FIRE Foundry, a vocational training program that aims to diversify the Marin County Fire Department and perhaps serve as a model not only for the firefighting profession but for the broader conservation workforce. With funding from the State of California and earnings from its own fuel reduction services, FIRE Foundry offers its recruits full-time employment, temporary housing at the fire station, assistance with basic expenses, mental health support, tutoring, free uniforms and shoes, a full scholarship to local community college and training in emerging fire technologies, including remote sensing programs and predictive services.

“I would really like to see more minorities in the fire department,” said Jimenez, 21, who was born and raised in Mexico and sought asylum in the United States in 2010. “That’s the main thing (to) Join.”

Despite studies that suggest communities are best served by first responders who reflect local diversity, professional firefighters are overwhelmingly white and male — both in Marin County and across the country. Marin is one of California’s wealthiest counties. It’s also the most segregated district in the Bay Area, so a few years ago Fire Chief Jason Weber decided to address his department’s diversity problem by addressing its deeper causes.

One of those causes, Weber said, is that the “feeder programs” that bring people into the profession — volunteer and seasonal firefighting programs, junior high school courses that lead to further training — offer low or no wages. “We’re trying to break that mold,” he said. “We’re trying to break systemic cycles of poverty, generational poverty, and that ties into the importance of a career with a sustainable wage.”

While the program is still in its infancy, observers say its approach could help diversify related professions in land management and restoration. “I know the world (of conservation) really well, and it is and always has been dominated by white men,” said Rhea Suh, current president of the Marin Community Foundation and former head of diversity programs for the Department of the Interior. “It’s fascinating to me that there are people on the ground like Fire Chief Marin who, without any outside pressure, says to himself, ‘We have to figure out a sustainable way to keep our pipelines going and … to attract more people of color, more women, we need to have a different attitude and posture.’

“These may be the great jobs of the next century.”

As the impacts of climate change deepen, Suh pointed out, the demand for workers trained in recovery and adaptation will only grow. “We know fires are coming. We know sea levels are rising. Why can’t we really think about a pipeline for these positions?” she asked. “These may be the great jobs of the next century.”

At the lunch table, Chavez said that at age 23, he was surprised to find himself back in school and taking EMT classes. But he said, “I have to face it. It’s about becoming a better person for yourself.”

As a child, he said, he wanted to join the fire service but didn’t know how to get there. He applied to FIRE Foundry after seeing an ad on Instagram. He soon took to the hard work, time outdoors, and camaraderie among his fellow firefighters.

“They get down and dirty,” he said. “I like that. They’re all close, like a whole family.”

Danielle Venton is a science reporter who focuses on wildfire resilience in the Gulf of California.

We welcome letters from readers. By email High Country News in [email protected] or submit a letter to the editor. Check out ours letters to the policy editor.