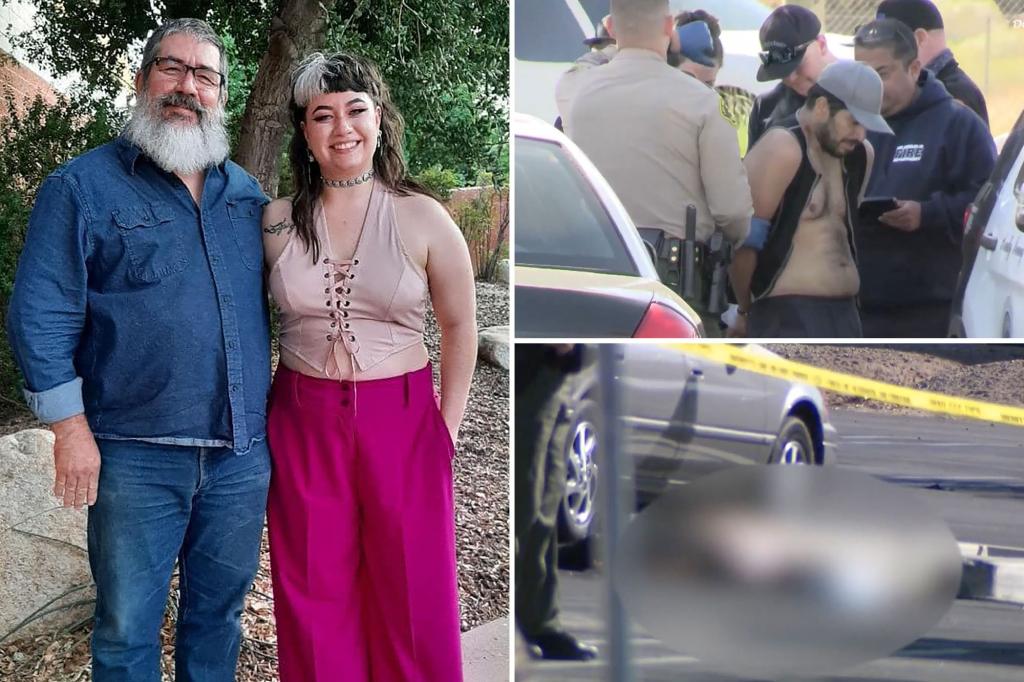 A California man and his 22-year-old daughter were stabbed to death by a homeless man while working on their car outside a Kohl’s, police said.

Ken Evans, 54, and McKenna Evans were spending time together in their sedan around noon Thursday in Palmdale, north of Los Angeles, when the man attacked them for no apparent reason, the LA Times reported.

Ken was taken to hospital where he died while his daughter was pronounced dead at the scene.

LA County sheriff’s deputies arrested the suspect, who they say may be a transient, the newspaper reported.

Elizabeth Evans, the devastated wife and mother of the victims, mourned the shocking loss.

“She wasn’t just my daughter, she was my best friend,” the mother said Sunday of McKenna. “She was just full of joy and cared about people and animals.

She told KTLA, “She was an absolute beacon… She didn’t know a stranger. Everyone became her best friend.”

Elizabeth said her husband was a “loving father” who “loved spending as much time as he could with his daughter”.

Jesse Mercado, McKenna’s friend, told KTLA that he ran to the scene after the shocking crime.

“I wanted to hold her again. It was hard to know that the person who had changed my life so drastically – in a single day – had been captured,” he told the newspaper.

He described McKenna as a kind, caring and ambitious young woman.

“The first time I met her was at work,” Jesse told KTLA. “The moment she introduced herself was the day I fell in love with her.

The two met at an ice cream shop where they both worked and had been dating since February, the LA Times reported.

McKenna, who was awaiting her esthetics exam, preferred vegan products that were not tested on animals, her mother said, “because she cared about kindness and comfort.

Elizabeth said her husband was planning to move to Missouri and was trying to spend more time with his youngest child before he left.

“That was Ken – a risk-taker, always adventurous,” she told the paper.

The couple met in Kansas before returning to his native California, where Ken worked in construction and real estate, she said.

Their deaths come as recent crime statistics show several major US cities, including Los Angeles, are on track to surpass last year’s already shocking violent crime numbers. Over the past year, the number of murders in the city has increased by 7%.