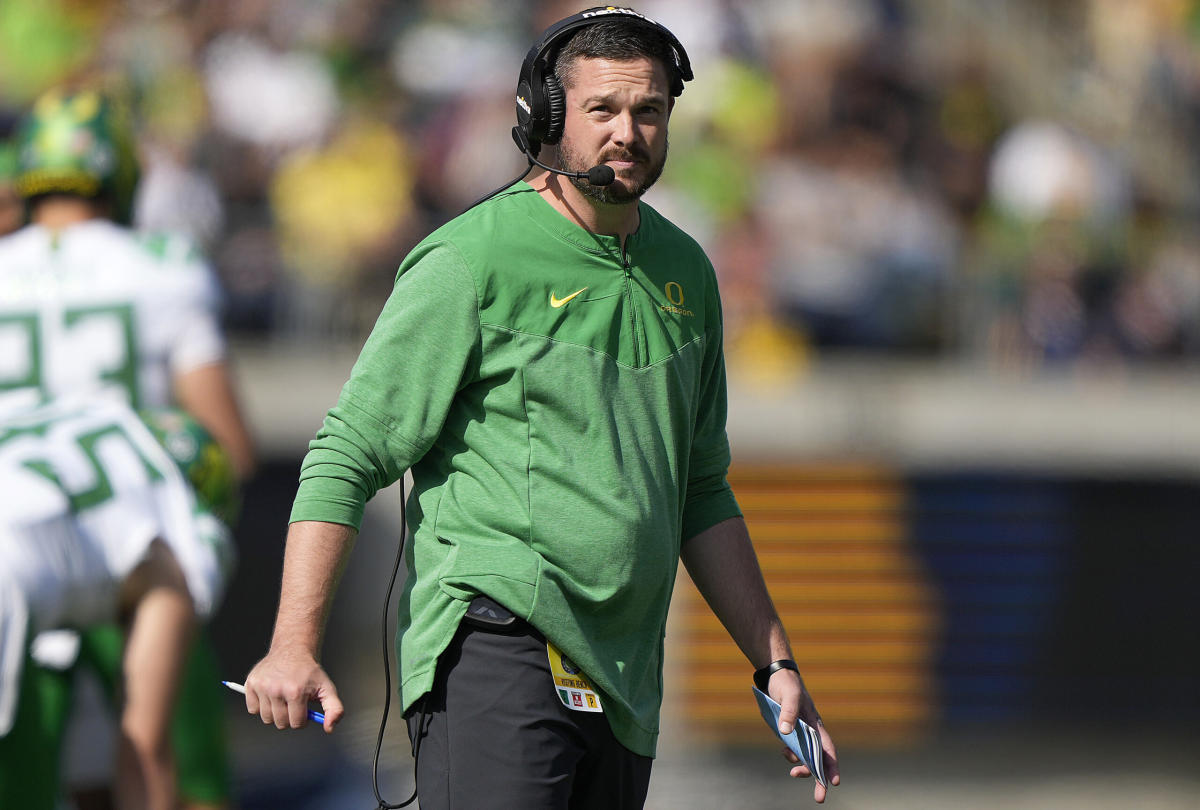 An 18-point victory for the Oregon Ducks will be on the scoreboard. The victory in a game in which they combined for 586 yards of offense – the most ever allowed by California head coach Justin Wilcox – and an impressive 6 total touchdowns from quarterback Bo Nix.

If you looked at the stat sheet and only saw the numbers, you’d come away with the impression that it was a dominant performance from the Ducks, who won their seventh straight game and scored more than 40 points for the seventh straight time. .

However, if you watched the game, then you know it was way below the Oregon football ceiling.

This is a team that can play much better than it did on Saturday if they tone down a few mistakes like dropped passes, empty red zone breaks and frustrating penalties. After the game, head coach Dan Lanning spoke to members of the media about the game and where the team could still improve. Here are some of the most notable quotes from that press conference:

Lanning: “It’s always great to go on the road and win. This is never easy. That being said, I think our team can play a lot more consistently at times. I thought we had some moments where we got some consistency. I think our players are growing to where they want to own the standard regardless of the situation. And sometimes we really had it and sometimes we didn’t. We struggled a little bit in the red zone at times, we gave up some big passes that we don’t want to see on defense. So I think there are moments of improvement all around for our team. I think our guys are hungry to get better. With that being said, we’ll move on from this.”

Question: What made the offense so productive today?

Lanning: “I think it’s hard to stop our team when we’re consistent and performing at a high level, no matter who the opponent really is. And again, when we were stopped, it was really like we were stopped.”

Question: What did you see from your defense today?

Lanning: “Regardless of who is present, our standard doesn’t really change. We didn’t finish the game the way we wanted. I think they had eight yards rushing in the first half, so it was nice to be able to stifle one side of the ball. We gave up a big pass. I would have liked it to carry over into the second half. Sometimes we did. I think we were a lot better on third downs, I don’t know what the final result was. This is where we looked for some improvement. I think we did a better job there. But we have to continue to play better ball and be more consistent throughout the game.”

Question: What do you take away most from this victory?

Lanning: “It’s just that we haven’t seen the best yet. I was hoping it would be a game where we could go away and see the best in us, and we haven’t seen that yet. I’m excited about how far we can go, but we have to take advantage of it and it’s a choice we have to make. Hopefully that will carry over into the future.”

Question: What did you think of how Bo Nix played today, especially early in the game?

Lanning: “I think Bo did a good job today. But I think if you ask Bo right now, he’d say he can play better. And I think our whole team probably feels that way. There are moments we can play at a higher level. I have to go back and watch the film and see if there were any balls in jeopardy for us. See what our decision making looks like. Bo has been really consistent and a really good player all year. I think he’s going to walk away from this show wanting to be better than him.”

Question: Were you at all surprised by your RB’s ability to be so effective in the passing game?

Lanning: “We felt this was a game where we could get the ball on our backs out of the backfield. And finally we wanted to do some shots. And I thought Bo made some good decisions there when he cashed the check.”

Question: What to take away from a slow start?

Question: How much of a boost is it to your offense when tight ends play as well as they do?

Lanning: “So what I like to talk about, I like to talk about how this group of men really love each other. And they are selfless. And sometimes it’s their turn, sometimes it’s not. They know when a certain guy is coming or going on the field who is playing for them. You will never hear a complaint from this group. I know each of them would love to touch the ball with every swing. But otherwise you never hear anything. And the fact that, I think you could see how excited our tight ends were when Pat scored that touchdown last week when Cam scored his, that’s a group that’s really unselfish. It likes to see other people’s success. And that’s what I’m really proud of with this group.”

Lanning: “I haven’t heard yet. No I do not know. I’ll have to wait to hear back from him.”

Question: Where do you think you can improve?

Lanning: “Blitz penalties, red zone finishes, defensive shots, defensive turnovers, there’s a lot of things that I walked away with that we could do a better job of and that we’re going to get better at.”

Question: What was the mentality going into this game after last week?

Lanning: “Humble and hungry. We wanted to go into this game focused on who was there with us in the beginning, not who came later. And the reality is, we talked about it after the first game, that really all our goals are ahead of us. And we want to continue to approach it this way and keep growing and improving. And I think we improved on some things today. But overall, there are still a few things we can definitely improve on.”

Question: What do you think of how Kris Hutson has grown this season?

Lanning: “I trust Kris, I think he’s done a really good job for us. He also did a good job for us today in the second leg. He caught the ball well. Obviously he’d love to come back, but that happens sometimes. And you’ve got to grow up and get back to the next game.”

Question: Any thoughts on the lack of conversions on fourth down from your offense today?

Lanning: “It was probably a good thing that happened to us. We’ve probably humbled ourselves a bit and it’s an opportunity for us to work on that and see if we can move the pile to the next team.”