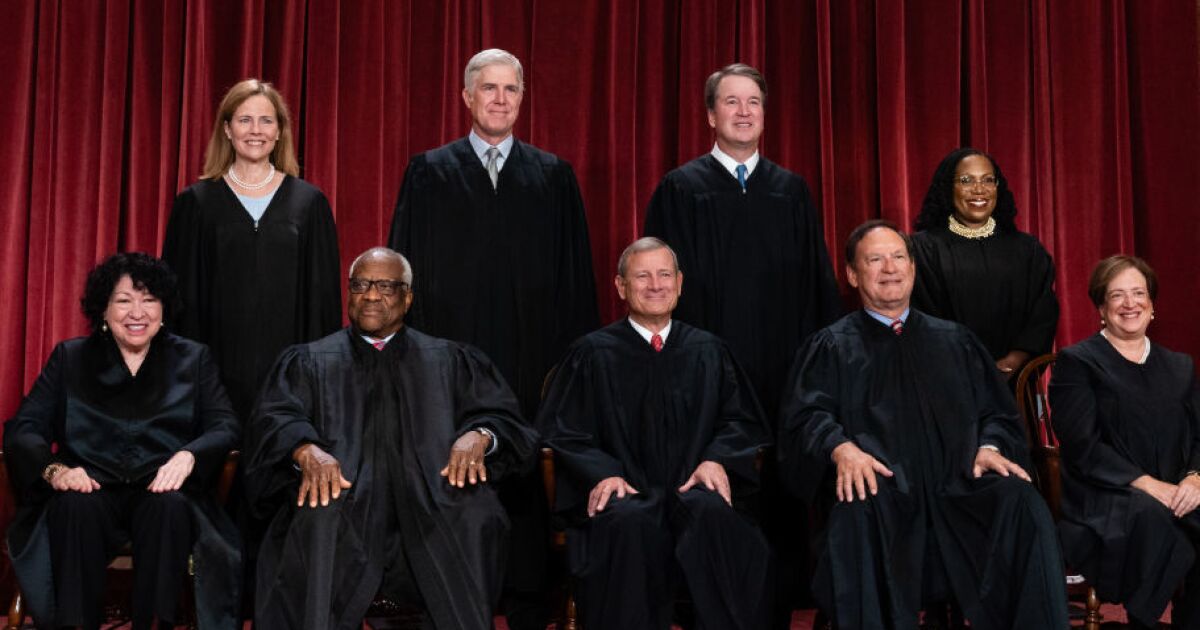 The U.S. Supreme Court returns to the issue of affirmative action in higher education on Monday, and the justices probably won’t be able to resist the remark that it’s Halloween.

The justices are rethinking decades of precedent upheld over the years by narrow judicial majorities that included Republican-appointed judges. This time, however, it is very likely that the new conservative court will overturn some or all of these precedents.

The baseline for permissible affirmative action programs in higher education was established in 1978. Citing Harvard University as a model, Justice Lewis Powell said that in evaluating applicants for admission, race cannot be a determining factor, but a university can use race as one of many factors, as well as taking advantage of other characteristics – special talent in music, science or athletics, and even the fact that the applicant’s parents attended university.

In announcing his opinion from the bench, Powell emphasized that “in selecting among thousands of academically qualified applicants,” a university’s admissions committee “considering a number of criteria” may pay “some attention to the distribution that should be made among the many types and categories of students.”

Since then, the court has more or less adhered to this principle in a number of cases, adding that each applicant must be assessed individually, holistically.

But today Harvard’s admissions system, cited as a model by Powell, is itself under the judicial microscope, along with the system at the University of North Carolina. UNC, which refused to admit any black applicants until the 1950s, is now widely ranked as one of the top three public colleges in the South, though like many top universities it struggles with a truly diverse student population. Only 8% of college students are African-American in a state that is 21% black.

Both cases overlap. Because UNC is a public school, the question is whether its affirmative action program violates the 14th Amendment’s guarantee of equal protection of the law. And even though Harvard is a private institution, it is still subject to federal anti-discrimination laws because it receives federal money for a wide variety of programs.

Ultimately, the same principle is at the heart of both cases: what constitutes racial discrimination?

On one side is Students for Fair Admissions, an organization founded by legal activist Edward Blum, which has fought for decades against what it sees as racial preferences in school admissions and other areas as well.

Harvard and UNC, on the other hand, say that in addition to academic excellence, they strive for a student body that is demographically diverse, and that in evaluating each candidate’s strengths, admissions committees “need to ignore a candidate’s race any more than they do the candidate’s home state, his or her national origin, family background or special achievements.”

This holistic approach to college admissions is used by a large number of colleges and universities, including the US military academies. Among the many academic institutions that filed in support of affirmative action are 57 Catholic colleges and universities, including Notre Dame, Georgetown and Holy Cross. And there are other reports filed by 68 of the nation’s largest corporations and a report filed by a long list of retired three- and four-star generals and admirals affirming the need for racial diversity in the upper echelons of the military. They say the lack of racial diversity in the officer corps during the Vietnam War led to tremendous tension, and even violence, between the mostly white officer corps and the mostly black and Hispanic soldiers, sometimes jeopardizing the war effort.

A difficult task in a conservative court

So academic institutions are making, or at least emphasizing, some new arguments aimed at the conservative doctrine of “originalism” and what was the “original intent” of the men who wrote the Fourteenth Amendment and its guarantee of “equal protection under the laws.”

The newest member of the court and the first African-American appointed to the court, Ketanji Brown Jackson, a Biden appointee, pointed to that history during oral arguments in another case on race earlier this month.

“When I got to that level of analysis, it became clear to me that the Framers themselves enacted the Equal Protection Clause … in a racially conscious way,” she said. “I don’t think the historical record demonstrates that the founders believed that race neutrality or race blindness was required.”

But Harvard co-counsel William Lee counters that SFFA’s use of Brown turns the 1954 court case involving the schools “on its head.” Brown, he says, dealt with it exclusion students based solely on their race, not with racial reconciliation events.

The Harvard case will be the second mooted Monday, with one judge absent. Judge Jackson recused herself because she sat on Harvard’s Board of Overseers during part of that litigation. She’s hardly the only Harvard-educated female judge. Four of the Justices—including Jackson and the Chief Justice—had attended Harvard College or Law School, or both. Judge Brett Kavanaugh and Judge Elena Kagan, who also served as dean of the law school for six years, taught there. But no one, except Jackson, had anything to do with the Harvard case.

SFFA’s lawsuit against Harvard is largely based on the challenger’s claim that Harvard discriminates against Asian Americans, who have better standardized test scores and grades on average than any other ethnic group, including whites.

SFFA’s Blum points to Harvard’s history of limiting the number of Jews by imposing a Jewish quota. “At Harvard today,” he claims, “Asians are really the new Jews.”

Blum’s initial submissions in the case relied heavily on the work of Berkeley professor Jerome Karabel, author of “The Chosen,” about Jewish quotas at Harvard, Yale and Princeton in the 19th century. But Karabel disputes Blum’s thesis and declined to work on the current case.

Karabel notes that there is a “critical difference” between the criticized Jewish quotas, which dramatically reduced the number of Jews on Ivy League campuses from the 1920s to the early 1960s, and today’s approach.

“Nothing like that happened” with Asian Americans at Harvard, he says. In fact, Asian-American enrollment has “continued to grow” — growing so much that 28% of students entering Harvard this year self-identify as Asian, while the country’s overall Asian population is 7.2%.

Much of Harvard’s argument Monday will rest heavily on the fact that SFFA’s allegations of discrimination were tested in court during a 15-day trial in which Harvard’s dean of admissions and members of the admissions committee were cross-examined and hundreds of thousands of emails were produced to investigation.

Harvard says in its briefs that academic excellence, while “essential,” is “only one factor.” Professor Karabel notes that Harvard’s size is “almost exactly where it was in the 1960s.” But the number of interested parties kept growing again and again. Harvard’s brief points out that of the 35,000 applicants competing for 1,600 slots in the class of 2019, 2,700 had perfect verbal SAT scores; 3,700 had perfect SAT math scores and more than 8,000 had perfect grade point averages.

The judge in this case, Judge Allison Burroughs, was an unsuccessful applicant to Harvard in her youth. But after the trial, her conclusion, upheld by the appeals court, was that there was “no evidence” of discrimination against Asian Americans. A federal judge in North Carolina reached a similar conclusion for UNC.

If the Supreme Court overturns or otherwise further curtails its previous affirmative action rulings, expect enormous ripple effects that extend beyond the issue of college admissions or admissions to selective public elementary and middle schools like Boston Latin or Bronx High School of Science.

Harvard co-counsel Lee says that if the court rejects affirmative action in college admissions, race-based policies in other areas, including employment, could be challenged.

“It will open a Pandora’s box across the country and across institutions and industries,” says Lee.

This means that affirmative action policies are not like abortion; they do not have the same level of public support. In 2020, liberal California voted by a 57% majority to not renew affirmative action at the state’s public colleges and universities. Other polls suggest similar, if sometimes conflicting, results. For example, a recent Washington Post-Schar School poll found that 6 in 10 Americans say race should not be a consideration in college admissions. But an equally strong majority supported programs to promote racial diversity at universities.

For Blum, racially oriented policies are not a new issue. Even like him brought about a decades-long challenge to affirmative action in college admissions, he proposed a successful challenge to a key provision of the landmark Voting Rights Act of 1965. The Supreme Court, by a 5-4 vote, struck down a section of the law that required areas with a history of racial discrimination in elections clear in advance to the Department of Justice any changes in voting procedures.

When asked what’s next on his agenda, Blum is coy, declaring, “I don’t have anything planned. I’m 70 years old… I’m nearing the end of my life.”

But last year he created a new organization that has already filed two lawsuits to challenge diversity goals on corporate boards.