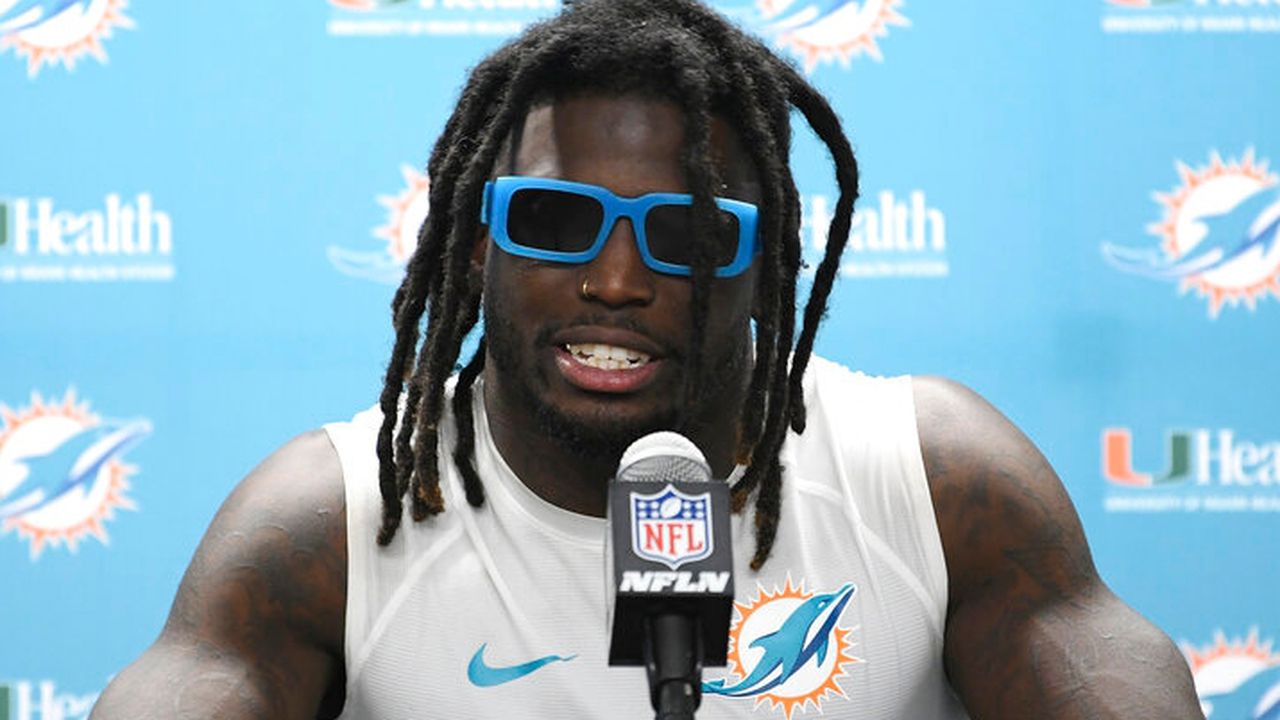 Former West Alabama standout Tyreek Hill was selected to the Pro Bowl in each of his previous six NFL seasons. These were spent with the Kansas City Chiefs. In his first season with the Miami Dolphins, the wide receiver looks like a lock to earn all-star honors again.

Hill had his fourth game this season with more than 160 receiving yards. All other players in the NFL combined have four.

With his fourth game in 2022 of at least 10 receptions and 150 yards, Hill tied Tim Brown, Calvin Johnson, Jerry Rice and Antonio Brown for the most such games in a single season in NFL history.

Hill was among 39 players from Alabama high schools and colleges (excluding Alabama and Auburn) to take the field on the eighth Sunday of the 103rd NFL season.

Three other former State players were involved in the Mami-Detroit game:

· Dolphins outside linebacker Trey Flowers (Columbia) is on injured reserve and unable to play.

· Dolphins running back LaMical Perine (Theodore) is on the practice squad and ineligible to play.

· Lions guard Logan Stenberg (James Clemens) played but did not record any stats.

In Sunday’s other matches:

· Jaguars tight end Gerrit Prince (UAB) is on the practice squad and ineligible to play.

· Darious Williams (UAB) started at cornerback for the Jaguars. Williams made three tackles and broke up a pass.

· Jaguars center Darryl Williams (Bessemer City) is on the practice squad and ineligible to play.

· Panthers running back Spencer Brown (Mortimer Jordan, UAB) ran for 27 yards on six carries. Carolina promoted Brown from its practice squad to participate in Sunday’s game, and he carried the ball for the first time in an NFL regular season game. Brown appeared in one game as a rookie in 2021, but only played special teams.

· Panthers cornerback Tae Hayes (Decatur) played but did not record any stats.

· Khari Blasingame (Buckhorn) started at fullback for the Bears.

· Nicholas Morrow (Huntsville) started at linebacker for the Bears. Morrow made five tackles, including one behind the line of scrimmage.

· Jalen Tolbert (McGill-Toolen, South Alabama) started at wide receiver for the Cowboys. Tolbert did not record any stats in his first NFL start.

· Cowboys defensive end Sam Williams (Lee-Montgomery) has been designated a game day inactive. The rookie was sidelined by a knee injury.

· Cardinals Center Rodney Hudson (BC Rain) has been marked as game day inactive. A knee injury sidelined Hudson for the fourth straight game.

· Vikings quarterback Nick Mullens (Spain Park) dressed for the game but did not play.

· Cardinals offensive lineman Lachavious Simmons (Selma) is on the practice squad and ineligible to play.

· Za’Darius Smith (Greenville) started at outside linebacker for the Vikings. Smith made seven tackles, recorded three sacks, registered four tackles for loss and broke up one pass. Smith has 8.5 sacks this season. Smith became the sixth player this season to record three sacks in one game. Smith’s final sack on Sunday came with Arizona at the Minnesota 37-yard line, and he dropped Cardinals QB Kyler Murray for a 7-yard loss with 10 seconds left in the game.

· Raiders running back Ameer Abdullah (Homewood) caught four passes for 28 yards, returned a kickoff 20 yards and made one tackle on special teams.

· Saints running back Jordan Howard (Gardendale, UAB) is on the practice squad and ineligible to play.

· Saints quarterback Jameis Winston (Hueytown) dressed for the game but did not play. Winston started the first three games of the season for New Orleans before back and ankle injuries sidelined him. Winston was a full participant in practice last week, but the Saints opted to stick with Andy Dalton as the starting quarterback for Sunday’s game.

· Kwon Alexander (Oxford) started as a backup for the Jets. Alexander made six tackles, including one behind the line of scrimmage.

· Patriots cornerback Marcus Jones (Enterprise, Troy) made one tackle and returned two punts 32 yards — one for zero yards and one for 32. The longer return gave New England possession at the New York 27-yard line and set up a third-and-fourth field goal.

· Quincy Williams (Wenonah) started at linebacker for the Jets. Williams made seven tackles and recorded two tackles for loss.

· James Bradberry (Pleasant Grove, Samford) started at cornerback for the Eagles. Bradberry made three interceptions and broke up one pass.

· George Pickens (Hoover) started at wide receiver for the Steelers. Pickens was targeted three times but had no reception.

· Steelers outside linebacker Malik Reed (Dothan) made four tackles, recorded one sack and broke up one pass. Reed’s sack was his first of the season.

· Steelers offensive lineman Trent Scott (Lee-Huntsville) played but did not record any stats.

· Quez Watkins (Athens) started at wide receiver for the Eagles. Watkins was targeted once but had no reception.

· Zach Cunningham (Pinson Valley) started at inside linebacker for the Titans. Cunningham made four saves in his return after missing the previous three games.

· Ben Jones (Bibb County) started at center for the Titans.

· Titans linebacker Monty Rice (James Clemens) played but did not record any stats.

· Bobby McCain (Oxford) started at free safety for the Chiefs. McCain tied for the team lead with eight tackles.

· Chiefs safety Jeremy Reaves (South Alabama) played but did not record any stats.

· Offensive tackle Korey Cunningham (Montevallo) is on the practice squad and ineligible to play.

· Giants cornerback Cordale Flott (Saraland) has been marked as game day inactive. He missed the fifth game in a row with a calf injury.

· Mike Jackson (Spain Park) started at left guard for the Seahawks. Jackson led Seattle with seven tackles and broke up three passes. Both stats are career highs. Jackson had two tackles in six games this season and broke up two passes in a 51-29 win over the Detroit Lions on Jan. 2.

· Packers wide receiver Kawaan Baker (South Alabama) is on the practice squad and ineligible to play.

Week 8 concludes on Monday when the Cincinnati Bengals and Cleveland Browns square off at 7:15 PM CDT at FirstEnergy Stadium in Cleveland. ESPN, ESPN2 and ESPN Deportes will televise the game.

FOR MORE AL.COMNFL COVERAGE, GO TO OURS NFL WEBSITE

Mark Inabinett is a sports reporter for the Alabama Media Group. Follow him on Twitter at @AMarkG1.