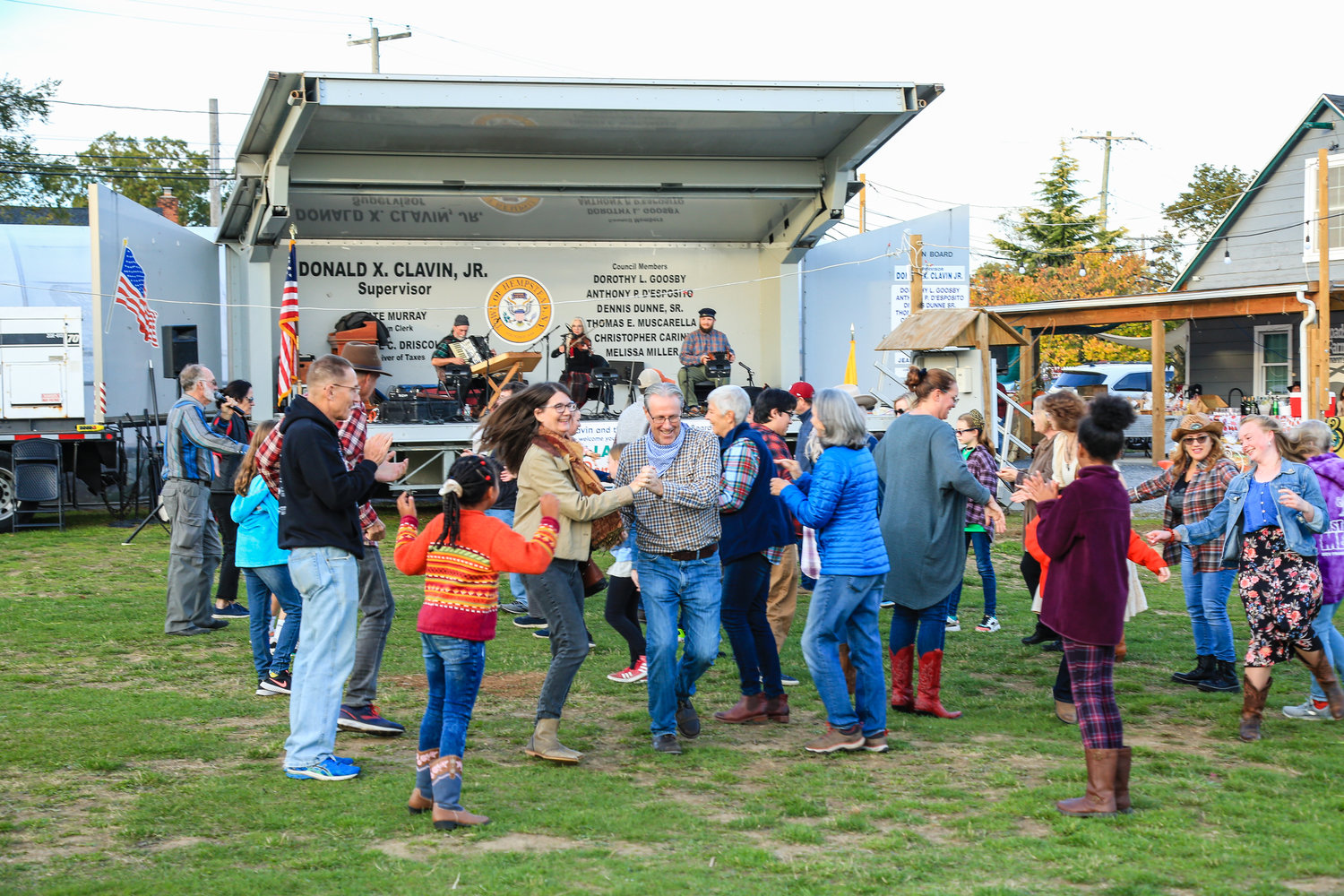 Dancers turned out Saturday night at Crossroads Farm at Grossmann’s for its second annual barnyard dance, making out on the farm to the sounds of live music and indulging in sizzling barbecue and a wide selection of beverages.

Annie Sunshine, the farm’s events co-ordinator, has put together a night of music and dancing, with all proceeds going towards the continued operation of the farm.

“It’s a fun night and it’s really a fundraiser to keep the farm going,” Sunshine said.

While she organized the event, dance caller Chart Guthrie took charge of the night itself.

“He’s famous,” Sunshine said of Guthrie, who boasts a long career in the dance profession. “He is well known for line dancing and square dancing.”

Guthrie was more modest when reflecting on his career. “I’ve been calling for a long time,” he said. “I always liked to dance. I believe someone associated with Crossroads saw me calling Hallockville Farm in Riverhead. I’ve been barn dancing there for about 20 years.’

Although originally from Tennessee, Guthrie didn’t start dancing until he moved to Long Island.

“I call pretty much all over Long Island,” he said.

He said he dances in Smithtown, usually the second Friday of each month, and in November and December the dance will be held on the second Sunday from 2 to 5 p.m. The Long Island Traditional Music Association hosts the dance.

“I’ve been running that dance since the mid-1980s,” Guthrie said.

His dance steps remain simple but fun and lively. “If you can walk,” he said, “you can dance.”

Several vendors have set up stations around the farm for guests to enjoy. Oceanside-based Barrier Brewing Company brought a number of their beers to the farm.

“We like to keep things local,” said Kira Guarniere, a representative for the brewing company. “We’ve been here since 2009. We’re one of the older craft breweries on Long Island. We just want to make sure everyone in the community knows what we have to offer.”

The farm staff also gave out some of their own offerings. A variety of wines produced from Long Island wineries were available, and items from the farm’s own harvest and from other local farms were also for sale.

The farm staff gave out cups of their own vegetable chilies and sold chili ingredient kits, using some materials straight from the farm.

Visitors to the farm could also pair their chili with Alabama-style barbecue. Saturday night’s refreshments were provided by Sweet Annie’s Smokehouse, a barbecue company based in Malvern. Sweet Annie’s also recently served food at the Crossroads Farm Fall Family Festival and the Malverne Chamber of Commerne’s annual Fall Festival.

The smokehouse was the brainchild of Nick Parlato, who was first exposed to the cooking style while visiting his younger brother, Michael, who was attending the University of Alabama.

“My parents and everybody went to visit him at school,” Parlato said. “They came back and told me all about the different types of cuisine down there. I did my own research. I spent my days in libraries, traveling, trying different barbecue places, reading different books, going on YouTube and then just creating my own recipes. I started cooking just for family and friends and eventually turned it into a business.

“I’ve been smoking food for about eight years,” Parlato added. “We have officially been in business for almost two years. This is truly something we hold a special place in our hearts for. It’s my passion and it’s a family business.”

The evening was a delight for young and old visitors to the farm, between hot food, local drinks and simple, fun dances.