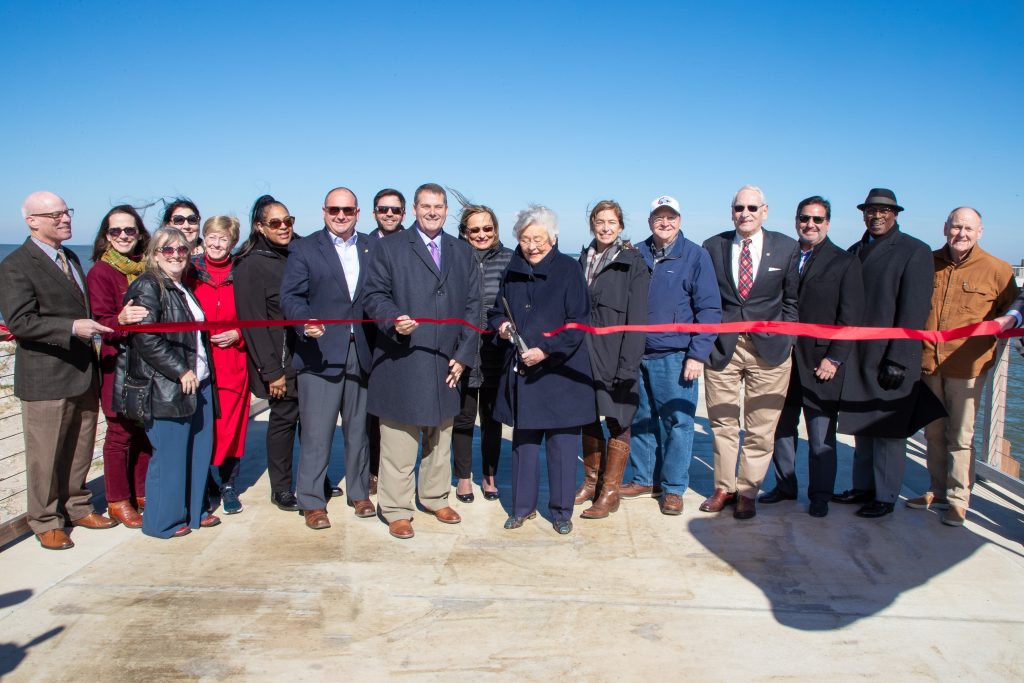 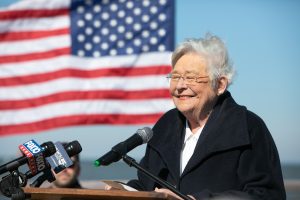 The facility was named in honor of the late Rep. McMillan, who served Baldwin County in the Alabama House of Representatives since 1980.

Governor Ivey said the reopening of the pier and renovated boat ramp is a great way to recognize Alabama’s great statesman.

“I am honored to be here to honor Representative Steve McMillan’s service to this area by naming this pier and boat ramp after him,” said Governor Ivey. “For more than 40 years, Steve has served with distinction few can imagine. His work demonstrated his dedication to southern Baldwin County, particularly the Fort Morgan area. I was certainly proud to call Steve my friend. As a ‘thank you’ for the work Steve has done for Baldwin County, it is only fitting that this boat ramp and pier bears his name. State Representative Steve McMillan Fort Morgan Fishing Pier and Boat Ramp has been a long time coming. There was a wharf on this site even before the Civil War.”

Gov. Ivey said access to great fishing in the lower end of Mobile Bay was greatly missed after the old pier closed in 2014. With the new facilities, recreational opportunities will once again be abundant and contribute to the state’s tourism economy.

“When the old pier became unsafe and was forced to close, we understood that rebuilding this pier was necessary,” Governor Ivey said. “Not only did we realize that we needed to keep Alabama’s history alive, but we knew that this redevelopment would enhance recreational use of our state’s beautiful natural resources. This new pier and boat ramp and reservoir will provide access to the fishery and waterways for all. This was a much-needed project, and I’m excited to see so much more good work happening in coastal Alabama with the help of Commissioner Blankenship and his team.

“We just announced more than $47 million in National Fish and Wildlife Foundation-funded projects for the area, and there is much more to come. It doesn’t take much to realize that Baldwin County is a huge catch for our state’s tourism industry, and I fully expect that industry to grow even stronger with the opening of this boat ramp and pier. Commissioner Blankenship and I have cut ribbons at several boat ramps over the past few months, and I can’t think of a single place more beautiful or historic than this place for the public to see.”

This project was funded through the North Resource Damage Assessment (NRDA) from the BP oil spill in 2010. The renovated pier is L-shaped, measuring 305 feet by 210 feet and 40 feet wide. The floor of the pier is 8 feet above the water level at mean tide. The boat ramp has two lanes with adjacent docks and the fishing pier also serves to protect the reservoir from silting and storms. The area is open 24 hours a day with free entry. 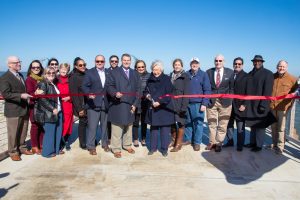 “I am very blessed to be the Conservation Commissioner,” said Commissioner Blankenship. “There are many things we can do across the state that are valuable to our quality of life in Alabama. Projects like the construction of this pier and the renovation of the boat ramp by our Division of Marine Resources are critical to our enjoyment of the water and fishing. We also have a governor who believes outdoor recreation and boating access are very important.

“During Governor Ivey’s tenure in Demopolis, Orange Beach, Camden, Oak Mountain State Park, Bon Secour, Grand Bay, Bayou La Batre and the Mobile Causeway, we have had ribbon cuttings for public boat access projects. or public access. And that’s not the end. It’s just the beginning. There will be more to come in the next four years of Governor Ivey’s term.

Rep. McMillan’s twin brother, John, talked about how special the Fort Morgan area is to their family.

“We had an aunt who had a cabin right on the beach,” said John McMillan, who has served as conservation commissioner, agriculture and industry commissioner and state treasurer during his career in public service and now continues in public service at the helm of the state of Alabama. Medical Cannabis Commission as its director. “There wasn’t much down here back then. Back then we did a lot of fishing and walking on the beaches. The most memorable thing we did was walk down the beach to Fort Morgan and visit with Hatchett Chandler, the warden there for several years.

“We had cousins ​​who had houses on this peninsula. We spent a lot of our childhood down here fishing. Steve loved fishing. That is certainly due recognition.”

Governor Ivey and Commissioner Blankenship were able to present a resolution to Rep. McMillan to name a facility at Fort Morgan in his honor before his death.

“There’s nothing you all could do that he would appreciate more because of the lifelong connection he had with Fort Morgan and this peninsula,” John McMillan said.

The pier property and boat ramp are owned by the Alabama Historical Commission, which approved the construction of new facilities on the site of the previous pier, which was closed when it became unsafe due to age and battering from numerous hurricanes and tropical storms. Because the new pier is located on a historic site, special rules applied to the excavation of the area, which extended the construction timeline.

“We’ve dealt with a lot of historic preservation issues on site,” said Commissioner Blankenship. “And now we can celebrate the culmination of this work.

Dr. Jim Day, Chairman of the Alabama Historical Commission, expressed his appreciation to Governor Ivey for her support of historic preservation in the state of Alabama. Day said the Commission is grateful to partner with the Alabama Department of Conservation and Natural Resources to honor Rep. McMillan.

“We are grateful to Steve McMillan and his family for their support of historic preservation and Fort Morgan in particular,” Day said. “Mobile Point, where we are today, has been part of America’s coastal defenses since Fort Bowyer was built here in the War of 1812. Construction of Fort Morgan was completed in 1834. Military occupations at Mobile Point include the Civil War, the Spanish–American War, World War I war and World War II.

“Soldiers stationed at Fort Morgan always needed recreation. Over the years, many wharves, piers and docks have been built around the site to support activities at the fort and serve as recreational opportunities for soldiers and their families. These structures were built for the transport of supplies, wharves for vessels, fishing for soldiers, tanning and quarantine wharves for a hospital. We are thrilled to have this pier restored for the public to enjoy and continue to experience the history here.” 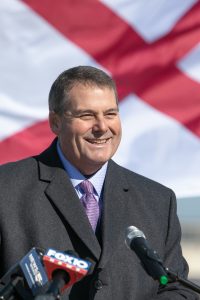 Patrick Bussey of GUMBO (Gulf United Metro Business Organization), a coalition formed to support southern Baldwin County, said Steve McMillan was his only state representative during his 35 years on the Alabama Gulf Coast, and it’s fitting to honor him with the name of the pier and boat ramp.

“My whole life down here, Steve has been our leader in Montgomery,” Bussey said. “It’s definitely an unbeatable service. Steve was a workhorse. If you went into Steve’s office, there were stacks of papers on projects he worked on on behalf of this district, this district and the entire state. Steve loved this Gulf Coast and worked hard to ensure that this resource was protected and used for the benefit of the people of the state of Alabama.”

Commissioner Blankenship said four funding sources were used to provide the $4.5 million needed to complete the pier and boat ramp.

“That includes sport fish restoration dollars and fishing license dollars,” Commissioner Blankenship said. “For NRDA approval and permitting, it involved seven different federal agencies, six state agencies and more. When dealing with the many challenges of weather, material shortages, heritage preservation, and many other challenges, it’s definitely a good idea to cut that ribbon.

“This facility will forever bear Steve McMillan’s name and will be a lasting testament to his dedication to southern Baldwin County.”