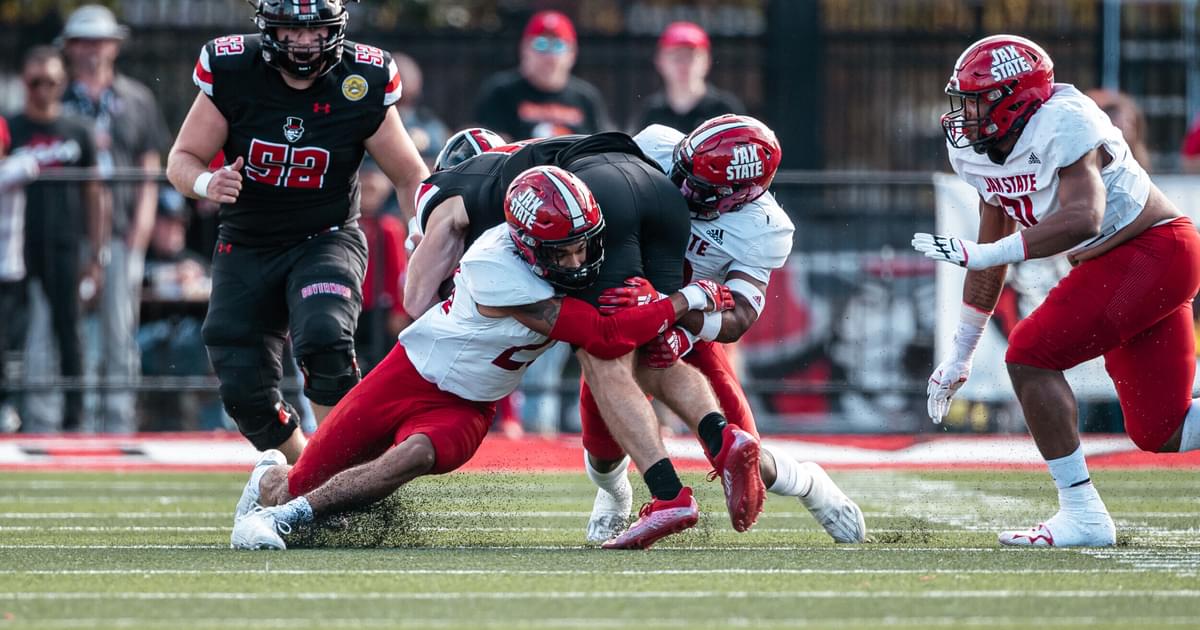 Jacksonville State won the second half in decisive fashion Saturday afternoon against ASUN foe Austin Peay. Because of that, the Gamecocks walked away with an impressive 40-16 road victory over one of the conference’s better teams.

“I thought we played solid in the second half, in all three phases, and that was the difference,” Jacksonville State head coach Rich Rodriguez said. “Our guys hung in there. We wanted to give them some different wrinkles in the second half and we changed some formations and ran some things that we put in a couple of days ago. We had to reach into the bag of tricks, so to speak, in the second half.”

One of those trick plays was a double reverse that started with quarterback Zion Webb’s handoff to running back Pat Jackson, who threw it back to receiver Sterling Galban. Webb rolled into the flat and Galban hit him for a 5-yard touchdown pass to the JSU quarterback. It was Webb’s first career touchdown.

Webb, a sixth-year senior, was 12 of 24 for 186 yards with a touchdown pass and an interception. He carried the ball 14 times for 75 yards and had a touchdown reception. His touchdown pass was a 48-yard connection to Perry Carter that opened the scoring.

The teams were tied 16-16 in the first half, but the Gamecocks scored 24 unanswered points in the second half. Matt LaRoche rushed for 89 yards with a touchdown and Jackson rushed for a touchdown.

SAMFORD 38, CITADEL 3: All three phases contributed to the win, which made Samford coach Chris Hatcher a happy man.

“I’m very excited,” Hatcher said. “It was our most complete game of the season in all three phases. “All in all, a great win. Anytime you can go on the road in this league and win like today, it’s very good for the football team.”

To make a good day even better, the Bulldogs (7-1 overall, 5-0 Southern Conference) took sole possession of first place in the conference with a win and Chattanooga’s loss to Furman.

The Bulldog defense was definitely the best story, keeping The Citadel’s option out of the end zone. The Citadel had 255 rushing yards but only managed a field goal. The Citadel failed four times and lost three of them. Noah Martin had 12 tackles, Kourtlan Marsh had nine tackles and a forced fumble, Joseph Mera had two sacks and Seth Simmer had six tackles and a sack and Trey Elston had a 53-yard touchdown return on a fumble recovery.

Offensively, it was probably more efficient than explosive, but quarterback Michael Hiers had another big day. He was 30 of 35 for 260 yards with touchdown passes to Kendall Watson, DJ Rias and Chandler Smith. Watson had 10 catches for 113 yards, Rias had eight catches for 66 yards and Smith had six catches for 40 yards.

SOUTH ALABAMA 31, ARKANSAS STATE 3: The Jags shook off the upset of a loss to Troy and qualified for a bowl game with a lopsided road win. LaDamian Webb carried the ball for a 69-yard run on the Jags’ opening snap and finished with 162 yards on 28 carries. Quarterback Carter Bradley was 17 of 24 for 179 yards with a touchdown pass to Jalen Wayne (three catches for 83 yards).

“What’s so fun about this is the way we responded as a football team,” South Alabama coach Kane Wommack said.

HUNTINGDON 42, GREENSBORO 0: The Hawks built a 35-0 halftime lead and cruised to a victory over visiting Greensboro.

Huntingdon’s defense allowed 237 yards on 72 offensive plays, with just 67 yards on the ground. Huntingdon got three sacks, recovered a fumble and Miller Park was intercepted. Linebacker Tucker Spence had a team-high 10 tackles and a sack and Martin Toby had five tackles and an interception for the Hawks (7-1 overall, 5-0 USA South).

“I’m really proud of the defense. They really deserved the shutout,” Huntingdon head coach Mike Turk said in a statement from the school’s athletics media relations office. “It’s a good team win and I’m proud of the boys.

BIRMINGHAM SOUTHERN 30, HENDRIX COLLEGE 7: With the dominant win at home, the Panthers improved to 6-2 overall and 4-1 in the conference.

TUSKEGEE 28, KENTUCKY STATE 7: The Golden Tigers not only completed the road portion of the regular season, but also clinched the SIAC West Division and a spot in the SIAC Championship Game. Quarterback Bryson Williams played a big role again.

Anderson completed 25 of 36 for 287 yards without an interception. Tucker had nine catches for 105 yards. The touchdowns covered 3, 4 and 35 yards. Running back Drexlan Allen chipped in with 82 rushing yards on eight carries with touchdowns of 35 and 13 yards. As a team, the Eagles had 257 rushing yards, with John Bolton adding 78 yards on 11 carries and Devon Murry contributing a 64-yard rushing touchdown.

CENTRAL ARKANSAS 64, UNA 29: The Lions fell into a 33-7 hole at halftime and never recovered from the road loss.

UNA running back ShunDerrick Powell provided the bright spot with 159 yards rushing, pushing him over the 1,000-yard mark for the season. He is the first Lions 1,000-yard rusher since Lamonte Thompson in 2015 and just the second to pass the Lions mark since 1997. It was also his fifth game of the season in which he rushed for 100 or more yards. Powell now has 1,115 yards on the season.

UNA allowed a school-record 733 yards and was the second-most points allowed in school history, behind BYU’s 66 in 2020.

WEST FLORIDA 36, WEST ALABAMA 24: A 57-yard touchdown pass from running back Demetrius Battle to Darius Nalls pulled the Tigers within seven points early in the fourth quarter. But nationally, ninth-ranked West Florida hit a pair of field goals in the final nine minutes to pull off its fifth straight victory.

Bry Webb and Battle combined for 118 yards, each with a touchdown. Quarterback Tucker Melton three for 198 yards with an interception. West Alabama’s defense buckled, but West Florida had to settle for five field goals and three touchdowns.