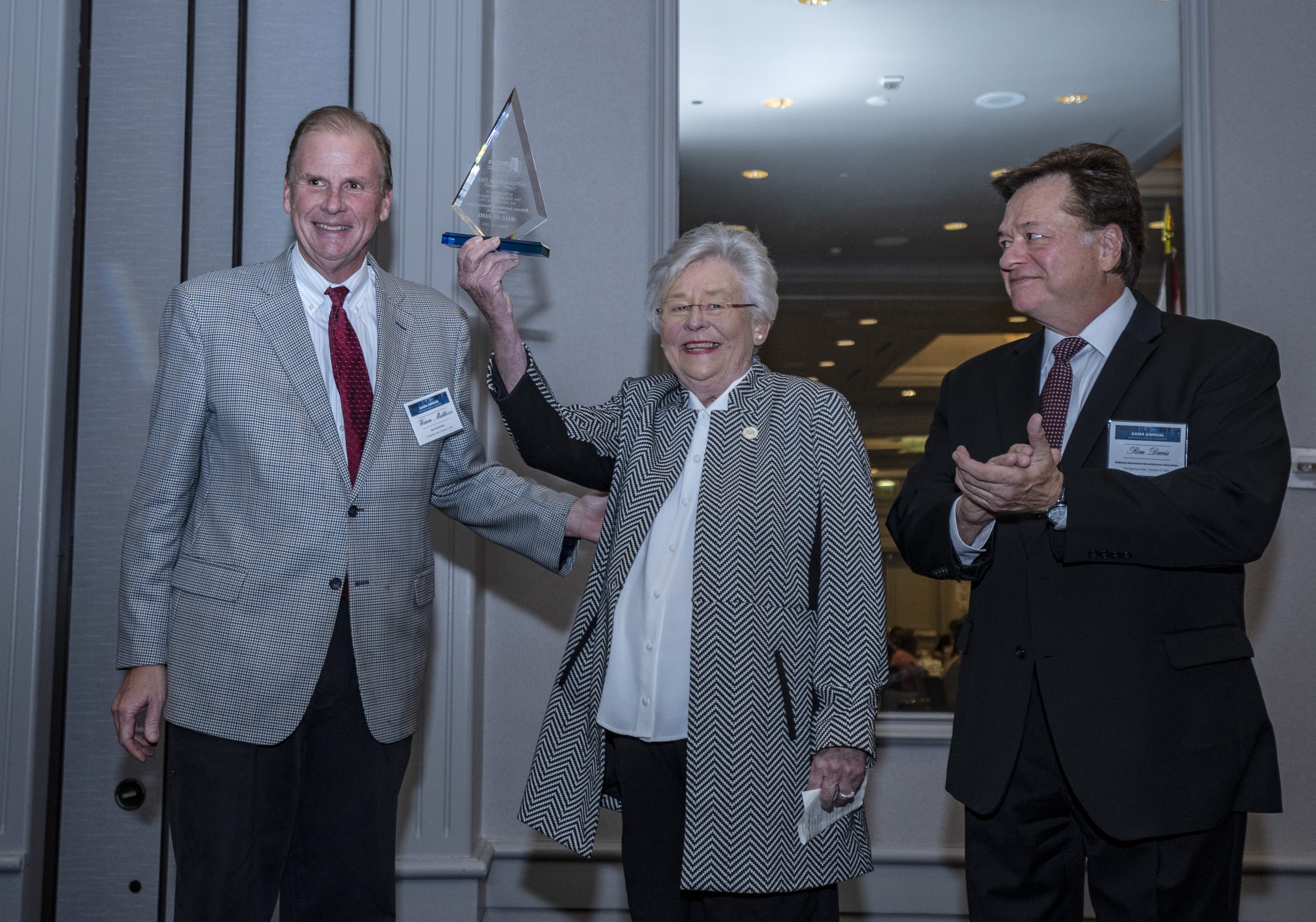 BIRMINGHAM — The Alabama Automotive Manufacturers Association (AAMA), a trade group representing companies in the dynamic and fast-growing industry, named Gov. Kay Ivey to its Hall of Fame at a dinner Thursday in Birmingham.

Ron Davis, president and chairman of the AAMA, praised Governor Ivey for her unwavering commitment to the growth of Alabama’s automotive industry and her many contributions to the organization’s overall mission.

“Governor Ivey has been an outstanding champion of this strategically important industry and has worked with AAMA for many years,” said AAMA President and Chairman Ron Davis. “I will fly her flag high because she has been fantastic to work with as the Alabama auto industry continues to grow and thrive.”

Governor Ivey said she was honored to be recognized by the AAMA at its annual dinner held at the Hyatt Regency Birmingham — The Wynfrey Hotel.

“This recognition means a lot to me, knowing that the automotive industry has been a major driver of economic growth in Alabama for more than two decades, providing high-paying careers for our citizens and world-class jobs for our communities.” Governor Ivey said. “The industry’s impact on Alabama has been tremendous, but what really excites me is how its future will be even brighter in our state.”

AAMA’s Board of Directors, comprised of key industry figures, elects new members to the organization’s Hall of Fame.

The AAMA Hall of Fame, which was launched five years ago, includes Bill Taylor, who led Mercedes-Benz US International; Ed Castile, Director of AIDT and Deputy Secretary of the Alabama Department of Commerce; and Dr. Bernard Schroer, a UAH professor who served in a leadership role in the early days of the organization.

Castile, a member of the AAMA Board of Trustees, congratulated Governor Ivey on her selection to the Hall of Fame.

“Governor Ivey is a longtime supporter of Alabama’s auto industry and has made a mark in the growth of our auto economy in her many previous roles as state leader.” Castile said. “As our governor, she ‘amped up’ her enthusiasm and determination to succeed as she guided us through the murky waters of the pandemic.

“Today, as we focus on electric vehicle manufacturing, Governor Ivey is laser-focused on continued growth through her unwavering support of the many workforce initiatives that will help Alabama realize the goals we seek.” he added.

State Sen. Gerald Allen was also named to the organization’s Hall of Fame in recognition of his support of the AAMA Scholarship Program, which works with the Alabama Community College System to build the workforce for the state’s automotive industry.

The AAMA was founded in 2001 to promote the success of Alabama’s current and future auto manufacturers and their suppliers to ensure the state is recognized as a global leader in the automotive world. It promotes the continuous education, improvement and growth of the automotive industry in Alabama.

AAMA’s “Impact Award” winners, which recognize outstanding contributions to the industry, are: