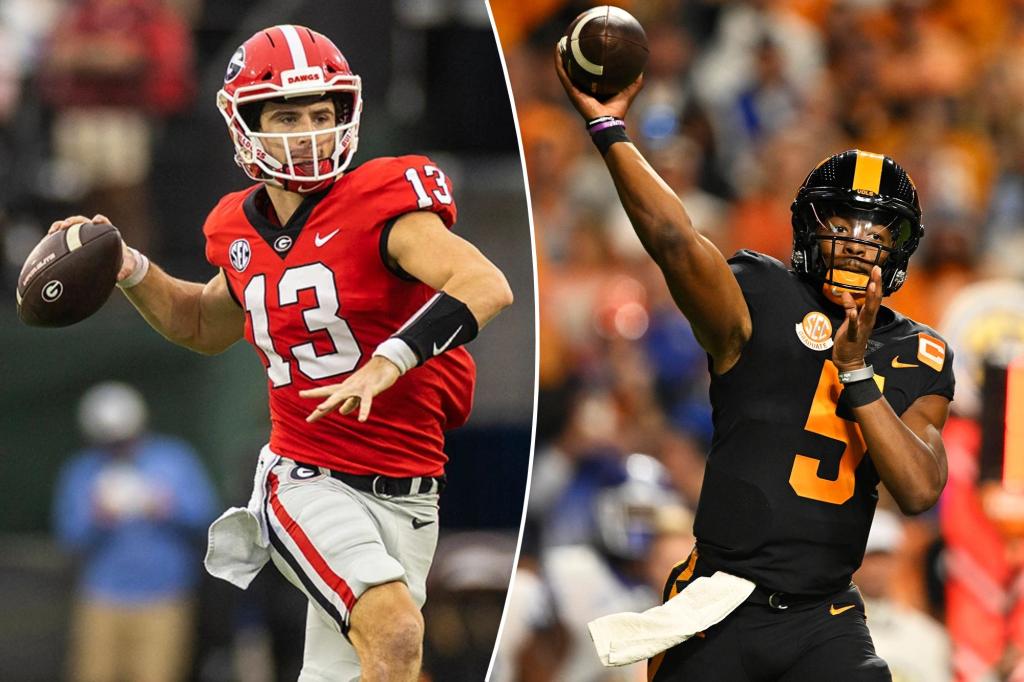 Everyone seems to be in favor of a new 12-team College Football Playoff arriving either next year or the season after.

It will be more inclusive and expand the playing field beyond the usual suspects. It could balance the top sport because there will be more programs on the biggest stage. It’s a win for college football and I fully agree with tripling the playoff numbers.

One thing it won’t do is give us a regular-season matchup like Saturday’s Georgia-Tennessee showdown or the Thanksgiving weekend blood feud that is Michigan-Ohio State. It will shorten the regular season, at least as far as the top teams in the country are concerned.

For now, though, here’s how the four-team playoff works: It can still offer these must-win games, such as the contest in Athens, Ga., next Saturday afternoon. Georgia and Tennessee will enter the game undefeated, both coming off impressive hitting from their opponents, Georgia will grow up in Florida for the “World’s Greatest Cocktail Party” and Tennessee will treat Kentucky like a sparring partner.

As they say in boxing, one’s “O” has to go. The winner also secures a place in the playoffs. The loser finds himself in a very precarious position. So much is on the line between the famous Sanford Stadium hedges.

Both teams have a high streak of wins: Georgia blanked Oregon by one loss in Week 1 and Tennessee held off Alabama two weeks ago. Losing, if not lopsided, wouldn’t ruin a single resume. But a team that suffers its first loss will need help, namely that Alabama doesn’t lead the table and win the SEC Championship, because the odds of getting three teams in a powerhouse conference are extremely unlikely.

It’s an intriguing heavyweight matchup, with Georgia having won 26 of its last 27 games and looking to repeat as national champions, and Tennessee enjoying its best season since winning in 1998. Volunteers second scoring offense vs. Bulldogs second – ranked scoring defense.

Soon, college football won’t be able to offer these kinds of bets this time of year. Enjoy it while you can. Georgia-Tennessee and Michigan-Ohio State will give us regular season drama in a few weeks, with undefeated teams playing for the playoff bids at stake. The new playoff format has many positives. But games like that before the postseason aren’t one of them. Instead, they will be up for sowing in the not-so-distant future.

Now onto the other side of the playoffs, why was expansion so necessary. Oregon clearly wasn’t ready for the season opener against Georgia, as the 49-3 score indicated. The Ducks have certainly looked it since, scoring at least 41 points in each of their last seven games, winning all of them, and sitting alone atop the Pac-12.

Even if they win and handily beat USC by one loss in the conference title game, a playoff spot seems about possible as Nets coach Steve Nash is coming off a season. This ugly loss is a scratch on the resume and there are simply too many other contenders with better wins from better conferences to jump. But if this was a 12-team playoff? Oregon would be a close lock if it continues at its current pace.

This was a bad weekend for the ACC and the Big 12. No, their top teams — Clemson and TCU — didn’t lose, but the teams behind them did. This is not good for Clemson and TCU. Oklahoma State was swept by Kansas State. Wake Forest and Syracuse lost to Louisville and Notre Dame. These results lower the overall quality of the conferences and could make it more difficult for Clemson and TCU to make the playoffs.