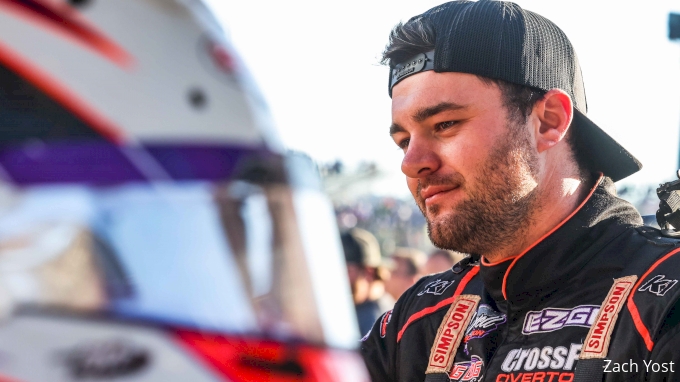 PHENIX CITY, Ala. — Brandon Overton started and finished first in Saturday’s National 100, but that fact doesn’t tell the story of his second straight win in the Super Late Model marquee at East Alabama Motor Speedway.

Thanks to a flat tire on lap 23 — just like his younger brother Cody Overton — the 31-year-old superstar earned every penny of his $30,000 first-place check.

After pitting for new rubber while battling his sibling for the lead, Overton made his way through the pack to retake command from Cody on lap 54 and was not headed after that. He kept his brother at bay before crossing the finish line with a 0.985-second lead over Tyler Erb of New Waverly, Texas.

“They made me work on it,” said Overton, who led laps 1-9 and 22-23 before stopping in the third turn with a flat tire. “We had to go back, stay out of the wrecks, and man, our car (the Wells Motorsports Longhorn) was just … I’ve had good ones here before, but this is tops. It would drive right there like a go-kart.

“Hats off to my crew, they worked on it all weekend. They made my job easy.”

Joseph Joiner of Milton, Fla., who won the 2020 National 100, moved into third on lap 93 to finish in that position. Hawkinsville, Ga.’s Wil Herrington, who won the 604 Crate Late Model feature earlier in the day, finished fourth after running as high as second at the start of the race, and JR Moseley of Columbus, Ga. completed the top five.

Cody Overton of Evans, Ga., who celebrated his 24th birthday on Oct. 18, rallied from the eighth starting spot to lead laps 10-21 and 24-53 before retiring on lap 83 to finish 12th on the restart in 76th. he dropped from second to fifth a lap later and slowed seven laps later after losing oil pressure in his Benji Cranford-owned Barry Wright race car.

But before his heartbreaking departure, Cody Overton gave his nationally famous brother all he could handle. He worked his way up to second by lap eight and two laps later slipped past Brandon to take command of a car he didn’t secure until Thursday night when Cody had a crew member retrieve the machine from Cranford’s Georgia shop.

“I told him what tires to put on before I went there and he said, ‘Oh, I’m probably not going to be that good anyway,'” Brandon said. “But he obviously put the right tires on. He might have won the thing.”

Brandon ran second behind Cody in laps 10-14 and 47-53 – and was smiling in his helmet the entire time he was watching Cody’s rear spoiler.

“He’s doing so well, trying so hard,” Brandon said of Cody. “I was just watching him (lead) and I know what that feels like. I used to be one, so it was a proud big brother moment, I guess you could say.”

Brandon eventually worked his way past his less experienced brother to take the lead for good on lap 54. He wished Cody could have stayed behind him until the checkered flag, but he knows Cody was excited about the laps he spent battling for first place. .

“I’m sure he won’t forget,” Brandon said. “I know how much it means to my parents to watch us both race, to be out on the same track and both at the front. That’s pretty cool.”

Cody didn’t have much fun with his brother after the race, but during their brief encounter, he did get a pat on the back from Brandon.

“He said I did so well … he was happy for me and we’re going to make it right,” Cody recounted after his first career start in the National 100 headliner. “I didn’t even care about the money I wanted to throw him out.” Hopefully one day we’ll get to (beat Brandon).

Cody dreams of matching his brother’s glittering resume, which after Saturday includes 14 wins and over $600,000 in earnings. The triumph was his second of the season at East Alabama — he won the Jimmy Thomas Memorial-sanctioned $10,053 May 7 Schaeffer’s Spring Nationals — and he became the 11th different rider to win the National 100 at least twice since he was born in 1975.

“There’s a lot of them that I looked up to,” said Brandon, whose name is on the National 100 hit list. “I remember sitting in those stands and watching guys like Randle Chupp just get going. It’s amazing. This is one of my favorite race tracks. It means a lot to me just growing up here.

“Everyone here is doing a great job trying to build the (EAMS) backup. I hope everyone comes to support it next year. They are doing everything they can and I appreciate that.”

Tyler Erb, who started fourth in his Best Performance Motorsports Rocket, chased Brandon Overton from second over the final 24 laps of the race. The 25-year-old was never more than 2 seconds behind, but was unable to seriously challenge for the lead.

“I definitely didn’t want to get into the lead early, then I found the rubber a little bit when I was racing Jimmy (Owens) for a top-five spot,” said Erb, who has only started in the national 100 in 2019. He also finished second. “I was like, ‘OK, just keep it up.’ I figured Brandon pitted or something when he ran out of the stretch (on lap 23). I tried to stay in front of him (when Overton came back into contention) as long as I could and when he finally got to me I gave it two good chances around lap 80. And with five left I tried to run really hard but I just couldn’t keep up with him.

“I needed to stay in front of (Brandon) because he was definitely the car to beat.

Joiner, 29, started 17th in his first start with a Longhorn car recently added to his stable by his family’s Hunt the Front team. He moved into the top five after a restart on lap 76 and reached the final third position on lap 93.

“I think we were a little too hard on the rubber,” Joiner said. “I just picked it a little bit wrong and didn’t have the right balance.

“I think we have a lot to build on in the first weekend in this race car. We will take third place. It looked pretty tough there in the first quarter of the race. I was definitely concerned, but we got back up, had some breaks and did some things.”