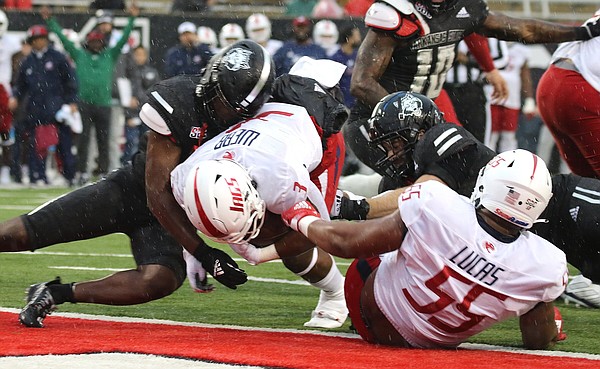 JONESBORO — For half an hour Saturday night, the clouds parted and sunlight crept in, a rainbow filling the golden-colored sky above Centennial Bank Stadium.

But the rain kept falling — literally and figuratively — on the state of Arkansas.

The Red Wolves lost their fourth straight game, struggling mightily against the elements and South Alabama’s defense as the Jaguars kept ASU out of the end zone and cruised to a 31-3 victory. South Alabama running back La’Damian Webb single-handedly paced the Red Wolves, setting career highs with 162 yards and 3 touchdowns on 28 carries.

ASU managed 158 total yards — a result minus 19 rushing yards and four sacks by the Jaguars — as the Jaguars kept getting pressured on quarterback James Blackman and his convoluted offensive line.

“It’s unacceptable the way we played football in the line and we can’t tolerate that,” ASU coach Butch Jones said. “I thought James showed pocket mettle, did some really good things. But at the end of the day, you’ve got to protect what’s ours — that’s the football, that’s our quarterback, that’s our scrimmage.”

Although Blackman and running back Johnnie Lang returned to action after missing most or all of last season’s game at Louisiana-Lafayette, the Red Wolves had to step things up when right guard Jordan Rhodes was out.

Freshman Aleric Watson made his collegiate debut at left tackle with Makilan Thomas moving up to take Rhodes’ usual spot.

But it was on the other side of the ball where South Alabama hurt ASU (2-7, 1-5 Sun Belt Conference) for the first time. Webb scampered 69 yards from scrimmage on the first play, putting the Jaguars in the red zone just seconds into the game before scoring four plays later.

Neither team could get much offense going as the rain started midway through the opening quarter, with the Red Wolves and Jaguars dropping two of three. But South Alabama (6-2, 3-1) found another explosive play to double its advantage.

Toledo transfer Carter Bradley connected with a wide open Jalen Wayne for 49 yards and a touchdown, charging the defense with four cornerbacks and playing safety KaRon Coleman on the outside.

“[The coaches] he gave us the perfect call, we just didn’t execute,” ASU safety Eddie Smith said. “We should have had the safety in the post and we didn’t communicate well enough.

Although ASU managed to start several of its drives with better-than-average field position — six of the Red Wolves’ 15 possessions started on their 40-yard line or better — they only gained 10 or more yards on four. The Jaguars’ defense often sent other rushers, and even with ASU in maximum protection scenarios, the Red Wolves were unable to develop any type of threat downfield.

ASU’s longest play of the day was a 42-yard pass from Blackman to Jeff Foreman that set up Dominic Zvada’s 32-yard field goal. The rookie has made 13 field goals without a miss this season.

“Once you start doing something good, a lot of teams stick with it and just do it and do it until you find a way to counter what they’re doing,” Blackman said of South Alabama’s defense. “We didn’t expect them to push like they did [and] like they did today.”

With Coleman and Watson getting the nod in the Red Wolves’ starting lineup on Saturday, ASU has used 40 different starters through its nine games.

Jones detailed the point again as the Red Wolves enter their bye week, a much-needed relief, both health-wise and morale-wise, after a tough two-month stretch.

“I hope our younger players don’t forget that,” Jones said. “Your intensity level, the way you practice, the way you approach things — all those things, you create habits. It’s something we try to instill in this young football team.”