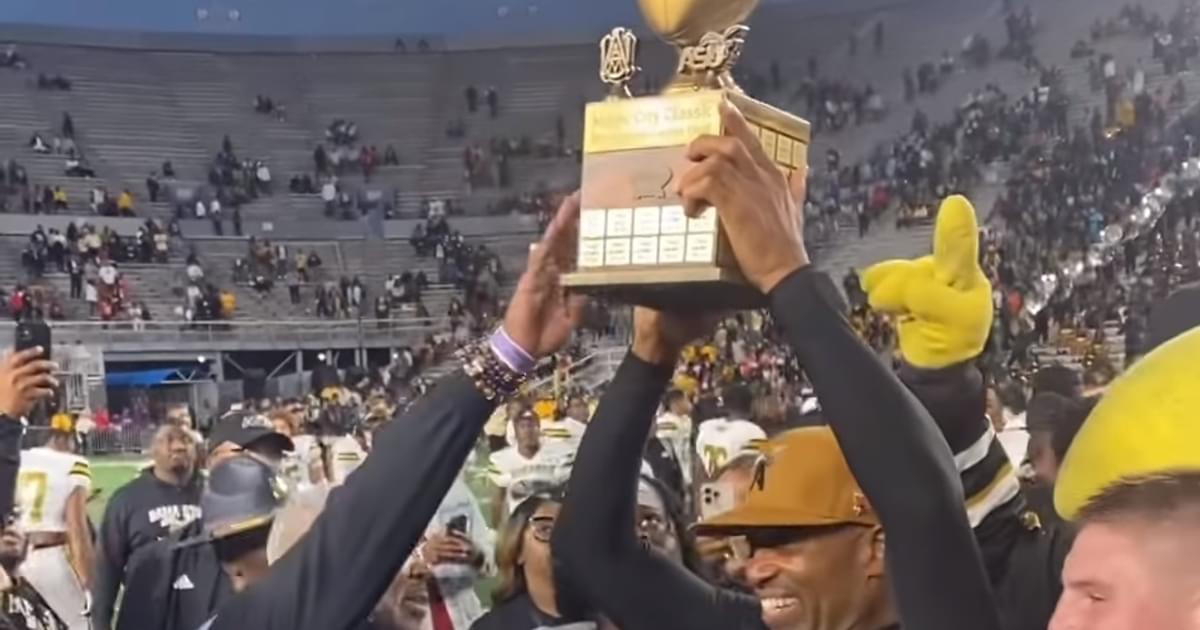 The state of Alabama can once again call themselves Magic City Classic champions. As expected, it wasn’t easy.

The Hornets scored the goahead touchdown on a 23-yard pass from Dematrius Davis to Jeremiah Hixon, then held on as Alabama A&M drove four yards short of a potential game-tying touchdown. When the clock finally struck zero at Legion Field, Alabama State won 24-17 for its first Magic City Classic victory since 2017.

Eddie Robinson Jr., who was 3-1 against the Bulldogs as a player, won his first Classic as Alabama State’s head coach. His first had a lot of drama.

The winning touchdown came on a six-play, 81-yard drive that seemed to stop the moment it started. After three games, the Hornets faced 3rd-and-20 from the ASU 9-yard line. Davis bought time by stepping into the pocket and finding a wide-open Darius Edmonds for a 42-yard gain. Three plays later they were in the end zone.

Alabama A&M (3-5 overall, 3-2 SWAC) had 1:56 to counter and the Bulldogs almost did. Quarterback Quincy Casey threw 18 yards to Terrell Gardner and 16 yards to Cameron Young to set the drive in motion. The Bulldogs faced 4Thursday-and-5 from the ASU 26-yard line and converted on a 17-yard pass from Casey to Micah White with 19 seconds left. After the incompletion, Casey threw a quick screen to Young, who had to reach behind him for the catch and lost his balance at the 4-yard line. The Bulldogs couldn’t muster another shot.

The game did not start with the same tension.

Alabama State (5-3 overall, 3-2 SWAC) controlled the early part of the game but didn’t have much to show for it. The Hornets used an eight-play, 34-yard drive to take a 3-0 lead on a 49-yard field goal by Aubrey Grace with 47 seconds left in the first quarter. The drive started with a 26-yard pass from Dematrio Davis to Jaelyn Lay.

At that point, the Hornets defense was dominating the Bulldogs offense. They did it again on the next series, and Alabama A&M made a change at quarterback, subbing in Quincy Casey for starter Xavier Lankford.

This move quickly paid off.

Casey got the ball to Cameron Young on a short route on first down. Young spun away from one defender, split two more defenders and raced 61 yards before being pulled down at the Hornet 10-yard line. A pair of Donovan Eaglin runs netted eight yards before Casey delivered a ball that Isiah Cox scooped up for a touchdown. The Bulldogs led 7-3.

On the next play from scrimmage, Davis attempted to deliver a screen pass outside. Jamal Irby, ?? defender, shed a block, tipped the ball with his right hand, took a few steps before catching it and ran six yards for the score. That quickly gave the Bulldogs a 14-3 lead.

It was just part of a sensational first half by Alabama A&M’s defense. Alabama State had 67 yards of offense, only 17 yards on the ground. The Hornets had 32 snaps, six first downs and were 4 of 10 on third down. Alabama A&M had 197 yards on 29 plays, 151 of which came through the air.

Both offenses struggled early in the second half. A big mistake by the Bulldogs’ special teams changed the complexion of the game. Alabama State’s Dante Norris dove into punt coverage and caught the ball in mid-air after it bounced off Cox, who was back to return the punt for the Bulldogs. The Hornets started at the 23-yard line and eventually scored on a 9-yard pass from Davis to Kisean Johnson. Alabama State was down 14-10.

After forcing a three-and-out, the Hornets were at it again. This time they put together an 8-play, 42-yard drive that ended with Jacory Merritt’s 4-yard scoring run with 13:56 left.

Alabama A&M was able to put together a clutch drive that ended with a 37-yard field goal by Victor Barbosa. This set up an exciting conclusion.