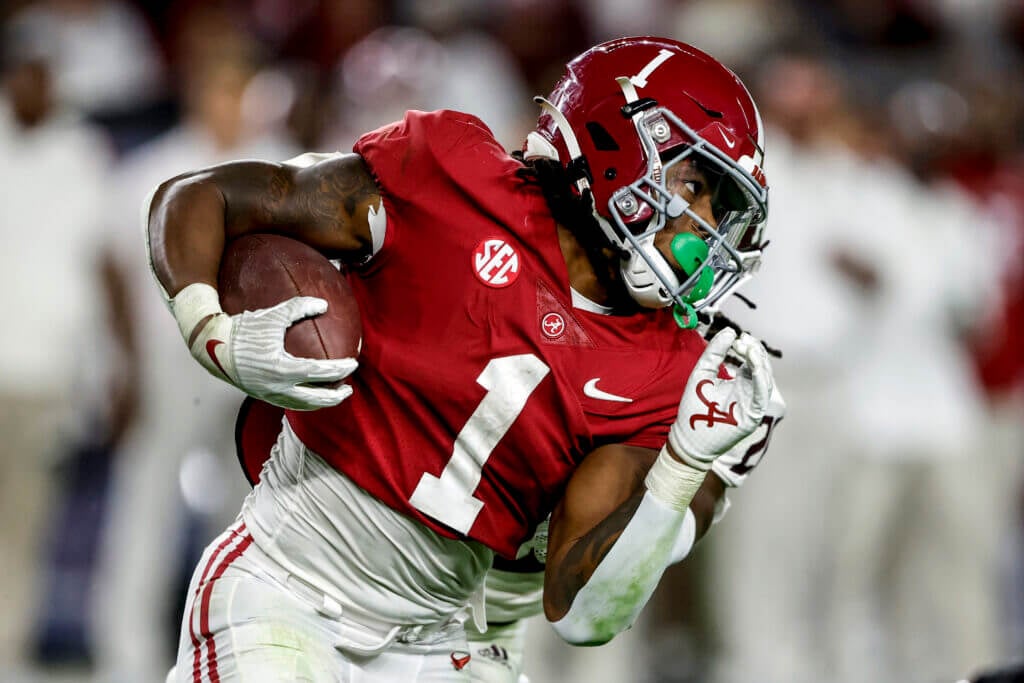 Alabama’s bye week comes at an opportune time as the No. 6 Crimson Tide (7-1, 4-1 SEC) have been battered in several areas, including on the defensive line, where Justin Eboigbe is out for the season with a neck injury. and DJ Dale and Jaheim Oatis will try to turn back the clock on the LSU game after missing the Mississippi State contest.

The week should also be beneficial for quarterback Bryce Young. He showed no signs of being out after missing the Texas A&M game with a sprained shoulder, but a week without a game should definitely help his recovery.

Now is as good a time as any to revisit some preseason predictions for what we think this Alabama team could be. Some are easier to dissect than others.

The schedule allows for an easy path to the national championship

We were dead with this one. Of the legitimate College Football Playoff contenders, Alabama has faced the toughest power of schedule so far (seventh overall) according to ESPN’s College Football Power Index and has the No. 4 power of record.

Even though the Crimson Tide wasn’t quite the team we thought they would be, it was always going to be difficult to get through the schedule. I wrote many words about a three-game stretch in October at Arkansas, Texas A&M and Tennessee, and one of those games really jumped out and bit the team. Even the wins were closer than expected.

Even the road race in Texas at the beginning of the season was not easy. And with draw games remaining at LSU and Ole Miss, a second or even third regular season loss is within the realm of possibility. If you had told anyone at the beginning of the season, I’m not sure they would have believed you that Alabama could potentially lose three regular season games. But here we are.

That’s uncertain because Alabama hasn’t been as dominant as it’s capable of being, and the schedule is downright tough.

Part of that is that the SEC has closed the gap on Alabama’s dominance. That’s both the Alabama thing and the transfer portal thing. The transfer portal is a great equalizer in some ways. It allows programs to rebuild their list faster than before. We’ve seen it with Ole Miss this season, as well as with Tennessee, given that Virginia Tech transfer quarterback Hendon Hooker is now one of the Heisman Trophy favorites.

The schedule is also proof that not all conference programs are created equal. With apologies to some other contenders like Clemson, the schedules aren’t comparable, which is why SEC Commissioner Greg Sankey is wise to protect as many at-large bids as possible in the CFP expansion.

We got this right. Shooting for the Crimson Tide schedule has been a favorite pastime for many college football enthusiasts. But this year, that’s just not true. 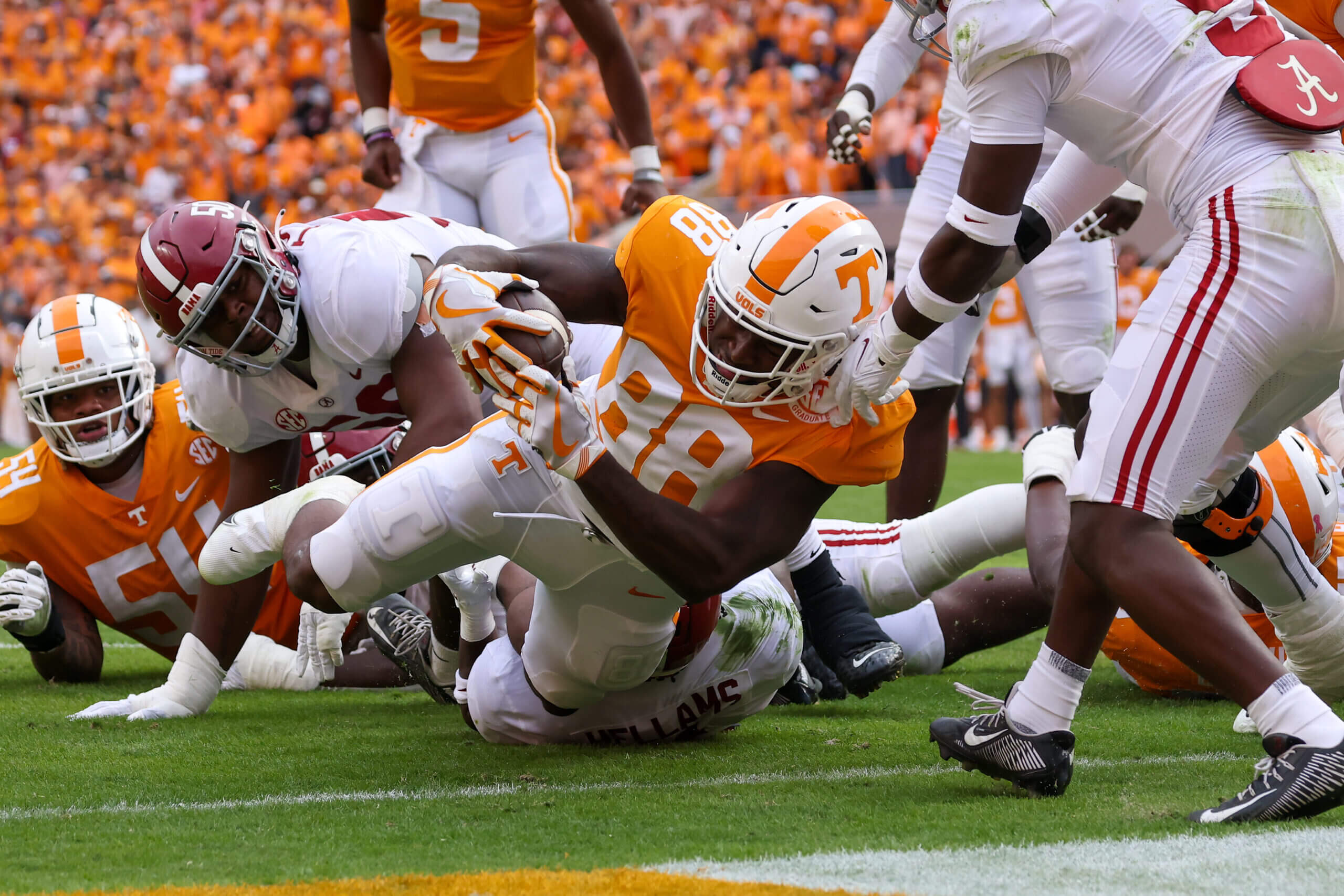 Alabama lost to Tennessee for the first time in the Nick Saban era. (Randy Sartin/USA Today)

Wide receivers aren’t what they’ve been in recent years

Boy did we do it. What was one of the biggest question marks before the season is now an outright concern after eight games. There is still no defined go-to wide receiver. On the one hand, this is good because the defense can’t shadow coverage to try to take one player away. On the other hand, when there’s a play to be made, there’s no receiver that you feel comfortable saying, “That’s the guy.”

There is no Jameson Williams. There is no John Metchie. And we didn’t expect there to be one in this year’s wide admissions corps. However, we expected more production. Alabama’s leading wide receiver in yards per game this season is Ja’Corey Brooks, last year’s Iron Bowl hero. His 47 yards receiving per game is 22nd in the SEC. At one point this season, he seemed to have turned a corner on his journey to becoming a man. He had four consecutive receptions, including a touchdown, against Vanderbilt. That one drive accounted for nearly 20 percent of his production on receptions (21).

Alabama’s most consistent receiver isn’t really a receiver at all. Jahmyr Gibbs’ 31 receptions are tied for first on the team. His 301 receiving yards are third and his three touchdown passes are tied for third. We knew Gibbs was going to be a weapon, but it’s kind of telling that he leads the team in catches.

The return of JoJo Earle helped. He’s a big game, averaging 20.4 yards per reception, but he caught just five passes, two of which went for touchdowns. The longest completion of the season was 53 yards to Isaiah Bond.

The group’s biggest problem is what appears to be an inability to get out of coverage. This is especially evident with a quarterback who has the ability to extend the play. But even in extended games, there are too many times when Young is unable to find an open receiver.

There are moments he has too, like last week’s first touchdown pass to Earl. But the receivers’ play has been inconsistent at best, even though Nick Saban said he sees the unit developing.

“I think they’re playing better and I think it’s important that they continue to improve,” Saban said after the Mississippi State game.

For the team to be able to compete for a championship, this group needs to be more consistent.

Let me start by defining what I mean by that. I don’t presume to know the intricacies of an offense installed every week. It would be foolish to think or act as I do. So I don’t want to go too far over the skis on this one. What I meant when I first wrote this, and what I mean now, is that I thought the offense would be able to run the ball when it wanted to. It just wasn’t like that.

We can all see what a talent Gibbs was. He’s averaging 84 rushing yards per game and has almost single-handedly put up explosive runs. However, the offensive line was unable to provide consistent pressure to make this offense the punishing offense it could be.

In his postgame remarks after Mississippi State, Saban noted that the offense is unable to take advantage of the things built into the offense.

“We couldn’t run the ball very well; he affects the passing game with play and action,” Saban said.

And for a pro-style offense, which are essentially the concepts that Alabama’s offense is built on, not having an effective action pass game is a killer. That’s just how Alabama is.

The lack of consistent short-distance running is also concerning for the second year in a row. On third downs with 1-3 yards to go this season, Alabama has run the ball 17 times. It has converted nine of those opportunities into first downs and ranks 129th with an average of 0.82 yards per carry in such situations. By comparison, Georgia, which ranks sixth in the conference in rushing (Alabama is fourth), has 22 third downs with 1-3 to go, converting 14 of those chances and averaging 5.23 yards per carry.

There was a moment near the end of the Texas A&M game where Alabama could have ended the game with a first down. But the offensive line couldn’t come through, the running back was stopped on third down, the offense was forced to punt, and Texas A&M had the ball on the Alabama goal line with a chance to win. You get the point.

I thought the offense would look different because I thought the team could run the ball effectively when they wanted to. The stats aren’t bad. As noted above, Alabama ranks fourth in the SEC in rushing — and second in yards per carry. But when that needs run the ball, he has trouble doing it. I didn’t expect it to be like that. 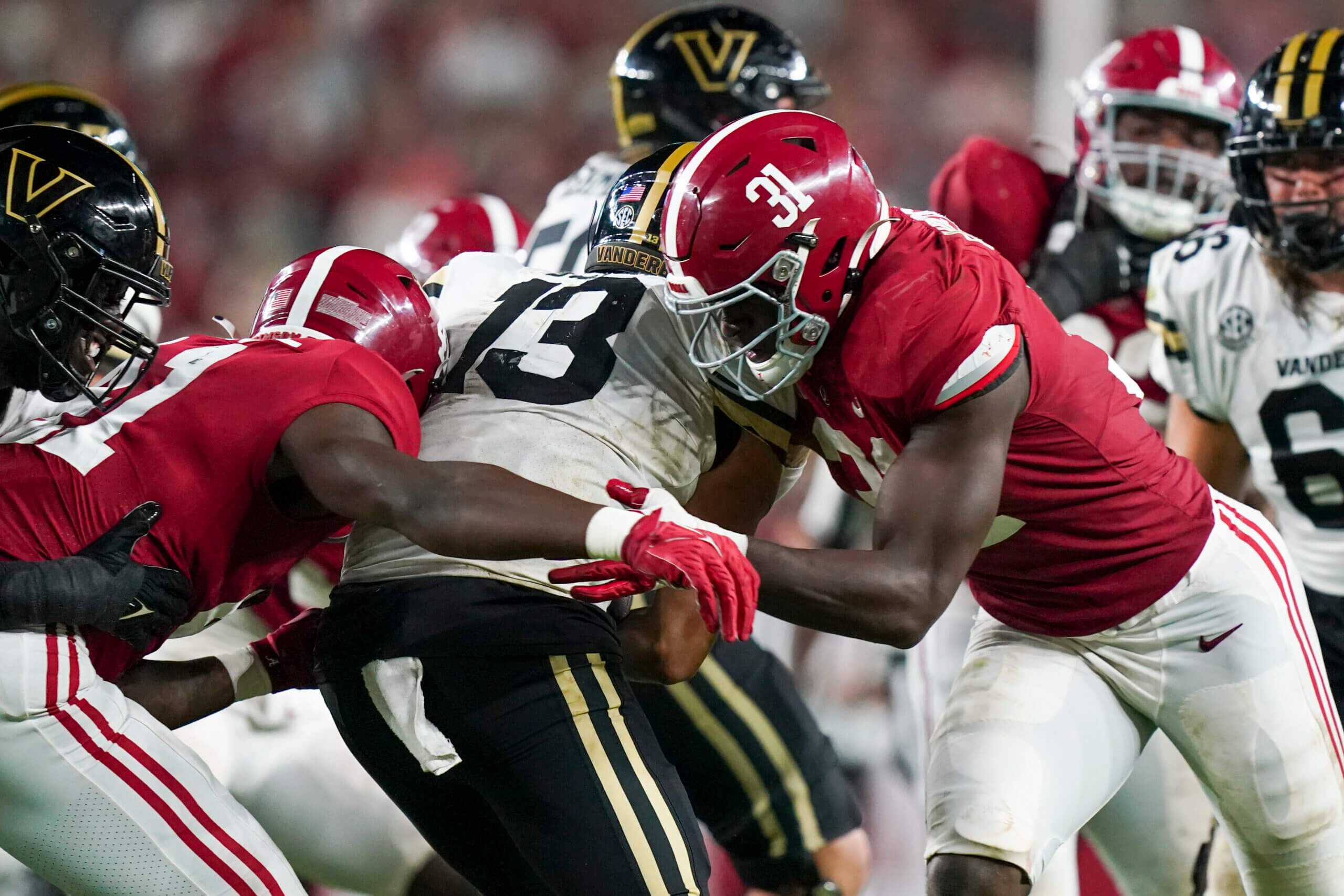 Will Anderson is fourth nationally with 12 TFL. (Marvin Gentry/USA Today)

The defense is the best since 2017

This one is sure to ruffle some feathers, especially since it’s written so close to the Tennessee game. Had the trip to Knoxville gone differently, the statement would not have sparked much protest. I still think it shouldn’t be, and that’s because the defenses that came after 2017 weren’t classic Saban-era defenses. To make that statement true, it’s only in competition with last year’s defense, which finished seventh in total yards (304.1), 11th in yards per game (4.8) and 18th in scoring (20.1). This year’s defense is 15th in total yards (295.6), seventh in yards per game (4.3) and 11th in scoring (16.6).

In half of the games, the defense allowed fewer than 10 points, including a shutout. It nearly had its second shutout of the season last week before Mississippi State scored on the final play of the game. It’s the Tennessee game that has skewed the view of this defense.

It’s not the defense of 2017. It never will be. But he still has a chance to be the best defense from that unit. What is noticeably missing from this year’s group are sacks and turnovers. The Crimson Tide is 15th in sacks with 23 and has forced just six turnovers, which is tied for 121st. According to TruMedia, the defense ranks 38th in pressure rate (35.3 percent sacks) and 34th in sack rate (7.6 percent).

It’s inexplicable that a defense as talented as Alabama has trouble forcing turnovers. But it’s on the rise with five of six forced turnovers in the last four games.

The last time we saw the group, it was rebounding from a miserable performance against Tennessee that in retrospect looks more like a bad game than an indictment of the entire defense. But there are also tough upcoming assignments, including road tests against Ole Miss and LSU. Eli Ricks, cementing his spot at cornerback after his first start for the Crimson Tide, would go a long way in settling the secondary. He was targeted 10 times against Mississippi State and had four pass breakups and allowed just one completion, per PFF.

This could go either way, but I’m sticking with the original verdict.

Alabama’s offensive line will decide the outcome of the season

I changed direction for one reason. Alabama didn’t have the best offensive game last year and could have won the national championship if the wide receivers had stayed healthy. So I’m left with two theories on how Alabama could win the national championship this year. No. 1: Offensive line starts overpowering defense to the point where the running game becomes dominant. No 2: Wide receivers are starting to play at a level where the offense is becoming explosive. Which of the two is more likely? If a couple of receivers just took a step forward, a group that becomes more consistent is more plausible to me.

As I wrote above, I thought the offensive line would set the table for a dangerous running game to complement the passing game. It did not happen. That’s why I wrote that their importance was key.

Let’s also get this straight: The offensive line is better than it was in 2021. While it’s true that Evan Neal is gone, JC Latham was pretty good at right tackle. According to PFF, Latham has allowed no sacks and has an 89.8 pass-block grade and a 0.7 percent pressure rating allowed. The line has allowed 12 sacks this season in eight games. Last year, it allowed 41 of 15. Alabama ranks just 59th in pressure rate allowed per TruMedia, but it’s up to 103rd.

My point is that the pass blocking was better. The run blocking has been similar even with explosive runs active.

So the offense was better, but the team is on a similar trajectory to last year.